If there is one trophy in the sport of Jumping that every athlete wants to win, it’s the Longines FEI World Cup™ which has been raised in triumph by the world’s greatest stars. And if there is one place where riders would most like to record that victory, it is in the city of Gothenburg (SWE) where Austrian legend, Hugo Simon, was the first man to claim the title 37 years ago.

A unique quality sets the winning horse-and-rider partnerships apart, because success in this series has been consistently marked by a large measure of determination combined with raw talent, keen judgement, courage and, most importantly of all, a truly exceptional horse.

The story of the FEI World Cup™ Jumping Final is one of heroic duos often defying the odds to emerge triumphant, and sometimes simply in a league of their own. And as athletes from all across the globe gather in the Scandinavium Arena in Gothenburg next week for the latest seasonal finale, another fascinating page of the compelling FEI World Cup™ Jumping history book will begin to unfold.

As the sport of Jumping has continually developed, the number of FEI World Cup™ qualifiers has expanded to 15 leagues world-wide, stretching across Australia, New Zealand, Japan, South East and Central Asia and China, and on to North and South America, South Africa, the Middle East, Caucasia and Central and Western Europe. In all a total of 108 qualifying events have taken place this season, providing a platform for many athletes from less developed regions to up their game. The best of the best have now emerged, and 38 of them will line out when the action gets underway next week.

German riders have dominated the winner’s podium over the years with a total of 10 victories, and this year’s Longines Final line-up suggests they will again be the ones to beat. Marcus Ehning is one of four athletes who have won the FEI World Cup™ Jumping title three times, so another success would set a new record. Daniel Deusser is the most recent German winner, coming out on top in Lyon (FRA) in 2014, but with Marco Kutscher and new young star Niklas Krieg also in the hunt, it’s anybody’s game.

And then of course there’s 2011 FEI World Cup™ Jumping champion Christian Ahlmann who has swaggered to success at three legs of the Western European League series and who looks to be on the form of his life. It seems the German contingent will be tough nuts to crack, but there is nothing predictable about this Final which has provided more than a few surprising moments throughout its long and rich history.

American riders, so dominant over the early years of the series, have made a strong come-back since Rich Fellers and the super-tough stallion, Flexible, broke a 25-year drought back in 2012 only to be immediately followed by a win for Beezie Madden in 2013. That brought the tally of US wins to nine and, backed up by seven other riders who will be flying the Stars and Stripes including 22-year-old Katie Dinan who will be lining out at her fourth Final, the phenomenal Fellers and Flexible will be back in business once again this time around.

They are always headline-stealers wherever they go, not just because this horse has fought back from career and life-threatening injury and illness so many times, but also because the stallion is now 20 years of age and still fighting fit and rearing to go. It was in ‘s-Hertogenbosch (NED) that they pipped Steve Guerdat and Nino des Buissonnets for the title four years ago in a thrilling two-way third-round head-to-head, just a few short months before the Swiss duo went on to take individual gold at the London 2012 Olympic Games. And 12 months later Guerdat was again the bridesmaid, beaten in a timed decider by Fellers’ compatriot Beezie Madden.

Guerdat had to wait another two years before he got his hands on the coveted trophy in Las Vegas (USA) last April where, true to tradition, the result hung in the balance to the very end and spectators all across the world were gripping the edges of their seats throughout the closing moments. Guerdat really wanted that win.

“I’ve been trying a long time … and I’ve come close so many times. It’s the third time I was in the lead going into the final competition, and today I nearly messed it up again! Coming to the last I was riding more like a cow-horse rider! But I’m so happy, I feel blessed!” he said at the end of that dramatic day.

A typically gutsy effort from Fellers and Flexible saw them sharing the lead with Guerdat and Albfuehren’s Paille going into the last of the three competitions, but it was French woman Penelope Leprevost who eventually finished in runner-up spot behind Guerdat, and there’s no doubting the strength of the French challenge again this year.

Leprevost led a French cavalry-charge at the opening leg of the Western European League series in Oslo (NOR) where European individual bronze medallist, Simon Delestre, lined up second and Patrice Delaveau finished third. Delestre is now world number one on the Longines rankings and Leprevost, who went on to bag another victory during the qualifying season, is ranked fifth. With Kevin Staut also on the start-list it seems the French, whose only previous victory was recorded by Bruno Broucqsault and Dileme de Cephe in Milan (ITA) in 2004, may be about to address that imbalance this year.

While a host of others also arrive carrying their hopes and dreams, including representatives from Australia, Austria, Belgium, China, Egypt, Great Britain, Hungary, Ireland, Japan, Mexico, Netherlands, Poland and Saudi Arabia, the man with the biggest weight on his shoulders may well be Sweden’s Henrik von Eckermann.

Despite the fact that this is the 14th time for the FEI World Cup™ Jumping Final to be staged in Gothenburg, there has never been a Swedish winner, and as the only rider flying the host-nation’s flag there will, no doubt, be great expectations from the home spectators. The 34-year-old, who has worked with German star Ludger Beerbaum for some years now, is a cool character however and is unlikely to be fazed by the buzz of electricity in the Scandinavium Arena.

Like all the others, his focus will be on attempting to place his name on the Longines FEI World Cup™ Jumping Roll of Honour, which includes so many of the greatest partnerships in the sport. Ian Millar and Big Ben from Canada, Britain’s John Whitaker and the extraordinary Milton, Brazil’s Rodrigo Pessoa and Baloubet du Rouet and Germany’s Meredith Michaels-Beerbaum and the sensational Shutterfly are just a few of the legends whose names are intrinsically linked to the supreme title of indoor Jumping – the Longines FEI World Cup™.

38 athletes from 18 nations will compete.

Austria's Hugo Simon, winner at the inaugural Final in Gothenburg (SWE) with Gladstone, went on to record a back-to-back double of victories with ET FRH in 1996 and 1997.

Brazil’s Rodrigo Pessoa and the stallion Baloubet du Rouet hold the record as the only horse-and-rider partnership to post three back-to-back wins. They came out on top in 1999, 2000 and 2001.

Germany’s Marcus Ehning, winner in Las Vegas in 2003, in Kuala Lumpur (MAS), in 2006 and in Geneva (SUI) in 2010 will be attempting to become the first four-time FEI Wold Cup™ Jumping champion.

The youngest rider at this year’s final is 20-year-old Jos Verlooy from Belgium.

The oldest horse is the 20-year-old Irish-bred stallion Flexible, ridden by Rich Fellers. The pair claimed the title for the USA at ‘s-Hertogenbosch (NED) in 2012. 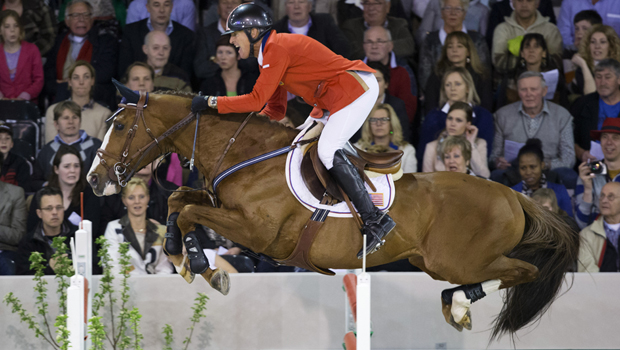 Germany holds the record for most wins in the FEI World Cup™ Jumping series with 10 in total.

Riders from the USA have claimed the title on 9 occasions.

This will be the 14th time for the FEI World Cup™ Jumping Final to take place in Gothenburg, where the inaugural Final was staged in 1979.