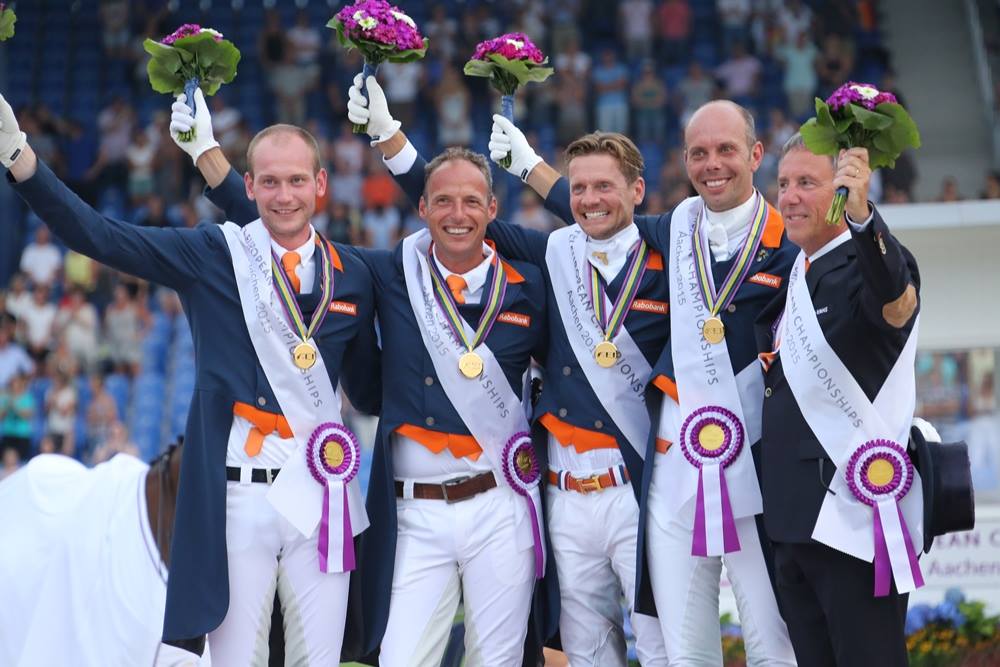 The Netherlands, today, saw off tough competition and 22 years of German dominance in the team dressage competition phase of the 2015 FEI European Championships in Aachen with Great Britain finishing in second. Charlotte Dujardin (GBR) riding Valegro headed up the Individual leader-board with an impressive score of 83.029.

Results, Individual Dressage After Round Two

The Dutch team proved they were still very much a force to be revered at the 2015 FEI European Championships today in Aachen, Germany. Both Hans Peter Minderhound and Edward Gal proved them and their team were worthy winners of the Gold medal by providing faultless displays and perfect precision.

The host nation were hotly tipped to claim the Dressage team title for the 23rd time however strong competition from the British and Dutch competitors proved this would not be the case.

Britain’s Charlotte Dujardin lead Great Britain in the Individual leader-board. The phenomenal partnering with her incredible horse, Valegro left them topping the board with a score of 83.029. The British team, consisting of Michael George Eilberg, Carl Hester and Fiona Bigwood put pressure on the Dutch and German teams throughout the two days of Grand Prix competition but unfortunately it wasn’t enough to see off the Dutch rivals.

The top 30 riders from today’s Grand Prix qualify for the Grand Prix Special on Saturday.

It was amazing to win, especially in Germany, in Aachen. I don’t think anybody really expected it and for us to win, but now we have we are extra extra happy! We have a great team, our spirit is good.

I knew I’d made a couple of mistakes which is a bit disappointing but the trot at the beginning felt really good. I don’t think there are many horses that have gone in there and not made mistakes, it’s just unfortunate. I think as a team we have done well, Fiona had a great ride yesterday, Carl had a good ride today so it’s been very positive.

“Being on the podium again was great but to be honest we had another goal which was gold, third isn’t bad but being at home we really wanted gold.” She is positive looking forward to the Grand Prix Special on Saturday “Don is in a good shape and I will obviously try my best, I’ll try to get the best from him so that’s my goal.”