The 41st FEI North American Championships for Juniors and Young Riders came to a close yesterday after six hectic days of competition at Kentucky Horse Park in Lexington, USA. 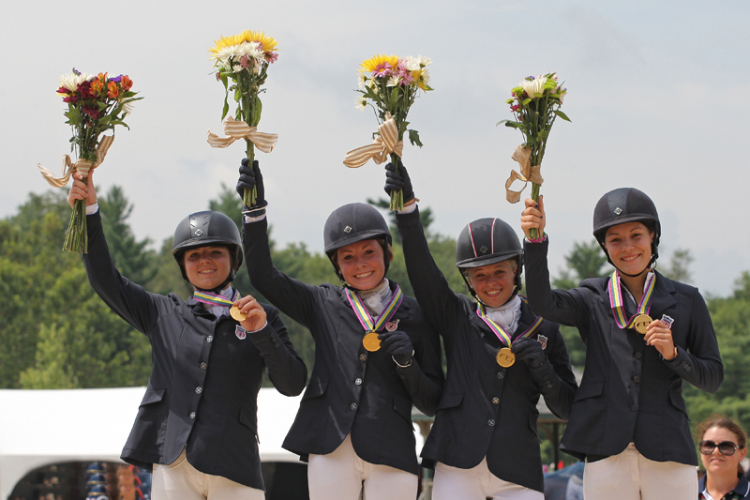 This is the only FEI Championship held annually in North America, and the 2015 fixture, open to competitors from 14 to 21 years, offered medal opportunities in the Olympic disciplines of Jumping, Dressage and Eventing along with Endurance and Para-Dressage. A total of 222 riders were entered, and Para-Dressage joined the programme of events for the very first time.

Region 7 made it a sensational back-to-back hat-trick of wins in the Young Rider Team Dressage competition. “It was super close, so kudos to the silver medal team for really giving us a run for it!” said gold-medallist Catherine Chamberlain who, together with Lindsey Brewin and Cassidy Gallman, was also a member of last year’s winning side. Samantha Jenny completed the Region 7 side that earned a total of 199.658 to pin Region 3 into silver medal spot by a narrow margin, while Canada’s Alberta/British Columbia team took the bronze.

And Chamberlain was back on the podium for the individual prize-giving, the 2014 Young Rider Individual champion this time having to settle for silver when posting 68.711 with her relatively inexperienced 10-year-old Avesto Van Weltevreden, while team silver medallist, Natalie Pai, took the gold. Pai steered Fritz San Tino to an individual test score of 69.132 to secure victory, and the 18-year-old from Wellington, Florida said afterwards, “I honestly just came here to have a lot of fun. I’m so thrilled with how it turned out.” Individual bronze went to Quebec team member Naima Moreira Laliberte who scored 68.447 with Laliberte, and this 18-year-old rider from Montreal then came out to win Freestyle gold on Saturday, posting 71.825 to a musical score that she put together herself. “I won’t lie. I only rode it once and qualified!” she said. Hannah Bauer from Virginia, USA took Freestyle silver with Trustful on a mark of 70.000 while bronze went to Kerrigan Gluch from Michigan who posted 69.050 with Vacquero HGF.

The Junior Dressage Team title went to Canada’s Ontario foursome of Vanessa Creech-Terauds, Yanina Woywitka, Georgia Wade and Alexandra Meghji whose total of 200.92 left them less than two marks ahead of the silver medallists from Region 7. Ontario’s anchor rider, Meghji, said, “we’re so lucky to be at this amazing championship at this amazing venue with all of these other girls from across North America who share the same passion for horses that we have. For all of us winning the gold medal today is just the icing on the cake!”

The top three in the Junior Individual decider all finished within less than one percent of each other, with 15-year-old Helen Claire McNulty of Region 2 posting 70.816 with Checkmate for gold. Camille Bergeron from Team British Columbia/Quebec took the silver with 70.079 riding Delfiano and bronze went to Region 9’s Chloe Taylor with Calecto V. McNulty, who finished 11th individually and fifth in the Junior Freestyle at last year’s NAJYRC, said “it’s pretty cool to come back here and win it!” And it was pretty cool for her again on Saturday when she took Freestyle silver while Bebe Davis from Florida clinched gold with a score of 71.825. Bergeron was back on the podium again too, this time taking bronze. New Freestyle champion, Davis, said “this is my last year of Juniors, I’m aging out this year. I’ve been working toward this moment for a very long time.”

Zone 4’s Brett Burlington, Louise Graves, Mackenzie McGehee and Sophie Simpson led from the outset to clinch the Junior Team Jumping title boosted by a total of five zero scores including double-clears from both Burlington and Simpson. They were already in command when carrying just the single time fault collected by Graves and Zavira at the end of round one, and when Graves’ double-error second time out was the discard they added nothing further to finish well ahead of Zones 5/9 who took silver with a final tally of 12 faults.
The silver medal team consisted of Annika Faught, Emma Wujek, Daisy Farish and Vivian Yowan and the bronze medal winning side of Mexico North included Alfonso Diaz, Carlos Hank Guerreiro, Fernanda Rodriguez de Haene and Juan Pablo Gaspar Albanez whose finishing total was 20 faults. This was a back-to-back double of bronze for Mexico.

Gold medallist, Simpson, said, “I think I can speak for all of us when I say that this has been a huge dream for us. Everything was aligned for us today, and we had a great day.”

Team silver medallist, Yowan, was out in front going into the individual medal decider on a score of 3.08 and she never faltered, completing all five tracks set by Irish course designer, Alan Wade, without a single rail down with Vornado vn den Hoendrik. On Saturday she added just a single time fault to take the title ahead of Mexico’s Juan Pablo Gaspar Albanez who showed great consistency all week. The 17-year-old rider joked “this is good, but I think next year I’m going to do Juniors again. I want to have that gold medal around my neck. The first year I was 10th, and last year I was seventh, so I’m moving up!”, he said. Bronze went to 17-year-old Sophie Simpson.

The Young Rider Team title went to Zones 3/5’s Kalvin Dobbs, Meredith Darst, Noel Fauntleroy and Jacob Pope. Carrying nine faults at the end of the first round they were trailing Zone 2, Zones 4/8 and Zone 10 who each registered an eight-fault scoreline at the halfway stage. But when Darst’s four faults with Quester de Virton was all that had to be added to their tally at the end of round two, Zones 3/5 came out on top on a final total of 13, while with eight to add Zone 2 had to settle for silver and with 12 more on their scoresheet Zones 4/8 took the bronze.

In the race for the Young Rider individual medals, 16-year-old Lucy Deslaurier threw down the gauntlet when collecting just a single time penalty on the final afternoon with her horse Hester, and that was good enough to pin Raflowitz into silver and Fauntleroy into bronze. It was desperately close between the two young ladies, only one-tenth of a point separating the pair at the end of the day but Raflowitz paying the price fro two fences down in the final round.

Deslauriers, whose famous father Mario was only three years older than his daughter is today when claiming the FEI World Cup™ Jumping title with Aramis way back in 1984, was adding Young Rider gold to the silver medal she took last year. “I really didn’t think going into this that this would be the end result” she said. “My horse jumped incredibly, he’s really a dream!”

The Junior Eventing Championship came to a dramatic conclusion yesterday with Area ll taking both team and individual gold despite a last-minute hiccup. The CH-J 1* winning side of Camilla Grover-Dodge, Morgan Booth, Amanda Beale Clement and Skyler Decker had a commanding lead going into the final Jumping phase and could afford to have five fences down and still take the title until Booth’s ride, Twizzel, was withdrawn after being held for re-inspection on Sunday morning. That changed the picture completely, giving them only a one-fence advantage as the final test got underway, but they held firm to win through ahead of Area V in silver and Area Vlll in bronze.

And Grover-Dodge led the individual rankings from the outset, steering her 19-year-old veteran, Remington, into gold medal spot when finishing on her dressage score of 38.3. Individual silver went to 15-year-old Madelynn Snoozy with Udealer while Shelby Brost and Crimson took the bronze.

Heavy rain on the eve of the cross-country phase made for wet conditions, but the course rode well. Booth can look back on her tour of the track with Twizzel, who enjoyed such a tremendous career with American star Will Coleman in his earlier years, as an experience to remember despite her later disappointment. After finishing the course Booth said she felt like she had been “riding a hurricane!…..it was probably the best cross-country ride of my life, so I was really happy!”

Skyler Decker put the emotion of the team success into perspective. She said that, following Booth’s withdrawal on Sunday morning, “we had a moment, and then we said ‘okay ladies, we have to do this for Morgan. Let’s get it together and go jump some double-clear rounds!” Both she and Grover-Dodge succeeded in doing just that, and with just one mistake from Clement their final score of 148.0 was good enough to clinch it. Area V’s silver medal winning score was 157.4, posted by Margaret Stocker, Caroline Testi, Olivia Alland and Barrett Phillips. Bronze medallists Jackie Lemastus, Emily Hagan, Mary Peabody and Hope Walden from Area Vlll posted 161.9. Grover-Dodge said “I’m so excited. I was just so happy for everyone. Everyone worked so hard, so it’s just the best feeling.”

In the Young Riders CCIYR 2*, Area lll’s Diane Portwood and Cinerescent claimed the top step of the podium ahead of silver medallist Area lll’s Nicole Doolittle with Tops in silver and Area Vlll’s Paige Pence with Class Action in bronze. “I’m so happy with Leila (Cinerescent)”, said Portwood. “I’m super happy with her cross-country, that’s both our best phase. She’s a fantastic cross-country horse.”

Yesterday’s presentation of the Para-Dressage Individual Freestyle medals marked the end of a successful debut for this discipline at these Championships. It all kicked off with Team gold going to USA’s Kate Shoemaker (Grade lll), Cambry Kaylor (Grade 1b) and Sydney Collier (Grade 1b), while Canada’s Nel Godin-Keating (Grade 1a), Sarah Cummings (Grade ll) and Madison Lawson (Grade lV) claimed the silver.

Collier is a sports personality in her own right, and winner of the FEI’s Against All Odds Award at last year’s FEI General Assembly in Azerbaijan. The 17-year-old, who has the Paralympic Games at Rio 2016 clearly in her sights, steered her trusty 12-year-old Hannoverian, Wentworth to also collect Grade 1b gold ahead of silver medallist Kaylor, but the tables were turned when it came to the Freestyle – team-mate Kaylor coming out on top with Markgard Donnewind with a strong score of 70.750 against Collier’s 66.100 in silver medal spot.

Speaking after her team’s victory, Collier said, “it’s such an honour to be here as a team, and I’m so impressed with my team-mates and incredibly happy with our horses!”

A field of 14 competed in the Endurance Championship including one Canadian and three US teams. And the USA Southeast selection of Mallory Capps, Mary Kathryn Clark, Kelsey Russell, Annie Whelan and Katie Baldino dominated the podium when taking both team and individual gold, while USA Northeast claimed team silver.

Team medals were determined by the top three highest-placed combinations and USA Southeast finished best with a cumulative time of 19:35:15 while USA Northeast registered 20:30:41. The silver medal team consisted of Hanna Weightman, India Orino, Maria Muzzio and Hunter Green. The course designed by Emmett Ross drew plenty of compliments from the competitors and 11 of the 14 starters completed.

USA Southeast’s Kelsey Russell topped the individual podium after another great ride with My Wild Irish Gold who also helped her take the 2011 individual title. The mare is about to be retired and Russell said with emotion, “I won my first ride on her, and she took me to two world championships. It’s a bond I don’t think anyone will ever take away.” The pair’s winning time was 5:43:56, while Hanna Weightman and Syrocco Rabia took individual silver in 5:46:07 and bronze went to Hope Misner with Sweete Legacy who stopped the clock on 5:52:03.