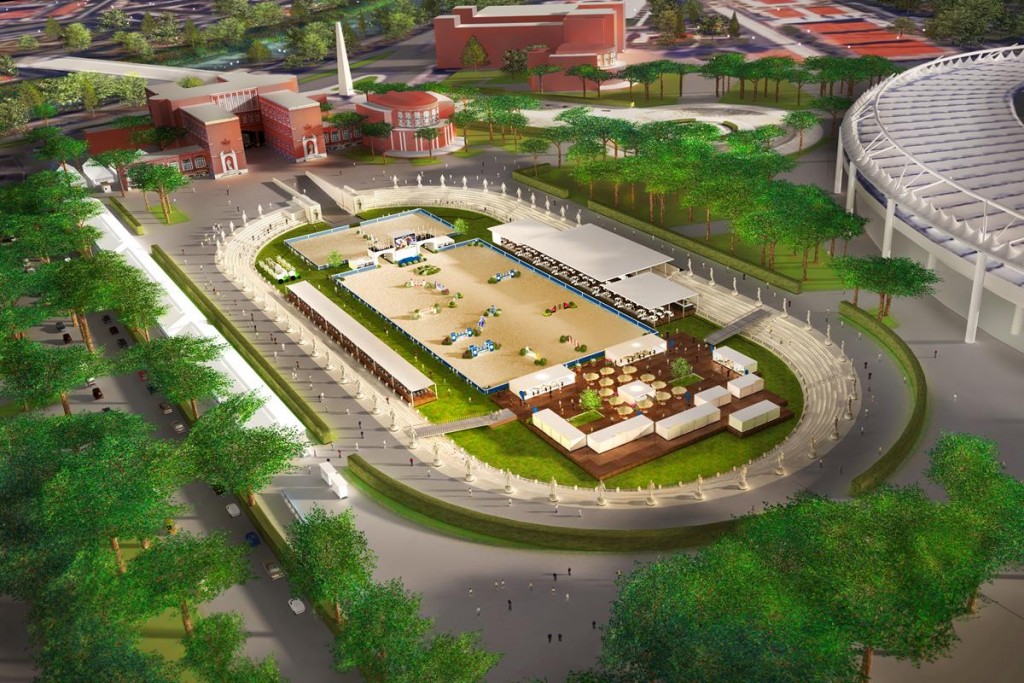 Ludger Beerbaum (GER), Rolf-Göran Bengtsson (SWE), Simon Delestre (FRA), Edwina Tops-Alexander (AUS) and John Whitaker (GBR) are just a few of the top show jumping names who will be battling it out in Rome for the 13th leg of the Longines Global Champions Tour.

Today the Longines Global Champions Tour can exclusively reveal the stunning new graphic showcasing the layout for the Rome venue as the countdown is underway for the most anticipated show jumping event in Italy. In just over three weeks, from Friday 11th until Sunday 13th September, the impressive Stadio dei Marmi in Rome will host the Italian leg of the Longines Global Champions Tour, an exciting new addition to the 2015 championship circuit. Entrance to the show will be free for the public, and it will be a chance for local and international fans to get up close to many of the best riders in the world, and witness the masters of the sport in action in the stunning venue. With a shopping village, refreshments, a close up view of the warm up arena and covered seats close to the action, there will be something for everyone during this three day event.

Ringed by 59 classical statues depicting different sports, the arena will be nestled in the heart of the Stadio dei Marmi which can be translated as the “Stadium of the Marbles”. Originally designed in the 1920’s, the stadium is one of the arenas in the Foro Italico sports area, and home to the Italian Olympic Committee (Comitato Olimpico Nazionale Italiano, CONI).

The Longines Global Champions Tour of Valkenswaard saw an intense round of competition as the 2015 Championship race gallops to an exciting finale. With the points gap close between rider rankings, there’s everything to play for with each leg of the Tour now playing a crucial role in the final event.

Friday night in Valkenswaard saw the world’s top riders teaming up for the first time ever in a spectacular 1.55m / 1.60m Team Competition under floodlights which was won by the dream team of Rolf-Göran Bengtsson and Harrie Smolders. It was a stunning precursor to the launch of the exciting new show jumping format of Global Champions League team competitions in 2016 where 2 top riders from different countries will be paired together.

In Rome the Longines Global Champions Tour Grand Prix will take place on Saturday at 12:30 local time, and will see the world’s best riders take centre stage as they battle it out for a share of €300,000. Throughout the three days there will be a whole host of competitions, for both amateur riders and the stars of the sport.

The importance for Rome of hosting the Longines Global Champions Tour and being part of the circuit’s prestigious international calendar is significant. Beautiful, inspirational Rome has been attracting visitors for over two millennia and continues to be one of the most exhilarating destinations in the world. One of the oldest continuously occupied cities in Europe, Rome’s historic heart contains iconic monuments and artistic masterpieces from the magnificent Colosseum and the Pantheon to the Sistine Chapel and the ruins of the Roman Forum. Visitors can take in Renaissance palazzos and Baroque fountains or simply stroll through beautiful piazzas and soak up the vibrancy of the city of La Dolce Vita.

The best riders in the world, including top Italian riders, will be competing in front of a passionate local and international crowd as the battle for the series championship reaches a crucial stage with competitors locked in a gladiatorial battle for the honours. ​