A breathtaking Shanghai Longines Global Champions Tour Grand Prix jump off had fans on the edge of their seats as Abdullah Al Sharbatly (KSA) and Tobalio emerged victorious ahead of Marco Kutscher (GER) and Van Gogh, and Marc Houtzager (NED) with Sterrehof’s Calimero.

After the showcase competition it was revealed that Longines Global Champions Tour and partner Juss Event have signed a long-term agreement for the future of the event in Shanghai, which has become a dynamic fixture on the circuit’s international calendar. The unique 5* event in China was part of a strategic expansion by the Tour into Asia and has quickly become a hot favourite with spectators who queued early today to ensure their seats for the Grand Prix. The announcement of the new agreement marks a definitive commitment to the progress of the sport in Asia in future years.

2016 marked the third year of the Shanghai LGCT. Thousands packed the grandstands and filled the chic shopping village as families flocked to enjoy the show jumping spectacle and world class entertainment. Autograph sessions, meet and greets and photo opportunities with riders were a hit with the audience. VIP guests made the social scene sizzle sporting “Ascot Ladies Day” outfits and hats. Model Lin Chi-ling created a stir in a striking black dress as she watched from the VIP where Longines President Walter von Känel joined guests.

The result of the $485,000 Grand Prix dramatically extended Christian Ahlmann’s ranking lead to 129 points, with Emanuele Gaudiano (ITA) leaping up to second in 96 points, and John Whitaker (GBR) in third on 85 points. 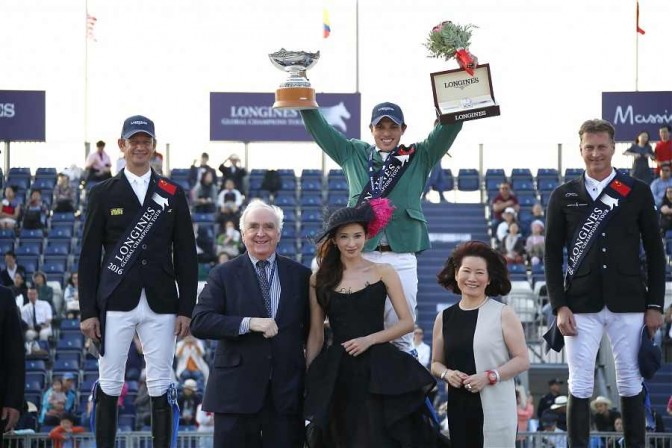 The 1.60m Grand Prix saw a few big names return to the arena for the first time this season, with Ludger Beerbaum’s prolific stallion Chaman in action and Marco Kutscher’s (GER) Van Gogh back in the show ring for the first time after a long break. Maikel van der Vleuten’s (NED) top horse VDL Groep Verdi TN N.O.P. was one of the headliners, as was Christian Ahlmann’s eye-catching stallion Colorit, both of whom looked on fantastic form throughout the Grand Prix.

The world’s top three riders were among the starters for the 2016 Shanghai LGCT Grand Prix. Uliano Vezzani’s course demanded horse and rider use delicacy and power with full height verticals, intimidating oxers and a spook-inducing liverpool fence which caught out a few combinations. It was Switzerland’s Pius Schwizer and his nine year old bay gelding Tarioso Manciais who lead the way after a captivating first round performance.

Hot on his heels was World Number 1 Simon Delestre (FRA) with Chesall, and Olivier Philippaerts (BEL) with H&M Legend of Love, who put in an impressive performance to finish round one at the sharp end of the grid. A total of 13 riders went clear, with notable names such as Ludger Beerbaum (GER) and Chaman, Scott Brash (GBR) and Hello Forever, LGCT Ranking Leader Christian Ahlmann (GER) with Colorit, Edwina Tops-Alexander (AUS) with Caretina de Joter, Sheikh Ali Bin Khalid Al Thani (QAT) with Vienna Olympic, and Rodrigo Pessoa (BRA) with Ferro Chin v. Lindenhof leading the way into the next round of competition.

Round two saw a longer course, making full use of the arena, and requiring plenty of energy left in the tank. Michael Whitaker (GBR) and Viking picked up an unlucky four faults after clipping a fence towards the end of the course, and compatriot Scott Brash (GBR) had an unusual refusal with Hello Forever at the combination. Maikel van der Vleuten and VDL Groep Verdi TN N.O.P, Olivier Philippaerts (BEL) with H&M Legend Of Love, Emanuele Gaudiano (ITA) with Caspar 232 and Simon Delestre (FRA) all picked up four faults putting them out of contention.

The jump-off saw five riders line up to take their shot at the title. First to go was LGCT Grand Prix of Miami Beach winner Edwina Tops-Alexander (AUS) who looked on phenomenal form with Caretina de Joter. Edwina rode a class round across the galloping course, setting the pace at 43.45s as the time to beat. Next up was Marc Houtzager (NED) with Sterrehof’s Calimero – a bigger striding horse with paces that ate up the distances – and the pair pipped Edwina’s time to cross the finish in 43.26s, just tenths of a second ahead.

The crowd were now on the edge of their seats as Marco Kutscher (GER) with the beautiful dark bay stallion Van Gogh entered the arena. Right from the outset the pair set off at speed shaving every corner possible, Marco and Van Gogh flew to the last stopping the clock in 42.27s – just shy of a full second ahead of the previous two riders. Watching intently was LGCT Ranking leader Christian Ahlmann with his stunning stallion Colorit. Careful, powerful and fast, horse and rider galloped through the course, with Christian taking out strides and guiding Colorit beautifully around the circuit, maximising shortcuts and showcasing a foot-perfect round. The crowd were on their feet as they approached the final fence ahead on time. But it was not to be. The crowd groaned as Christian collected four faults despite his impressive time of 40.68s.

Last to go were the combination of Abdullah Al Sharbatly (KSA) and Tobalio, who knew they had Marco Kutscher (GER) and Van Gogh to beat. Abdullah and Tobalio set off at a blinding pace. They raced to the last, and with a stag-like leap cleared the final fence and crossed the finish line in 41.97s as the crowd erupted in cheers.

The Tour now returns to Europe and to Hamburg for the fifth round of action as the 2016 championship picks up pace.

Jan Tops, Longines Global Champions Tour Founder and President: “We started with a show here three years ago, and every year it gets better and better. The riders know that, and have the same feeling, even if it’s a long way [from Europe]. The horses travelled amazingly, the footing and facilities are as good as any in Europe, and I’m very proud of what the Chinese are doing. The Government and Juss Events are great partners, and that reflects the sport. Today we saw how well the horses jumped – we had five in the jump-off and it was a great [Grand Prix].”

Abdullah Al Sharbatly, Gold Medallist: “I would like to thank all the organisers, especially Jan Tops, and the sponsor Longines for this great Global Champions Tour. I’m really happy to be in this great event with a great crowd – the atmosphere is unbelievable. I’m happy today to win – last year I had the last fence down in the Grand Prix and was unlucky, but this year was a great win. I would also like to thank my colleagues in second, third and fourth place – they were all amazing, and did a very good job. Tobalio is my best horse – he is amazing.”

Marco Kutscher, Silver Medallist: “I would like to say thank you to the organising committee and the sponsor Longines – they did a great job and it’s always a pleasure to be here in Shanghai. I’m very satisfied, especially with Van Gogh as it was his first Grand Prix after Hong Kong. He had a break of two and a half months breeding, and he came back just one day before departure. I’m really satisfied with the way he jumped, and I’m happy to be second in this class.”

Marc Houtzager, Bronze Medallist: “Calimero is only nine years old and it was his first serious Grand Prix at CSI5* level. When you have a good horse, it makes riding a little easier! I think Uliano did a fantastic job with the course and I’m really happy with my result.”

Christian Ahlmann, LGCT Ranking Leader: “It’s a very good start [to the season]. In all of the classes [we finished] in the top eight, and have three times jumped double clear. Colorit did a very good job today – at the end we had one down at the last fence, otherwise we could have won this big Grand Prix. In the overall ranking I’m still leading, and it looks quite promising, so I hope I can keep this shape and I’m looking forward to the other shows.”

All Photos by : Steffano Grasso/ LGCT