The current world number one Scott Brash threw down the gauntlet in Cannes with a dramatic win in the big class of the first day, three seconds ahead of his nearest rival. It was a blistering start to the first day on the French Riviera which unfolded under idyllic blue skies. As the sun went down, the lights came on for the second of the CSI5*, the 1.50m Prix FFE French Tour Generali, which saw Ben Maher (GBR) take an early lead with his eleven year old gelding Aristo Z. He was soon overtaken by fellow British rider, John Whitaker (GBR) with his beautiful dark bay stallion Argento after they completed a strong clear round in 64.62s. However, both were beaten by their compatriot Scott Brash who delivered an effortlessly smooth and quick round with eleven year mare old Hello Annie, owned by Lady Pauline Kirkham and Lady Pauline Harris. Scott took the win a clear three seconds faster than second place man Julien Epaillard (FRA) with his chestnut stallion Sheriff de la Nutria LM. 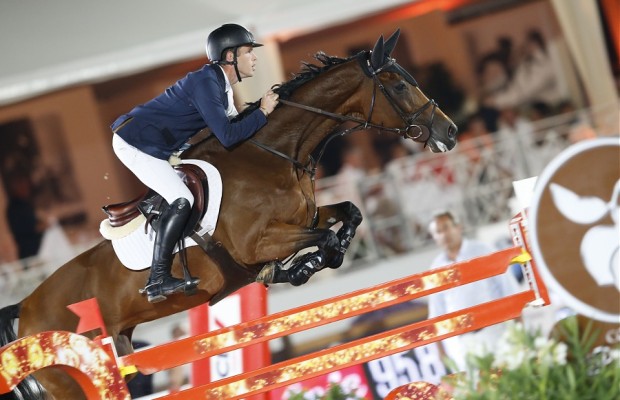 Speaking about his win, Scott said: “It’s started great to Cannes and I’m really happy as Hello Annie was fantastic here tonight. She’s a really useful horse, she jumps the big classes for the first couple of days and these sorts of horses are really useful to have in your string to keep your rankings points up. It’s great to see the Brits do well – John rode a great round, as did Ben also – his horse has been off for a while so it’s good to see him back, and this result is very good for Britain. I’ll ride Hello M’Lady for the Grand Prix – I jumped her earlier today and every day this week, so fingers crossed for Saturday.”