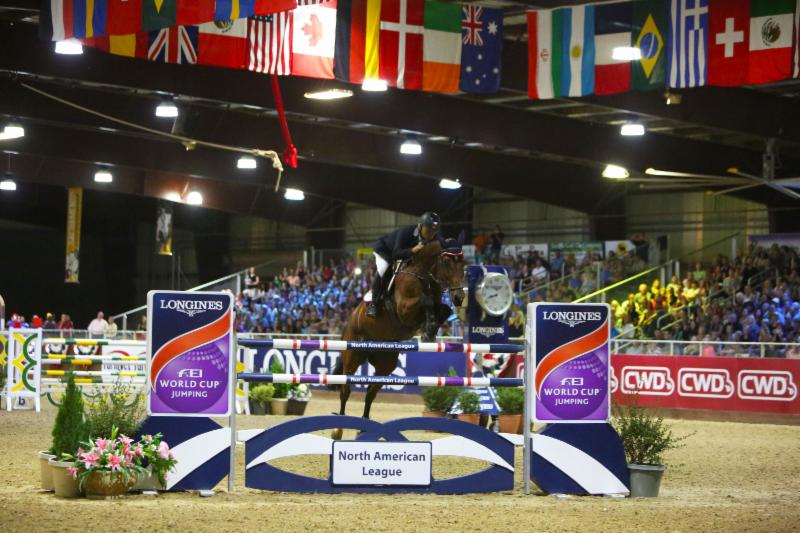 Congratulations! Parot of Chile, aboard 12-year-old bay gelding Atlantis, bested a field of 24 riders with a blistering jump-off at Rancho Murieta Equestrian Center on Saturday night!

A sell-out crowd packed the stands and VIP Lounge at Rancho Murieta’s Indoor Arena, set with Alan Wade’s challenging 1.60m course consisting of a total of 13 jumping efforts with a double combination at 5ab and a triple at 7abc. Wade’s course presented technical questions and imposing elements that demanded intelligence, scope and split-second timing from horses and riders alike. Twenty-four riders representing seven countries competed, vying for a chance to continue on to compete in the World Cup Finals.

“We are ecstatic for the fantastic turn out for the Longines FEI World Cup™ Jumping Sacramento Presented by Lasher’s Elk Grove Dodge Chrysler Jeep Ram,” said Dale Harvey of West Palms Events. “This is Sacramento International’s eighth year and, without question, the best event yet! We had a phenomenal line up of riders and we could not have asked for a better, or more packed stadium for the show! Thank you to all our sponsors and the spectators that came out for this incredible show-jumping event, we could not do it without all your support!”

Tricky sections of the course included a number of challenging turns, 7abc’s triple combination, and a turn to the final Longines jump requiring horses to gallop past the gate. Jumps and turns come up extremely fast in Rancho Murieta’s Indoor, requiring riders to plan their tracks carefully and think ahead.

Ultimately, six riders successfully navigated Wade’s trying and imposing course, paving the way for a thrilling jump-off that had spectators alternately groaning, gasping and cheering for their favorites!

First in the order for round one, Rich Fellers of Wilsonville, OR, riding the indomitable Flexible, elicited a huge roar of appreciation from the crowd as he entered the ring. Fellers and Flexible were the returning champions from Sacramento International’s 2014 competition! Fellers unfortunately had 8 faults and it was the fourth round in which Alec Lawler and Agamemnon had the first clear go. Five more clear rounds followed, including Quentin Judge aboard HH Copin Van de Broy, Eric Navet on JonkheerZ, the Master of Faster Richard Spooner and Chivas Z, Karl Cook and Tembla and Samuel Parot on Atlantis.

A number of riders pulled rails and suffered time faults in round one, which made the jump off an impressive accomplishment!

The jump-off saw a shortened course with 7 jumping efforts, requiring an abrupt turn to fence 3 and a long gallop to the last fence on course. Chile’s Samuel Parot and Atlantis laid down a blistering track, leaving the fences intact in a time of 36.97. Quentin Judge of the United States and his mount HH Copin van de Broy earned second with a time of 37.55 and third place went to France’s Eric Navet, aboard Jonkheer Z, going clear in a time of 38.65. Richard Spooner and Chivas Z had the crowd gasping as he galloped all out toward the last fence, but too much speed carried him through rather than over. Richard stayed on, earning 6th place. Fourth place went to Alec Lawler and Agamemnon, and Karl Cook’s unfortunate rail at the last element earned him 5th.

During a press conference after the Grand Prix, the top three riders were able to comment on their rides and experience in Sacramento. When asked about his ride, Samuel Parot said Atlantis was, “very careful and fast, jumped super.” He added, “I am very happy, and I love California.” Samuel was coming off an earlier Sacramento International victory, having won the $35,000 Welcome Grand Prix earlier in the week. Second place winner Quentin Judge praised HH Copin van de Broy as a “seasoned, fantastic horse I can rely on,” and said, “this was a great venue for him and a great test.” Third place finisher Eric Navet said of Jonkheer Z, “I am very lucky to have this horse to show,” and added, “It is a great pleasure to come for the Grand Prix and the venue is full and the public is very enthusiastic, that helps the rider. This is a great, great venue.” Course designer Alan Wade commented, “the bigger we got, the more fair and open the distances were. I was trying to be fair to everyone.”