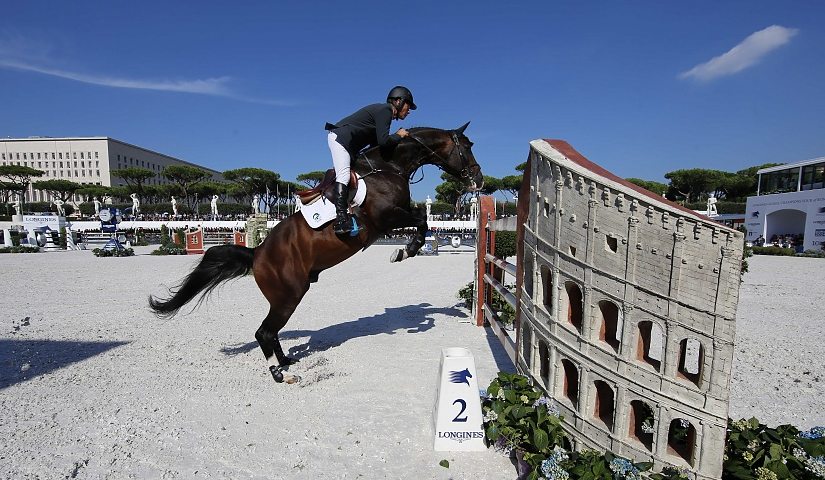 Next to Rome’s Olympic Stadium and in a unique arena surrounded by classical marble statues, the gladiators of show jumping thrilled thousands of fans who lined the natural amphitheatre to cheer on the world’s top riders.

German champion Marcus described the venue as “unbelievable” for show jumping and images of the location were beamed around the world to fans of the sport online and on TV.

Today’s result means that three top riders are now locked in a fierce battle at the final two events of the season for the overall championship. Current ranking leader Scott Brash is only 11 points ahead of Luciana and she in turn is only three points ahead of Rolf. As the final stages of the 2015 championship unfold, only the best eight scores of the leading riders will count to the final total. And a fascinating contest is opening up between Christian Ahlmann of Germany of 234 points and Simon Delestre of France on 229 points.

Passionate fans lined the arena throughout the day to see top-level sport in the capital city as Longines Global Champions Tour continues to bring the sport to new audiences around the world. City dignitaries and officials from the Italian National Olympic Committee hailed the first edition of the Tour in Rome as a huge success in the week Rome bid to host the 2024 Olympic Games. It was standing room only as fans packed the grandstands to catch a glimpse of the top riders in the world. Those who arrived early were treated to a spectacular view of the highly sophisticated purpose-built sand arena, as 50 combinations from 23 different countries took to the course designed by Uliano Vezzani (ITA).

The first round saw many of the early contenders fall short of the challenge set by Uliano, as the tricky but fair course tested the best combinations in the world. The challenge lay with keeping the horses switched on to the last fence, with a formidable layout of the final three fences on the home run. With the course set at the full 1,60m throughout, the first part of the double at fence five caught out a few Grand Prix title hopefuls. However a total of 20 riders sailed through clear, with combinations such as Ludger Beerbaum (GER) and Chiara 222, Constant Van Paesschen (BEL) and Citizenguard Taalex, Audrey Coulter (USA)with Capital Colnardo and Maikel van der Vleuten (NED) and VDL Groep Verdi Tn N.O.P. raising the bar of the competition.

The second round showcased a straightforward but big course, with Uliano Vezzani utilising the full length of the arena to encourage a fast pace. Calculated at 370 meters a minute, the time allowed was 71 seconds in total which proved costly to Christian Ahlmann (GER) and Epleaser van’t Heike who jumped clear but uncharacteristically picked up one time fault. It was a dramatic second round which saw a couple of riders have the first fence down, including last LGCT Grand Prix winner Marco Kutscher (GER). The second round also featured a different treble combination, including a full height vertical and a challenging fence immediately off the corner with a tight turn before an option of two gates.

Riders such as José Maria Larocca (ARG), Kamal Abdullah Bahamdan (KSA), Jur Vrieling (NED) and Lauren Hough were unable to jump clear into the final round and the temperature rose as a total of six went through to the jump off.

The bar was set, and Mexico’s Alberto Michán Halbinger was the first to jump with his bay stallion Camilo LS La Silla, setting the pace at 39.24s but had an unlucky fence down. Denis Lynch (IRL) and the expressive All Star 5 followed suit with four faults despite a better tine of 39.06s. Luciana Diniz (POR) and Fit For Fun 13 completed a stunning clear round, the first of the clears and set the pace at 38.00s exactly. Rolf-Göran Bengtsson (SWE) was next in and rode a masterful clear round with Casall ASK and lighting up the time sheets to the cheers of the crowd as he crossed the finish in 37.87s. The galloping track suited Pénélope Leprevost with her bay 10 year old stallion Vagabond de la Pomme, but she was unable to better the time, and went clear in 39.02s, finishing in 4th place. All eyes were on supreme talent Marcus Ehning (GER) and Comme il faut as he was the last to go, and the crowd and VIP guests were on the edge of their seat as he came home in 38.32s, just fractions away from Luciana.

It was another win for Rolf-Göran Bengtsson (SWE) who has had a formidable season with his second Grand Prix title of 2015 with Casall ASK. The Tour now moves to Vienna for the penultimate Grand Prix of the year.

Jan Tops, President and Founder of Longines Global Champions Tour: “This is one of those events where it is difficult to describe how beautiful it is. The setting is unique, it is iconic and beautiful and our team did an amazing job for the horses with the facilities and not to forget the crowd, I did not expect to get such a crowd for our first year, they acknowledged and really cheered on everyone.

“I want to thank Vittorio [Orlandi] for his belief that we could be here. To get the chance to be here and for the Global Champions Tour to be in this iconic place, thank you very much. I would also like to thank the Italian Federation who have been very supportive to us being here especially Vittorio, he has been a horseman for many years, I know him as a long time friend, and he has been very supportive to have us here in this amazing place.

“Also, he’s one of the biggest artists of the show, the course builder Uliano, we have had incredible sport again with the right numbers in the jump off, good for the horses, good riders are now on the podium, it’s an incredible package of riders with us here again and you can only do that if you have a very good course builder.

“After this weekend it is getting more and more exciting, Rolf is here again and the Championships are getting so close. Scott is still in the lead but right on his tail is Luciana and Rolf and they still have a chance to win so it will be very very tight for the final in Doha.”

Vittorio Orlandi, President of FISE (Italian Equestrian Federation): “I really would like to thank Jan Tops for having brought here this wonderful wonderful show. It is helped by the beauty of the town and the beauty of the surroundings. I am really really proud because many of the people involved with the technical organisation of the Global Champions Tour are Italian, starting from Marco Danese, the sporting director, Uliano the course designer, and many other people, it makes me very proud to be Italian.

“I feel like the father of all Italian riders and just like a father, I would like to say thank you in the name of everyone for giving us the chance to host the Longines Global Champions Tour here in Rome – thank you, thank you Jan Tops.”

Elisa Gasparini, Brand Manager for Longines Italy: “We are very pleased and honoured to be here and sponsor of this great event in Rome, we are very happy and we have a great success, it’s just fantastic so thank you very much to the organisation.”

Rolf-Goran Bengtsson, winner of the Longines Global Champions Tour Grand Prix of Rome: “I would like to thank everybody. It’s a fantastic show, with a great atmosphere. There is a fantastic crowd for the first year. Everything is really nice and being able to win here with my horse Casall ASK on top of all of it is amazing. Casall ASK is a fantastic horse, year after year, always providing clear rounds like today in Rome. I really want to thank my sponsors, the owner of the horse and of course the whole team who support me.”

Luciana Diniz, second place: “I love Rome, I love the show, it’s so beautiful, congratulations to all of you. I want to thank my team as well. They make it possible to do such a great season. I feel like a winner today and I want to dedicate this victory to my children and my ex-husband. I thank all of you for this beautiful show.”

Marcus Ehning, third place: “For the first time (staging the LGCT in Rome) it is really unbelievable. I’m having a great time. I think for me it’s one of the best Longines Global Champions Tour stages I have had so far. My horse is nearly the same as the show: he is unbelievable. He has improved again and again over the past year. He is just ten years old so he doesn’t have the top experience for that level but we have good results and I’m extremely happy with him.”