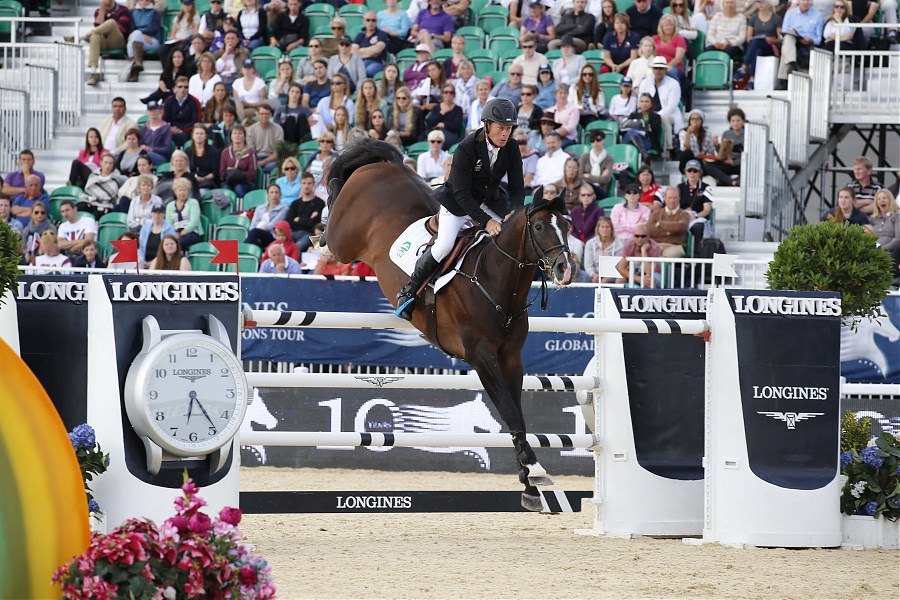 A 12-rider jump off topped off a dramatic finale as Rolf-Göran Bengtsson clinched victory in the Longines Global Champions Tour Grand Prix presented by Qatar with his formidable stallion Casall Ask.

The third edition of the Tour in London was a feast of intensity and exceptional sporting action delivering split second drama for the 11th leg of the championship race with World No1 Scott Brash now at the top of the overall series ranking.

Rolf-Göran Bengtsson (SWE) took his first win of the season with the ever-consistent Casall Ask, racing against the clock to come home in 34.91seconds. The calibre of riders was so high and the final round so intense, that John Whitaker (GBR) came just 8 hundredths of a second off the winning time, with his stallion Argento spurred home by the cheers of the local crowd. France’s Simon Delestre rode his beautiful black stallion Qlassic Bois Margot to third around the big, technical course which featured some of the 2012 London Olympic fences including No10 Downing Street and the Post Office.

It was a quintessentially British event in a glorious country setting on the edge of London, in the beautiful Syon Park. The Grand Prix took place under blue skies with spectators and guests enjoying a stunning afternoon of world class sport in the fantastic Capability Brown landscaped grounds of Syon House.

Uliano Vezzani’s first round course was tough and challenging for the world’s top combinations, with the fences set at the full 1,60m height. 45 starters from 19 different countries took on the course, which was designed to test the very best horse and rider combinations in the world as they rode for their share of the 400,000 euro prize. The steep Greenwich fence, which was set as the first part of a double caused many of the issues, with a difficult line causing many to clip the pole.

18 top combinations went through to round two, with twelve riders going clear and six through on four faults. Greece’s Athina Onassis de Miranda, Sheikh Ali Bin Khalid Al Thani (QAT), Robert Whitaker (GBR), Pénélope Leprevost (FRA) were some of the top names to go through, including Mexico’s Jaime Azcarraga who made his Longines Global Champions Tour Grand Prix debut in style with his horse Anton.

The second round caused relatively few problems, with sixteen out of the eighteen going clear, as riders took on the smooth flowing course where the time wasn’t an issue. The jump-off saw some of the fences go up to a testing 1,65m, which meant the race to the finish line had to be more carefully calculated. With tricky lines and angles throughout, those who had the pace also needed the scope and agility to tackle the twisting course.

First to ride triple clear was Rolf-Göran Bengtsson who set the time to beat at 34.91seconds. The Netherlands Gerco Schröder was next to ride clear, with his grey 12 year old gelding Glock’s Cognac Champblanc putting in a careful round, knowing he would be unable to beat the pace. Simon Delestre (FRA) upped the anti, but was unable to beat Rolf-Göran’s excellent time, and despite galloping flat out between fences came home in 35.63seconds. Britain’s John Whitaker was next to go and looked incredibly strong with his famous stallion Argento fired up and responding to the crowd who were in full support of one of their star riders. At the last he looked almost identical on time, however fell just eight hundredths of a second short to finish in second place.

The final rider, Britain’s Scott Brash, looked in contention to the last, and was within the time and the crowd held their breath as he took a tight turn with his famous gelding Hello Sanctos. However he clipped the final fence to the groan of the crowd, finishing in sixth place. Despite his obvious disappointment, he gained 31 valuable points in the championship race, pushing him ahead of former leader Luciana Diniz (POR) by 28 points.

The Championship Ranking Top 3 now sees world number one Scott Brash take the lead as we look to Round 12 in Valkenswaard, where the new Tops International Arena will host many of the best riders in the world. Luciana Diniz (POR) is now second and will be doing everything to regain her lead, and Germany’s Christian Ahlmann maintains his third place. As we turn to the heart of the Longines Global Champions Tour, the battle is set to continue as the fight for the final few Grand Prix titles rockets up a gear.

Juan Carlos Capelli – Vice President and Head of international Marekting Longines: “It is always a pleasure to be here in London because the public know show jumping very well. I would like to congratulate the winners, it was a fantastic jump-off, what a show, it was an incredible moment. Also I would like to congratulate the organiser, who did an incredible job, it is very well done, and also the course designer who did a great job with 12 through to the jump-off and Scott to be both number 1in the ranking of the FEI and also the Global Champions Tour, congratulations.

Jan Tops – President and Founder of the Longines Global Champions Tour: “This is always an exciting leg, you could see with 12 in the jump-off it was very fast, difficult to win. Rolf is in incredible form with six places at the moment he is in 4th place. I think he could be a challenge to Luciana and Scott, he is coming from behind. I also want to thank our partners Longines and Qatar for making this great event possible. We are very happy with the first time here at Syon Park. Now Scott takes a good lead, we have seven or eight up with the pace, the only one with six placing is Rolf, that’s why I think he can be a threat for both of them. For the horses and the riders the location is very good logistics wise – they have a lot of space, great footing, good stables and a lot of space.”

Scott Brash – Longines Global Champions Tour ranking leader: “It’s good, I’m pleased to be top at this stage. I’ll do all the other venues apart from Rome so I’ve got a couple of extra chances. We’ve got to keep going, Rolf is going really well so we’ll keep trying.”

Rolf-Göran Bengtsson – Longines Global Champions Tour Grand Prix of London presented by Qatar winner: “My horse has proved that he is in good form. He jumped six times this season and every six time he was in the second round, so I can not be more than very happy with him. It’s a pleasure for me to win here in London, I will try my best for the rest of the championship but as Jan said, I have still one more score to count. Scott is far away with 3 wins this season so far, so it’s going to be hard to bit him. When there is a jump-off, you know that you have to be very quick, so I did my best but I knew that Scott and Hello Sanctos were able to go very quickly. John was very very close, Scott was super fast but Casall ASK and me were very lucky today. The horses are jumping fantastic here. For the horses it’s good, for the riders it’s good here, we have good footing, very good course designer, we cannot wish for much more from our point of view.”

John Whitaker – Longines Global Champions Tour Grand Prix of London presented by Qatar second place: “Argento is on very good form and I think I’m on quite good form! It’s good, I’m enjoying it, my horse jumped great today, I just couldn’t catch Rolf, he was too quick. I wasn’t far away, I think my second last fence I was a bit untidy there, I could have done one less stride, but he was a little bit excited by that point and even going through the finish I I’d have turned right I would have saved those few hundredths. But I can’t complain, my horse jumped super and it’s nice to win but I’m happy with where I’ve come.”

Simon Delestre – Longines Global Champion Tour Grand Prix of London presented by Qatar third place: “Qlassic Bois Margot was super today; it was a super round. It’s always difficult when 12 riders are in the jump-off but I am really happy.”