It was Sweden’s Rolf – Goran Bengtsson and Casall ASK who proved to be unbeatable in yesterday’s 1m60 CSI5* Grand Prix in the back-yard of Jan Tops’ Stables in Valkenswaard. Pulling off a brilliant triple-clear round performance, Bengtsson & the 17-years young Casall ASK added one of many LGCT victories to their name as well as the second victory this season to sit very quietly behind the overall rankings’ leader Edwina – Tops Alexander.

Eleven combinations went clear out of 49 in the first round which was a lot owing to the fact that the course – builder asked some tricky, difficult questions such as the mega wide oxer at number 7, the treble – combination, the last line to the fragile bicycle which had to be approached carefully.

The second round was also a bit dramatic at the treble combination, Belgium’s Olivier Philippaerts struggled to come out and henceforth retired right after. Laura Renwick who was riding on zero faults from the first round faced a shocking disappointment when her horse Bintang II pulled on the brakes twice – which is very unusual for him – and was immiediately eliminated. 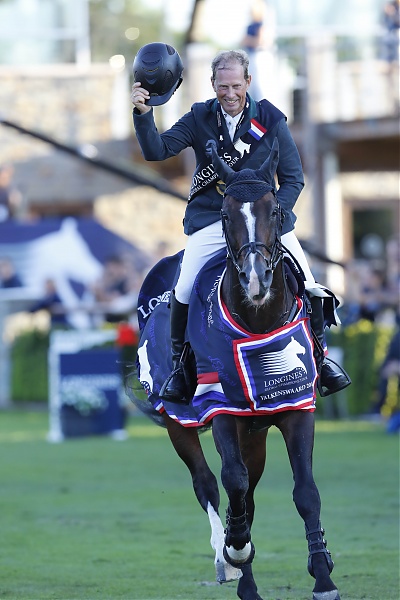 Four-faulters like Harrie Smolders & Don VHP Z, Marco Kutscher & Van Gogh, and Denis Lynch with All Star came back to the second round to leave all the rails up and settle for 10th, 9th and 8th place respectively.

Six riders were double clear for the jump-off such as Rankings’ leader Edwina – Tops Alexander and the cat-like Caretina De Joter who had an unfortunate rail in the barrage in a time of 43.02 seconds to settle for 6th place but still holds onto the LGCT arm-band. Lauren Hough & Ohlala are known to be extremely fast against the clock but touching a pole to the ground cost them to drop down from 3rd place to 5th and a difference of 28,000 euros. In fourth place was Jessica Springsteen and the well-jumping scopey Cynar V, beaten by her colleague also riding at Stal Tops was Alberto Zorzi and Fair Light Van’t Heike who impressed the crowds with his fighting spirit at home-base. Laura Kraut and Vingino’s 9-year old grey mare Cavalia were in cracking form and were just about an inch close to victory when Rolf – Goran Bengtsson went all-in with their experience and knowledge to snatch the victory from Kraut and pocket the 100,000 euro grand cheque for the second time this season.