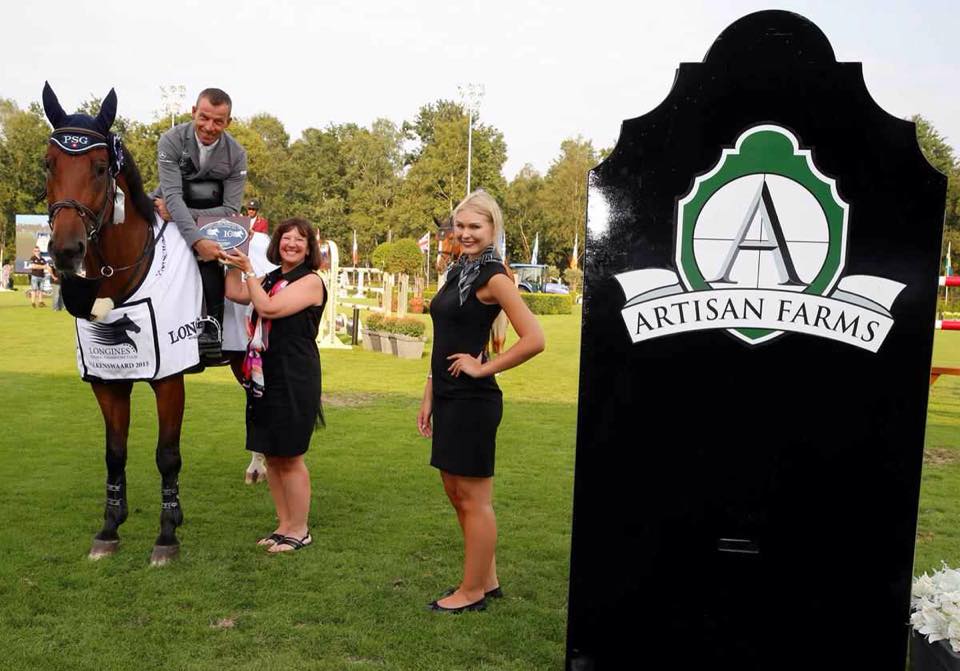 Switzerland’s Pius Schwizer took the CSI5* Artisan Farm Prix trophy in the 1,50m / 1,55m feature class of the first day for the 12th leg of the Longines Global Champions Tour with PSG Junior. Sheikh Ali Bin Khalid Al Thani (QAT) rode a stunning double clear in 38.25 with First Devision at the new Tops International Arena where he is based, and hot on his heels was Christian Ahlmann (GER) who took third place with his eye-catching stallion, Colorit, finishing in 38.37s.

In the perfect grass arena, many of the world’s best horses and riders went up against a testing but fair course from designer Uliano Vezzani. Beautiful new fences made their debut for the first time as the initial round took the competitors on a sweeping tour of the vast ring. From between the main grass arena and sand ring, the gorgeous new VIP hospitality building was nestled, allowing guests the perfect vantage point to see all the action as the class unfolded in the late afternoon sun.

Of the 55 starters, a total of 21 riders went through clear and lined up ahead of the testing second round, which consisted of a twisty course with daring turn-backs and gallops to fences. The final fence was originally number one in the first round, and comprised of a gallop to the last with a big oxer to finish. While the pace was fast, mistakes were made, with only 12 out of the 21 riding double clear in total. Pénélope Leprevost (FRA) put forward a strong performance with her mare Nice Stephanie, as did Marco Kutscher (GER), Lauren Hough (USA), Simon Delestre (FRA), home rider Willem Greve (NED), Edwina Tops-Alexander (AUS) and Scott Brash (GBR) however all were unable to beat the pace set by Pius Schwizer (SUI).

Pius won the trophy with his careful but technical round, and took a stride out by galloping on the forward stride from the second last to the last fence, shaving valuable seconds off his final time.

Earlier in the day Luca Maria Moneta (ITA) rode Bonheur S to victory in the early morning opening speed class. Luca is a well respected rider against the clock, and rode Bonheur beautifully, who was ideally suited to the fast paced 1,45m class. It was clear from the offset that his aim was to go in to win it, and win he did in 34.96s almost a second faster than second place man Philippe Rozier (FRA) and Quel Chanu. Third place went to Reed Kessler (USA) who rode a beautiful round with KS Stakki to claim the final podium position.

Tomorrow will see the official opening ceremony take place at 19:00 local time, ahead of the exhilarating Team Competition which kicks off at 19:40. Both will be streamed live via GCT TV and it’s set to be a spectacular day of sport and entertainment ahead of the Longines Global Champions Tour of Valkenswaard Grand Prix, which will see the intense ranking battle move up a gear as we head to the final few rounds of the season.