For the second year in a row, USA’s McLain Ward and Rothchild emerged victorious in the $210,000 CP Grand Prix during the ‘Continental’ Tournament at Spruce Meadows. It all came down to the wire in the tournament’s final event on Sunday, as Ward and Rothchild went last in an 11-horse jump-off to win by nine one-hundredths of a second. Todd Minikus (USA) and Babalou 41 finished second, and Richard Spooner (USA) and Chivas Z placed third. 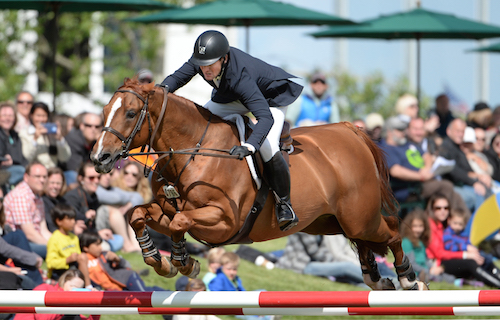 Anthony D’Ambrosio (USA) set the course for Sunday’s grand prix, with 49 starters in the first round, 11 to advance to the jump-off, and five double clear rounds. Richard Spooner (USA) was first to go aboard his own Chivas Z, and threw down the gauntlet with a speedy round in 42.03 seconds. Todd Minikus and Two Swans Farm’s Babalou 41 were faster in 40.98 seconds to take over the lead. Georgina Bloomberg (USA) and Gotham Enterprizes’ Lilli followed with a steady clear round in 49.72 seconds to eventually place fifth. Conor Swail (IRL) returned with a clear in 45.65 seconds to place fourth aboard Grand Cru vd Vijf Eiken, owned by Vanessa Mannix. Last to go, McLain Ward and Sagamore Farm’s Rothchild laid it all on the line in the winning time of 40.89.

To earn the winner’s share of $70,000 and defend his title as returning champion, Ward knew that he would have to take big risks. He had seen Eric Lamaze slip in the tight rollback to the second to last jump and have it down, but he took his chances and turned tighter. Despite his own slip there, Rothchild gave it his all to clear the final obstacles.

“Todd set a hell of a jump-off round,” Ward noted. “I did not need to see it. I knew what the time was and I had seen Spooner. I knew I had to do the best I could. I was a little bit lucky at the second to last, but my horse scrambled over it. Then there was nothing really to lose to the last and it worked out.”

“I did notice Eric slip; it was hard not to notice,” Ward detailed. “I always think in that situation, especially a competition of this caliber, you cannot make the choice to then go wide. It is really not an option to go wide because then you lose, so I knew I was going to try to turn. I also slipped a little bit, but I got away with it and then I was lucky to pick up on a good distance to the last. The horse really came through strong to the last fence because he had helped me out a little bit. It was a hard question to ask him.” 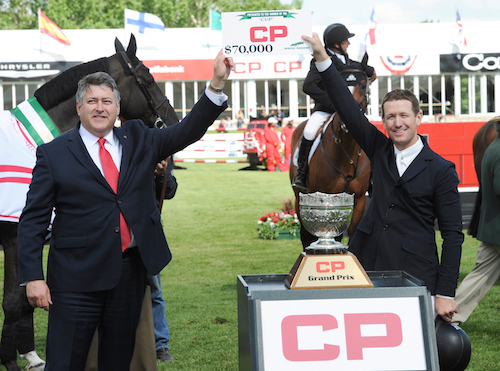 Ward and Rothchild, a 14-year-old Belgian Sport Horse gelding (Artos x Elegant de L’Ile), were recently named to the U.S. team for the Pan American Games in July. With that on the horizon, as well as the chance to earn back-to-back victories in the grand prix, the rider was hoping for a good result.

“It is always hard to defend a win because there is nowhere to go but down,” he admitted. “I was really happy with it. We have been trying to build Rothchild up for the Pan Am Games. He has had a slightly up and down year. I jumped him here on Thursday and ended up actually scratching him on Friday because a storm was blowing in right when I was going to go. He is not a great horse in the rain and at this point in his career I don’t need to force the issue, but it paid off well. I am really thrilled that he is in good form and I hope we can just try to maintain that into the Pan Am Games in Toronto.”

Todd Minikus and Babalou 41 are the alternates for USA’s Pan American team, so Minikus was also happy to have a great result leading up to the Games. Babalou has stepped up to have great success this year at just ten years of age.

“She has had a great year,” Minikus stated. “We started off a little rough here at Spruce Meadows last week to tell you the truth, but today she jumped great. It took a week or so for her to grow up here and understand. She has not had a lot of experience on the grass.”

“I have been back a couple of times for the ‘Masters’, but I have not been here for the summer since 1997,” Minikus detailed. “My mare is the alternate for the Pan Ams and she needs the experience, so we are back and we are glad to be back.”

Commenting on his jump-off, Minikus noted, “I was a little cautious in the rollback to the wall in the jump-off, and McLain was probably inside of me there. I have been a fan of Rothchild since he was a young horse. I always razz McLain that I should have been his rider, so to get beat by him is just okay. I am more than happy to be second and hopefully now I can get my mare organized for the rest of the tour here.”

Course designer Anthony D’Ambrosio also set the track for Ward’s win in 2014 and was happy with another great result.

“I thought it was a very good competition,” D’Ambrosio stated. “I think that the horses looked beautiful jumping out there. We had nice results, a good number of clears and I think it was very nice sport for the spectators. I think it was good for everybody involved.”

The riders agreed, pointing out the balance of faults throughout the course.

“At the beginning of the class there were rails everywhere and it looked quite difficult,” Ward noted. “It was not one spot; you had to pay attention, and as the class developed and we got to the stronger horses, obviously the waters receded and we started to see people answer the test. I think when you see people answer the test, everybody takes a deep breath and starts to relax a little bit. You saw some clear rounds follow.”

“It was a very good course today. It was a nice use of the ring and a nice, balanced test,” Ward continued. “I also thought the time allowed was completely appropriate; I thought it was right on the money. It was good sport and a very exciting jump-off and the horses came out of the competition very well.”