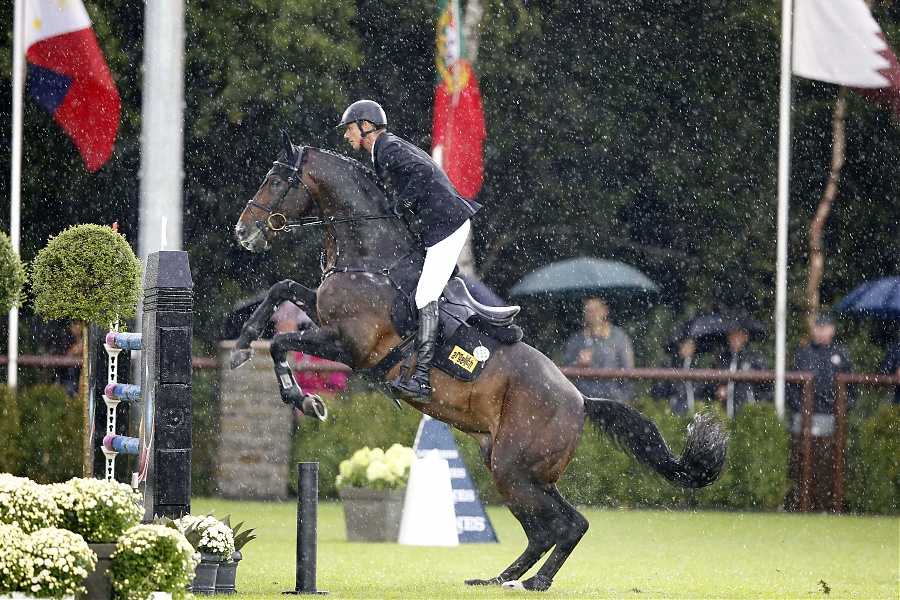 Marco Kutscher (GER) seized a phenomenal victory in the highly-charged Longines Global Champions Tour Grand Prix of Valkenswaard as Scott Brash (GBR) held on to his overall ranking lead with only three legs left in the 2015 title race.

18 out of the world’s Top 20 riders were among the elite taking part in the 12th Grand Prix of the series and, despite heavy rain, the footing in the new Tops International Arena remained exceptional and a nail biting jump off saw six riders battle it out for a share of the €300,000 prize purse.

It was an afternoon of high drama as Uliano Vezzani’s sweeping course over the vast grass arena tested World and Olympic champions to the full and filtered the field of 50 starters down to a climactic jump off of the best six. Throughout the course there were challenges set to test the very best in the sport and, as the rain intensified, many picked up faults in all areas of the first round. The 1,50m high and 1,50m wide oxer caused a few issues as it was placed so early on in the course.

A total of 12 riders came away from round 1 clear, with America’s Reed Kessler impressing early on with her chestnut mare Cylana and Gregory Wathelet (BEL), Kamal Abdullah Bahamdan (KSA), Ludger Beerbaum (GER) and Audrey Coulter (USA) just some of the riders through. Ranking leader Luciana Diniz (POR) made it into the second round, but picked up an unlucky four faults with her grey stallion Winningmood.

The second round saw yet more drama and excitement with another vast course than featured up to huge 1,60m oxers and long related distances. Home rider Henk van de Pol (NED) and Willink were the first to ride double clear – a popular result as the crowd cheered them through to the last fence. His compatriot Harrie Smolders (NED) looked to be in contention for the jump off with a strong performance on Regina Z, until a scary moment saw him almost unseated before righting himself much to the relief and admiration of the crowd.

Six strong contenders took to the ring for the final round of the Longines Global Champions Tour Grand Prix of Valkenswaard. There was absolute silence as once more Henk van de Pol (NED) was the first to set the pace, proving to be a solid Grand Prix combination in 36.80seconds.

Bassem Hassan Mohammed of Qatar raised the bar further still with an impressive 35.82 on Eurocommerce California and was watched by a delighted Sheikha Mayassa Al Thani from the Royal Box. Simon Delestre (FRA) and Qlassic Bois Margot raised the bar with their third clear round of the day crossing the finish line in 34.97s. World Number 1 Scott Brash (GBR) then took centre stage with Hello Sanctos, however had an unlucky fence down to finish on four faults. It was down to the wire as last to go Marco Kutscher and Van Gogh delivered a super slick clear stopping the clock at 34.86s – a split second flourish that left the crowd gasping. Marco admitted it was his first big win on the 13-year-old bay stallion and said: “I still can’t believe it!”

Ranking leader Scott Brash (GBR) said he was disappointed at his four faults in the jump off on Hello Sanctos but said: “I took a chance and that is the way it goes. He is still a superstar. We are in a good position.”

Top sport and entertainment attracted families and guests from across the world. Thousands of fans packed the impressive new grandstands to cheer on their show jumping heroes and heroines. Members of Royal Families, including Sheikha Mayassa bint Hamad Bin Khalifa Al Thani, sister of the Emir of Qatar, global business leaders including Boeing Chairman Jim McNerney, Netscape Founder and philanthropist Jim Clark and rock legend Bruce Springsteen were among the VIP guests.

It was a stunning inaugural event for the new Tops International Arena, which drew praise from spectators and guests alike. The high adrenaline championship battle now moves to Rome where the giants of show jumping will lock horns in another spectacular new venue on the circuit.

Jan Tops, Founder and President of Longines Global Champions Tour: “I was very proud today with all the public here from Valkenswaard and the Netherlands, it was a great attendance and fantastic sport, they stayed to the end in the rain and we directly tested the facility, it is rainproof, and the footing and paddock held up amazing. After last night, I was very pleased with the team competition and this exciting round from Marco, it was well deserved, very slick, a great winner.

“You always hope, but you never know before how things are working. Myself, and my whole team work day and night and I thank to thank them as well very much. They are great people, they give always the maximum effort and without them it would not be realised. We have a vision always and we have a goal, but when it works out like this it is always a dream come true.

“Scott of course is in a good position, it is not totally in the bag, everything is possible but for me Scott is still the favourite.”

Juan-Carlos Capelli, Vice President, Head of International Marketing of Longines: “I would like to thank Jan today. This incredible new facility is one of the best in the world and for that I would like to congratulate the team, especially Jan, congratulations. Today we have again an incredible show, the jump off was fantastic, the last horse, the last second, it was a perfect moment in our sport. Again, Scott, it is a pleasure to be with you today – you are far away at the top and also the Longines rankings of the FEI, congratulations.”

Scott Brash, LGCT Ranking leader: “There’s still a long way to go, a lot can change. I miss the next one but I will be in Vienna and Doha. I’m sure it will be exciting until the end again.”

Simon Delestre, 2nd place rider: “First I’d like to say congratulations to Jan for making this place really amazing. It was raining today and for grass the arena and the footing was really exceptional. For Qlassic, again he had a fantastic three rounds today, he went already third in London two and a half weeks ago and he was every time placed for the last Grand Prix, I have great confidence in him at the moment. For winning the title, I don’t think I have a chance, but to be in the first three, because I have two results counting and still one to catch. If I can catch a good one again then I think I have a chance of being in the top three.” 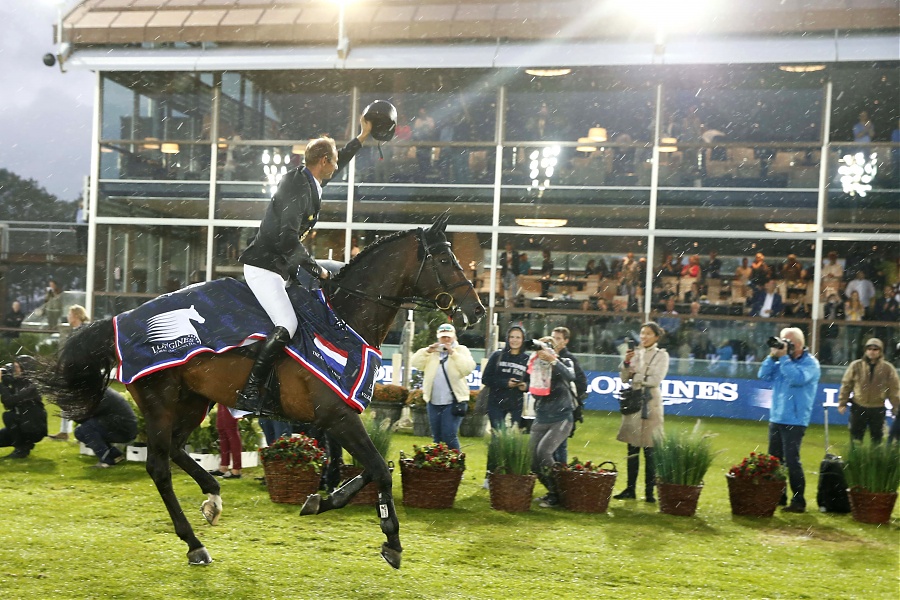 Marco Kutscher, winner: “First of all I would like to say thank you to Longines and to Jan. I think we have set a new standard in our sport and I think we will have many great shows here. From my point of view, I still can’t really believe it, van Gogh has not really been competing on this level much as my other two horses are injured. I chose him for this show and he did a great job today in the jump off; he was amazing and Simon he left a little door open so I’m happy.

“I’ve won three or four LGCT Grand Prix, but I am especially happy today because I did’t expect it at all. Some shows you come to knowing that your horse is in good shape, then you are almost disappointed when your horse doesn’t work, but this way was absolutely the other way round and it makes it very special. I don’t think I have won any class with him so far and so to win a 5* Grand Prix is amazing.”

Bassem Hassan Mohammed, 3rd place rider: “I’m really happy with what I did today and what California did. I must say thank you to everyone, thank you to Jan Tops for everything he did for us and congratulations to the Qatar Equestrian Federation and Sheikh Joaan and everyone’s support. It’s really special for me today, 3rd in the Grand Prix in my home, we’re really happy for this result. Thank you for Sheikha Mayassa [Al Thani], congratulations for her too, we’re really happy to see Sheikha Mayassa here to support us and I know me and her and everyone would like to see me in first place, but it’s ok, I tried and congratulations to Simon and Marco. California did a great job today, she jumped amazing, even in the jump-off she jumped very good, I’m really happy.”