The Global Champions League made an impressive debut on French soil with another nail-biting round of thrilling competition as the twelve teams battled it out against the backdrop of the Chateau de Chantilly for the intense overall ranking battle. Madrid in Motion stormed to their first victory of the season, with Pedro Veniss and For Felicila uniting with Gonzalo Añón Suarez and Qlamp d’Ivraie to ride a stunning round seven of what is turning into a fascinating debut season championship. An ecstatic Madrid in Motion rider Gonzalo said ‘today was our day’ with teammate Pedro agreeing and saying ‘I just love the [League]!”

The mighty Rome Gladiators carried their momentum through from their recent win in Madrid, with Laura Renwick and Heliodor Hybris combining with Marlon Módolo Zanotelli and Valetto Jx for the first time this season to take a strong silver medal. Bronze went to another new combination, with Roosje Brouwer riding Van Helsing and Kevin Jochems with Zanzibar putting in a stunning performance for team Cannes Stars and lifting the team up to 5th overall on the rankings.

The drama in the overall GCL Rankings has moved up a gear once more, with Valkenswaard United narrowly holding onto their lead with a total of 164 points overall. Hot on their heels are the Monaco Aces, who sit on 160 points, and following their string of success, the Rome Gladiators have jostled out the Antwerp Diamonds from third and currently sit on 157 points overall.

The final competition of the day concluded four fantastic days of show jumping at the stunning Chateau de Chantilly, where fans filled the grandstands despite the rain and cheered on the teams throughout the competition. The atmosphere was electric, with the crowd clapping the riders into the arena and were up on their feet for a Mexican wave for the spectacular lap of honour.

The first round was a long course; 13 fences took them all around the expansive grass arena with the Grand Stables providing a stunning backdrop. GCL Ranking leaders Valkenswaard United showed no signed of pressure with two beautiful clears from Alberto Zorzi and Eduardo Menezes, a combination who took the Silver Medal in Shanghai. Joining them in the second round with a zero score was Shanghai winners Cascais Charms, featuring the fierce combination of David Will with Monodie H and Andreas Kreuzer who rode Stalido. Rome Gladiators were the third team to go clear – with Marlon Módolo Zanotelli joining forces with Laura Renwick, who helped the team to victory in Madrid the previous weekend.

The course allowed no margin for error and a rub of a pole for both of Antwerp Diamonds riders Audrey Coulter and Marc Houtzager saw them fail to progress through to the second round; an unusual result for the strong team who were in third place and consistently on the podium this season so far. There were twelve clears overall, with Cascais Charms, Valkenswaard United, and the Rome Gladiators joined by the Cannes Stars, Madrid In Motion, Monaco Aces, Shanghai Swans and Doha Fursan Qatar as the eight through to the next phase of the competition.

Round two saw a bigger course and a tight time allowed of 77 seconds; while the jumps were imposing and a true test of the top horses and riders at the full height of 1.55m, the course was flowing with perfect conditions underfoot. Clears came thick and fast, however many of the teams picked up time faults, adding agonising points to their overall combined tally and shuffling the order overall.

Of the teams carrying zero scores going into the second round Alberto Zorzi from Valkenswaard United and Andreas Kreutzer of Cascais Charms were the first riders to go, and again jumped smooth clears. The pressure was then on their teammates to match their flawless rounds, and the temperature rose as the final rounds played out. 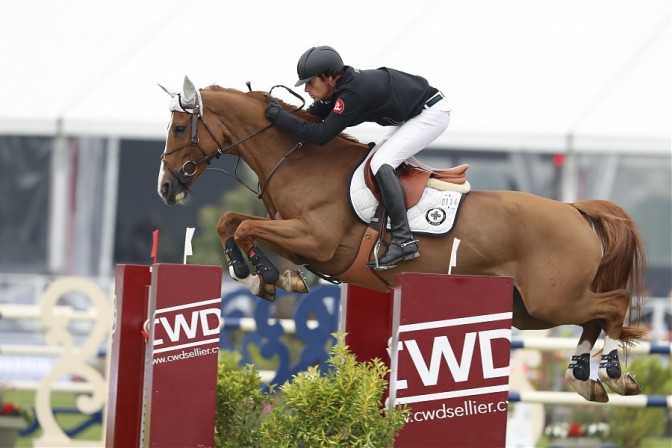 The tensions were palpable and the team rivalry high as riders watched nervously from the kiss n’ cry as their team-mates went into the ring for critical rounds.

There was disappointment for Valkenswaard United whose 12 faults dropped them to 6th place overall. This meant the ultimate pressure was on the final rider, Cascais Charms’ David Will who entered the ring knowing only a clear or single time fault would win it his team. David Will and Monodie H jumped beautifully, but in the latter half of the course the pair rolled the delicate poles, dropping them down the order and putting them in 5th overall. 4th went to Doha Fursan Qatar, following a beautiful double clear from Faleh Suwead Al Ajami with the grey Come Soon, and an unlucky four faults and time fault from Sheikh Ali Bin Khalid Al Thani and Imperio Egipcio Milton putting them on 5 faults combined.

So victory was handed Madrid in Motion who finished with just 2 time faults over the two rounds. Second went to Rome Gladiators who finished on 4 faults overall and completing the podium was Cannes Stars who rounded out the top three on 6 faults combined.

It was a much needed victory for Madrid in Motion who moved off bottom spot into 10th in the overall rankings. The League now heads to Cannes in the south of France for round eight of the thrilling Championship, with speculation about which riders the teams will field as strategy and tactics become ever more crucial. 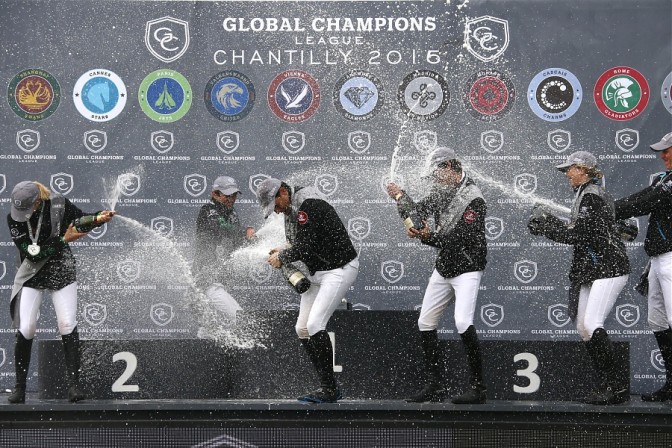 Jan Tops, Co-Founder Global Champions League: “Everything counts, and the competition is very easy to follow. No one can have a bad round – you could be in the lead and then end up fifth, and also the other way around. I like it more and more, I think the concept looks very good. You cannot take any risks with which horses you bring – unless you take your best horses you have no chance to win. You can see everything is very close, it will be exciting to the end. I’m pleased for Madrid in Motion – they had a slow start to the year and missed one in Shanghai so for them to win today was a great win. Rome Gladiators are coming back – these last two or three events they’ve been doing very well. It’s incredibly tense for all the riders, they are rooting for each other. Valkenswaard United and Cascais Charms looked good to win, but because of the pressure had two or three down. The crowd here are great – they stayed to the end, even with the weather. The workers here in Chantilly are special, the course builders, the volunteers, everyone helps to make a great atmosphere here.”

Pedro Veniss, Madrid in Motion – Winners GCL Chantilly: “I’m very happy. My mare jumped amazing. Gonzalo had a time fault in the first round, and I said to him ‘I think if we have two clear rounds we have a big chance to win’ as it’s always difficult courses, and it worked out today. I just love the [League] – I think it’s super!”

Gonzalo Anon Suarez, Madrid in Motion – Winners GCL Chantilly: “It was amazing to win here – it’s a great place to win! Not great weather, but it was a great opportunity for us. Pedro was great, and my horse was amazing as always – we are really happy. We’ve often been in the second round this season, fighting for it, but not really lucky – but today was our day.”

Laura Renwick, Rome Gladiators – Silver Medallist GCL Chantilly: “I had a bit of bad luck in the first round after what happened with the dog who ran onto the course and my fault being taken away. But the second round I had another bit of bad luck with my martingale breaking – I didn’t get a very good distance to the combination, which was the reason I had it down. I was disappointed with myself but Marlon came back really strong in double clear and we were really close in the end.”

Marlon Zanotelli, Rome Gladiators – Silver Medallist GCL Chantilly: “Valetto is an amazing horse who often jumps double clears. Even if Laura had one down, she put me in a very good situation as she was one of the fastest in the rounds so I only had to worry about going clear inside the time to put pressure on the others. So it was good for us in the end and I’m very happy with second place.”

Kevin Jochems, Cannes Stars – Bronze Medallist GCL Chantilly: “It was a great course today – we had only one team who jumped clear with two time penalties. I think we had a great result, and I’m very, very happy with third place.”

All photos are credited to : Stefano Grasso / GCL