Great Britain’s Laura Renwick had an impressive two more trophies to add to her cabinet today after a phenomenal double win at the opening day of competition at the Longines Global Champions Tour of Madrid. With two of her top horses in action in the stunning Spanish setting, Laura won both CSI5* classes – the CSI5* 1.45m Volvo Trophy and the CSI5* 1.50m Massimo Dutti Trophy – in a beautiful display of horsemanship against a formidable world class field.

Indeed it was such a high calibre line-up of horses and riders in action, that the top 13 placed combinations in the Massimo Dutti Trophy all finished just tenths of a second apart – highlighting the exhilarating action and world class show jumping on display this weekend at the LGCT Madrid.

Talking about her second win, an ecstatic Laura said afterwards: “I’m a bit in shock! To have the person who was in 13th place on the same second – that’s unheard of really!”

The opening day of competition at the Club Campo Madrid saw the world’s top riders in action ahead of sixth round of the Championship – the Longines Global Champions Tour Grand Prix of Madrid – which will take place Saturday at 17:00. Watched on by VIPS including Bruce Springsteen and passionate fans who cheered the clears through enthusiastically, the picture perfect grass arena played host to world class competition this afternoon as the best horses and riders in the world battled it out for the CSI5* 1.50m Massimo Dutti Trophy; a two phase test against the clock. 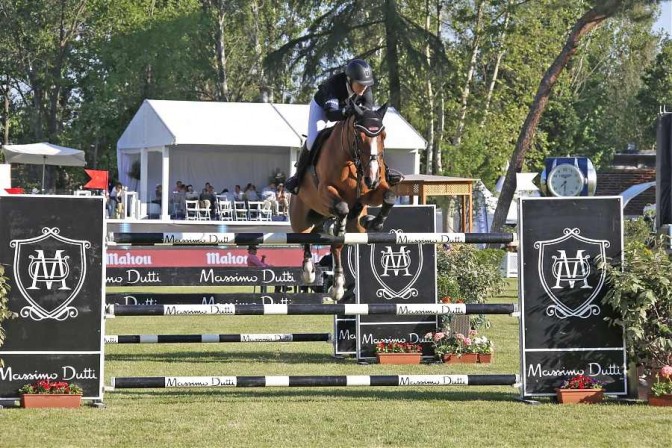 The field of 47 riders had just one round to earn their final positioning in the €25,000 competition, with an impressive tally of 26 jumping clear. Laura Renwick (GBR) set the pace to beat midway through the course, as her big striding Bintang II ate up the distances, allowing her to drop a stride at crucial fences throughout the fast paced course.

Olivier Philippaerts (BEL) and H&M Challenge v. Begijnakker put in a fantastic performance, but crossed the line in 26.19s – just tenths of a second off the winning time – to finish in second overall. The times were so tight that the top 13 riders were all within a second of each other – Kevin Staut (FRA) Ayade de Septon et HDC finished on 26.27s, Jos Verlooy (BEL) and Sunshine on 26.43s, LGCT Ranking leader Christian Ahlmann (GER) and Caribis Z on 26.49s, all the way to 13th place man Henrik von Eckermann (SWE) and Solitaer 41 who finished in 26.94s.

Two local riders, Eduardo Álvarez Aznar (ESP) with Rico Revel and Gonzalo Añón Suarez (ESP) with Qlamp d’Ivraie, both jumped clear, much to the delight of the crowd, but it was Laura who triumphed overall, taking home the lion’s share of the €25,000 prize pot.

Earlier in the day Laura and her stunning eight year old gelding MHS Washington took the CSI5* 1.45m Volvo Trophy. The pair beat another impressive field of 57 international riders in the two phase competition, jumping clear in 29.46s in the second part of the round. Hot on her heels was America’s Laura Kraut who rode the beautiful Andretti S to second in 29.95s, just tenths off the British Laura’s time. With both riders competing for the Global Champions League team, the Rome Gladiators, anticipation is mounting ahead of Sunday’s team competition which will kick off at 18:00 local time.

The two created a significant gap to the remaining clear riders, with third place rider Andreas Kreuzer (GER) and Baloukira crossing the line in 33.97s, a full four seconds behind. The course was a fair test for many of the world’s top horses and riders, giving the first class combinations their initial taste of the expansive grass arena ahead of the LGCT Grand Prix of Madrid. Utilising the full space, riders galloped between fences, however some carefully placed verticals and tight cut back turns gave the riders something to think about.

Other notable performances saw John Whitaker and his famous stallion Argento finish in 5th, with the pair leading for most of the way. Bassem Hassan Mohammed (QAT) and Argelith Squid performed well, as did home rider Eduardo Álvarez Aznar (ESP) and Rokfeller de Pleville Bois Margot and young star Jos Verlooy (BEL) with Caracas who looks to be on strong form this weekend.