“I’m curious now!” the National Dressage Coach, Monica Theodorescu, said with a sigh of relief, after she greeted her three riders after their performances in the Deutsche Bank Prize at the CHIO Aachen 2016 – whereby none of three had been awarded a score under 86.925 percent. In the history of German dressage in Aachen this has never happened before: Three pairs over 80 percent in the Grand Prix, the Prize of the Tesch Family, three times over 80 percent in the MEGGLE Prize, the Grand Prix Spécial. That is an absolute record. And then the same three even took it a step further in the Deutsche Bank Prize by claiming the top three rankings there as well.

Kristina Bröring-Sprehe won the most famous prize in the dressage sport in the most famous dressage arena in the world with a score of 88.825 percent, a personal record. Isabell Werth came second with Weihegold OLD on a score of 86.950 percent, followed closely by Dorothee Schneider with Showtime FRH on 86.925 percent. Rio here we come!

Kristina Bröring-Sprehe reported to the National Coach (who couldn’t watch her, because she was helping her two other protégés warm-up for the competition – “But I heard the music and knew exactly where she was in her choreography!”) after her ride somewhat timidly about the only mistake that she had made in the first double pirouette. But then when the scores flashed up, this moment was forgotten. “I am delighted,” sighed the number one in the world rankings, who almost beat the multi-championess Charlotte Dujardin (GBR) with Valegro at the European Championships last year. She came just a few points behind her. The two will come up against each other again soon…

Isabell Werth’s world was back in order again today. She was eliminated from the WOTAX Prize yesterday, because she made two errors of course – totally untypical for the many-time Olympic gold-medallist, World and European Champion! Today, she knew what route to take – even though she rode the slightly revised freestyle routine to new music, a 1970s Italo pop medley, for the first time today with Weihegold. The highlights of the freestyle have a special soundtrack: “Dance Samba with me” – very fitting!

Dorothee Schneider and Showtime FRH were the next pair to provide goose-bump moments today. Showtime performs to a piece of music that couldn’t be more fitting for the stately dark bay horse: the E guitar sounds of the queen classic “The Show must go on”. One can hardly believe Schneider that this show-maker used to be a rather shy and introverted horse. She has turned the 10-year-old gelding into a world-class horse that hasn’t reached the zenith of his ability by a long way yet! We look forward to welcoming Showtime at CHIO Aachen 2017 – let’s wait and see if he can perhaps leave his colleagues trailing behind him then. 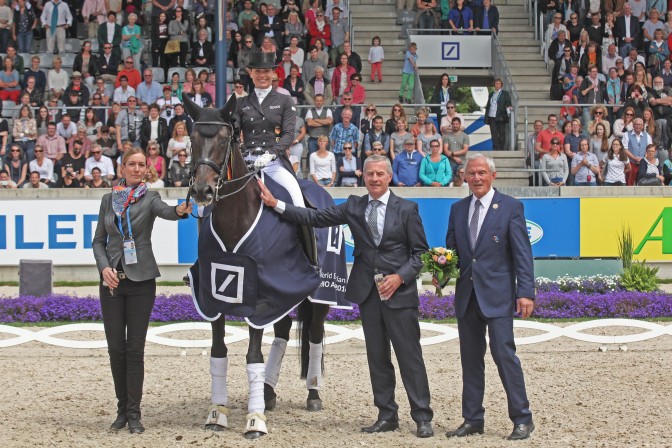