When the Top 10 riders in the world gather under one roof to battle it out to be crowned champion, excitement, tension and world-class competition are guaranteed. The crowds watching the Rolex IJRC Top 10 Final at CHI Geneva were privileged to have experienced a thrilling encounter in this year’s competition, with Rolex Testimonee Kent Farrington riding the wonderful Voyeur, racing to the top of the podium and taking his first ever win in the competition.

Speed and accuracy are essential to winning the Rolex IJRC Top 10 Final. Staged over two rounds with no jump-off, and with eight riders taking a clear into the final round, expectation was high that the final round would produce a classic in this, the fifteenth edition and the eleventh time that it has been staged at CHI Geneva.

Second round clears were proving hard to find until Kent Farrington and Voyeur came into the arena. Living up to their deserved reputation as one of the fastest partnerships on the circuit, they sped around the course whilst the crowd held their collective breath, and laid down a lightening fast 37.54 second round; it looked difficult to beat. Both Simon Delestre and Daniel Deusser followed Farrington onto the course and although both succeeded in going clear, they simply could not match Farrington’s time. It was left to the final two riders, Rolex Testimonees Bertram Allen, the youngest rider to ever compete in the Final at just 20 years old, and the 2014 winner, Scott Brash, to challenge Farrington. Valiant in their efforts, not even the combined athleticism of equine superstars Molly Malone and Hello Sanctos could match Voyeur, and Farrington was crowned the winner in only his second time of competing.

Speaking after his victory, Kent Farrington said, “My horse was amazing today; I had to go early in the second round and I knew that some of the fastest riders were coming after me. This is a great way to start off with Voyeur at the show ahead of the Rolex Grand Prix on Sunday. My horse has been on form so I hope he continues for the weekend.”

The Rolex IJRC Top 10 Final was started in 2001 by the International Jumping Riders Club and similar to the ATP Finals in tennis, is the only competition that rewards consistency throughout the season, by inviting the top 10 highest-ranked riders in the world to go head-to-head over two rounds of jumping. The competition has been won by several of the greatest names in the sport including Rolex Testimonees Rodrigo Pessoa and Meredith Michaels-Beerbaum. Kent Farrington now joins this group of legendary names engraved on the exclusive winner’s trophy.

All eyes now turn to Sunday and the Rolex Grand Prix, where one rider will start their journey towards emulating Scott Brash in winning their first stage of the Rolex Grand Slam of Show Jumping. 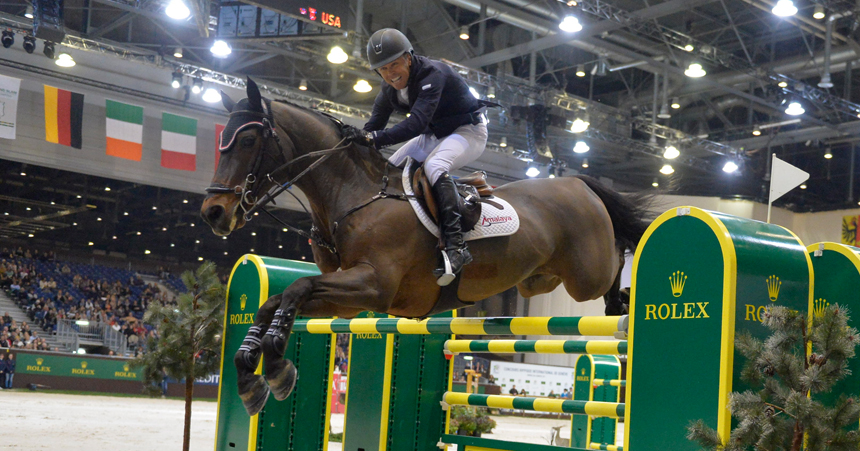 The results of the 15th Rolex IJRC Top 10 Final: