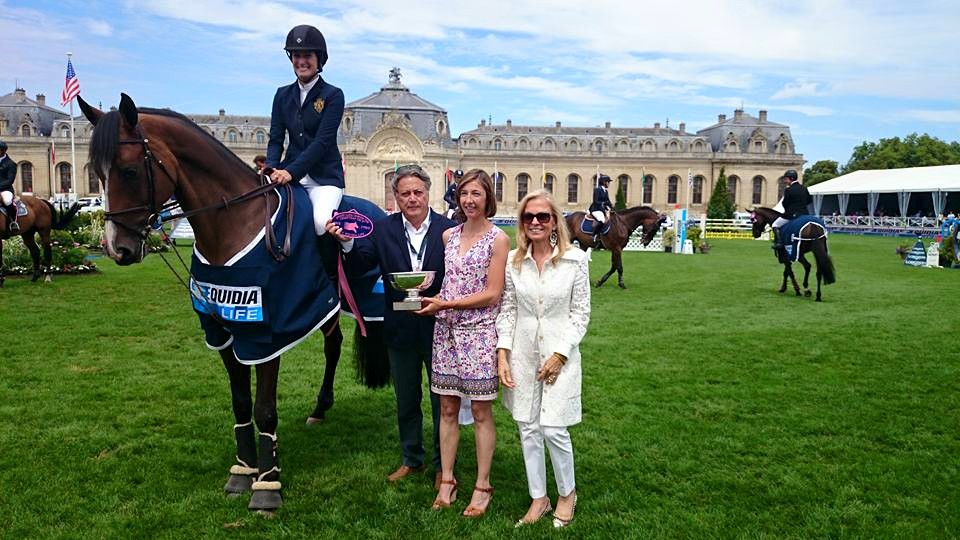 She may have been born in the USA, but Jessica Springsteen is fast becoming a crowd favourite in Europe after taking the honours in the 5* speed class ahead of today’s Longines Global Champions Tour Grand Prix of Chantilly.

In a special surprise for the young American, US ambassador to France Jane Hartley, joined the prize giving ceremony and presented the first place trophy to the thrilled rider. Jessica’s mother Patti said she was ‘delighted’ after proudly watching the class along with Jessica’s trainer Edwina Tops-Alexander.

Jessica, whose career has rocketed over the past few years, was almost 2 seconds faster than her nearest rivals with her bay mare Davendy S in the 1.45m speed class. She finished on 54.38 ahead of Gregory Wathelet (BEL) on Reisling du Monselet on 56.23 and Cian O’Connor (IRE) on Be Gentle who finished on 56.28.

Formidable speed machines Luca Moneta, Patrice Delaveau, Harrie Smolders and Maikel van der Vleuten all jumped clear but could not catch her impressive time. The beautiful grass arena in front of the Royal Stables is all set for today’s €300,000 Grand Prix. Thousands of spectators are due to watch the world class competition and VIP guest will also have fantastic views of both the competition arena and the historic Chateau of Chantilly. Chic hospitality lounges by Hermès and Moët & Chandon ring the arena.

Jessica said, ‘I’m so happy and I love this venue.’