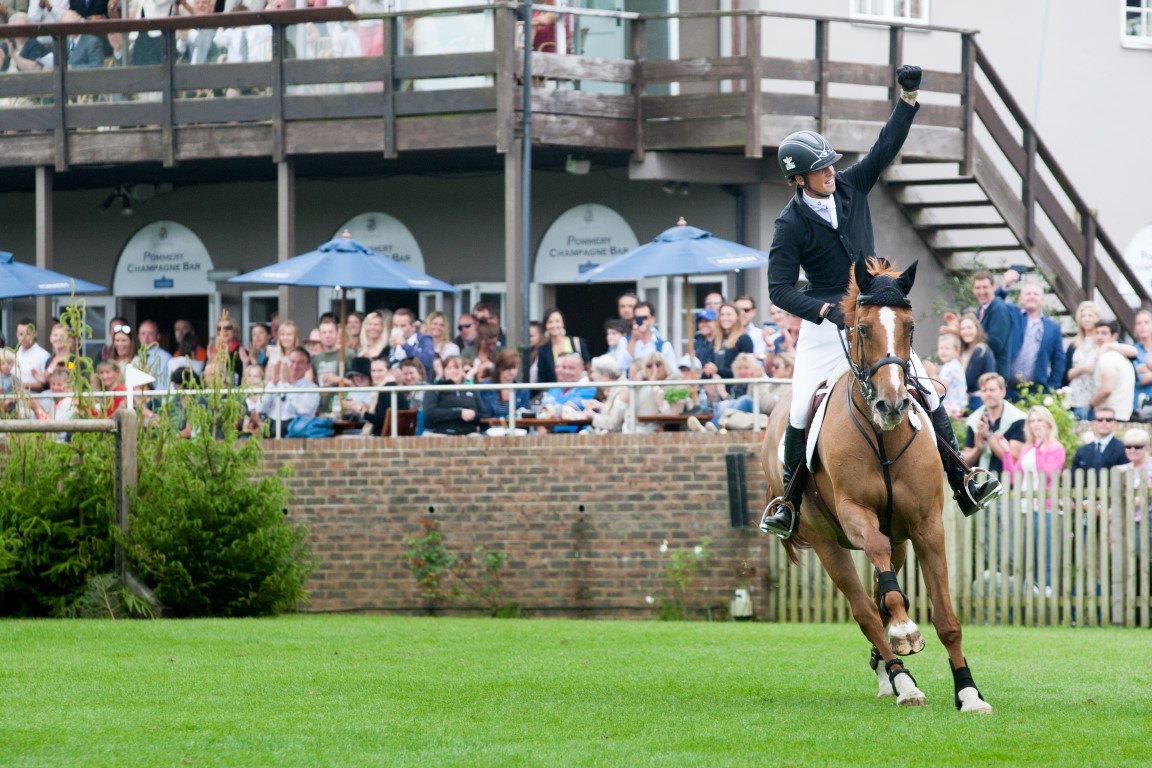 Buckinghamshire-based Trevor, 36, was the only competitor to have not just one but two former winning rides to compete, and he was the firm favourite to retain the title he won for the first time twelve months previously. In 2014 he took home the famous Boomerang Trophy for the first time when riding the ‘one-eyed wonder horse’ Adventure De Kannan, but this year it was Trevor’s first ride, Loughnatousa WB, who netted the only clear round to take the title.

‘WB’, like Trevor, already has a Derby title to his name. He became the first horse to win the Derby under two different riders – the chestnut gelding having first won in 2012 under his previous rider, Paul Beecher. That year the horse won from the unfavourably early draw of first to go, and this year with Trevor he once again set the standard early on, jumping clear from a draw of seventh out of a field of 37 starters.

Britain’s William Whitaker became the first of five riders to finish on four faults with Glenavadra Brilliant; and he was followed by Irish Olympian Billy Twomey and his Hickstead Derby first-timer Diaghilev, who only knocked the first part of the Devil’s Dyke. As the class moved towards the business end, Steven Franks became the third of the four-faulters on Carlow Cruiser, a horse who has had a number of near-misses when it comes to winning the Hickstead Derby.

Trevor Breen was 33rd to go with his second ride, Adventure De Kannan, but hopes of both his rides going clear were dashed when ‘Addy’ ended up on eight faults. Nigel Coupe and Golvers Hill – who were placed seventh here 12 months ago – also got four faults, so only the 2013 winner Phillip Miller (Caritiar Z) and Harriet Nuttall (A Touch Imperious) could push it to a jump-off.

But eight faults for Phillip and four for Harriet meant the title was Trevor’s for the second year in a row.

“I knew I had a good chance because I was riding two former winners, but you never know and it’s such a tough course,” said Trevor. “It’s extremely difficult to win, and you need a lot to go right – and luckily everything did. I felt WB I was running out of petrol a bit towards the end so I was pleased I didn’t have to jump-off.”

Trevor also gave credit to his fellow Irishman Paul Beecher, who rode Loughnatousa WB to victory in the 2012 Derby. “Paul produced him his whole life so he has to take a lot of the credit – I’ve only ridden him for a year. It’s great for WB’s owner Patricia Brown, who is a huge supporter, and for Bernice Cuthbert who looks after Patricia’s horses.”

Harriet Nuttall was unlucky to have the first part of the Devil’s Dyke down to finish equal second with the other four-faulters. She has finished in runner-up spot in four major classes this week, but remained upbeat despite not taking home the winner’s cheque. “I’ve had the best weekend of my life. A Touch Imperious is just unbelievable, he has made my career, and I’d have paid good money to be second here,” she says. “I still think he has it in him to win. We’ll be back.”

Nigel Coupe, who also shared second prize along with Harriet, William Whitaker, Billy Twomey and Steven Franks, added: “As a sportsman you want to win and you want to see your name up on that board so it’s disappointing to have the four faults, but you’d definitely take that result.”

Earlier today, Emma Stoker from County Durham fought off stiff competition from some of the best young showjumpers to win the Hickstead Under 25 Masters. Riding Tallulah V, Emma proved to be the fastest of only two double clears.

Melton Mowbray-based rider Liz Harris won the Tattersalls and Retraining of Racehorses Thoroughbred Show Horse Championship, with the seven-year-old chestnut gelding Wild West, owned by herself and her partner Tommy Morgan. Liz, who was a former jockey and is now a Point-to-Point trainer, hailed the horse’s versatility, calling him the ‘ultimate all-rounder’. “He’s amazing, he’s so well behaved and loved it in that big arena,” she said.

The Equestrian.com Hickstead Derby Meeting has reached its conclusion after five superb days of top class equestrian sport. In total, more than 56,000 people watched the action via the new Hickstead.tv livestream, with viewers from 68 different countries tuning in from around the world. The action was also shown live to viewers in the UK and Ireland on the Horse & Country TV channel.

Hickstead’s next international fixture is the Longines Royal International Horse Show, which runs from the 28 July to 2 August 2015.