Six years ago, the Kingdom of Saudi Arabia sky – rocketed in the Show jumping sport when her son Abdullah Al Sharbatly claimed the Individual Silver medal at the World Equestrian Games in Kentucky … This was the first time ever in history that an Arab won a medal at such an event … Al Sharbatly joined the hall of fame alongside fellow Saudi Khaled Al Eid who is also the first Arab to win an Olympic medal.

For Abdullah Al Sharbatly, this Silver medal was not the end but it was just the beginning of a whole new era of triumphs, ambitions and fame, two years later in London the Saudi Team came back with the Bronze medal. So, we can easily say that his determination and drive to win is like no other … His confidence and belief in himself, his entire team and his horses is unparalleled – but that’s why he is a winner !

First we’d like to ask you about your debut at Hickstead back in 1995. It must have been an unforgettable experience to jump one of your first international shows at a place like this.

I actually rode all over England ever since I was 10 years old till I was 14, but of course Hickstead is something else. It’s a very nice show, it’s very famous and when I went there I was very young, of course – I was so motivated and excited. It was really a long time ago, I don’t remember if I was on ponies at the time or not (laughs).
How were your parents involved with horses back at that time. Do you think it’s important to have your parents’ support in this sport? Or a rider can do it on his own?
I think a rider can do it on his own, but it’s good when you have the support and motivation from your parents when you are young because you might not even get the idea to try it. So, if your parents are supporting you, you will do it even better. It’s very difficult to do an equestrian sport alongside school without your parents helping you because they will make it harder for you that you might even quit.
My father passed away when I was seven years old, so my Mother and Uncle motivated me a lot and were always pushing me to achieve more and more in the sport.
Let’s fast forward to the highlight of your very big career. You were always on top of the Arab League but then came the World Championships in Kentucky. Tell us first about Seldana Di Campalto and how you got her.
I actually started competing with the mare 6 weeks before the World Equestrian Games. We went to two shows – Gijon and Madrid, where I jumped two classes only. Normally, I was riding her twice a day to build up a big relationship with the mare, she was not an easy horse and I needed to have her on my side, with this mare you just couldn’t go against her! She had to like you, and you had to keep her happy so she would do it for you, otherwise she will quit and give up on you! Even on the flat, she can literally stop and rear up. You had to be very soft with your hands and legs.
I mean, I had a lot of difficult horses in the past, but everyone was telling me that Seldana was impossible to ride, and that it would be a big mistake to buy her but I didn’t believe all that. I believed in her and in our manager Mr. Ziad Abduljawad who motivated me to try her, he even said “ Go ahead and try her on a couple of jumps and get the feeling, but even if you are not very happy, we will still take her because I’m sure you will get a medal with her”.
But actually, I did try her and I had an unbelievable feeling on her. I told Natale [Chiaudani] that she’s not one of the most difficult horses I ever rode, because I had a lot of horses that were dis-united, with strange tempers, difficult mouths but she wasn’t really so bad.
So, the World Games came up 6 weeks after we bought her and of course it was an amazing victory for the Middle East and all the Arab countries to win an Individual Silver which never happened before.

Photo Source : www.wegcentral.com
Seldana was the only horse in the World Equestrian Games to jump five clear rounds before the final four. Up at that point, did you think you were going to win a medal?
Absolutely! I was telling the course builder to build it huge because I will jump clear everyday (laughs). I was also very confident before the World Equestrian Games, I believed in my mare and I knew that she was a top horse. I was telling everyone that I will win a medal because I might not have this opportunity again – Seldana was amazing and I was so lucky to have her.
In the Final Four, you rode three other superstars – Hickstead, Vigo d’Arsouilles and HH Rebozo. How was it?
Actually, I’m used to riding a lot of different horses so for me it wasn’t that difficult to ride them. They were all schooled very well, their riders did an amazing job to produce them. I had a lot of fun riding them all. For sure I liked Hickstead the most but even Rebozo was good to me. But you know what, Vigo was very interesting as well, because I trained before with Franke Sloothaake and I used to ride horses that were very similar to him, he had a couple of horses that were Vigo’s type stabled at his yard like one that was called “ No Time”.
So after the Games you were celebrated on a huge scale, and your name was crashing headlines all over the World. How was that?
Yes, of course. Especially for our country it’s something very special but it wasn’t like I came out of the blues. People in Europe also knew me before the Games, where I won a lot of ranking classes and I won the Grand Prix of Gothenburg with Goldex who was not the scopiest horse but still won it. For sure for the Americans I was new and it was a big surprise for them, and it’s very respectable to win a medal but I must say I’m a little bit disappointed from some people who didn’t like it, and I could see it till this day that they are not so enthusiastic about my medal. But, it doesn’t matter – it’s too bad for them really. 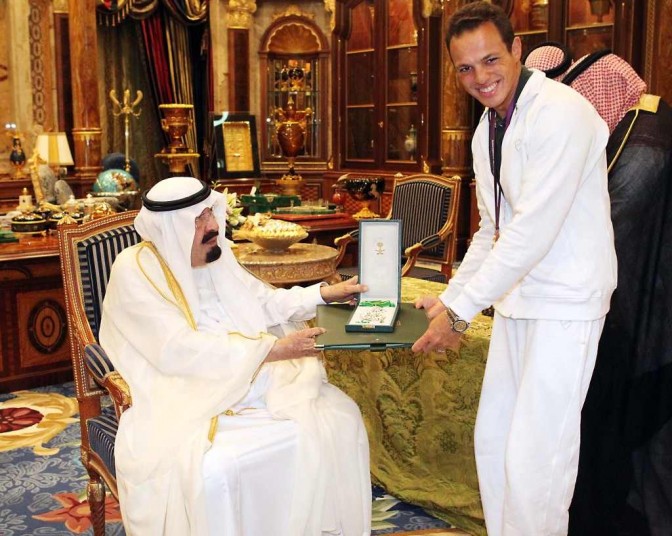 Photo Source : www.saudieqestrian.com
There are some rumours going around that there is a group of riders that try to give you a hard time and be against you at some of the shows you go to. What can you say about that?
(Laughs) Yes, it’s true. Successful people always have people who love to see them fail, and work to pull them down instead of focusing on themselves and raising the level of competitiveness higher. But it doesn’t matter to me, I love the sport and I will answer them in the ring every time. I know the group of riders that you are talking about ( I will not mention their names) but at the same time I also have a lot of European friends, so if those people are not happy with me then that’s too bad !
As a matter of fact, a very funny story happened before with Andrea, where a group of riders complained that she was skinny, because they really care about her! Of course she has to be fat so she can dance in the night-club that’s all that matters, and it didn’t matter that the mare never eats when she travels and she had ulcers, so she was losing weight of course, so even if she was hungry her body couldn’t take it! I had vets giving her the best medication for that problem and she was well looked after, and she won a lot !
Of course the FEI never looked into this because it was absurd, but I’m glad they looked into the real horse abuse that happened at the World Cup finals in Gothenburg, and of course the media didn’t stay quiet about it. It was caught on camera, on the FEI TV and everywhere.
Since you brought up this topic, do you think if this would have happened with an Arab rider, more serious measures would have been taken?
Yes it’s completely true, and it’s actually very disappointing and shameful but there are some racist people in this sport, which is not right and everything should be fair. I think the competition should only be in the ring and not by trying to ruin someone’s reputation – this is a very cheap method! A lot of this has happened in the past, which makes me feel sorry for them, because this is what I call “frustration” (laughs).
What happened to Seldana after the Games? And did she manage to get in foal?
She actually picked up an injury after Kentucky and she got in foal yes, so hopefully they become as good as her. She actually has two now, one is a year old and the other is two! 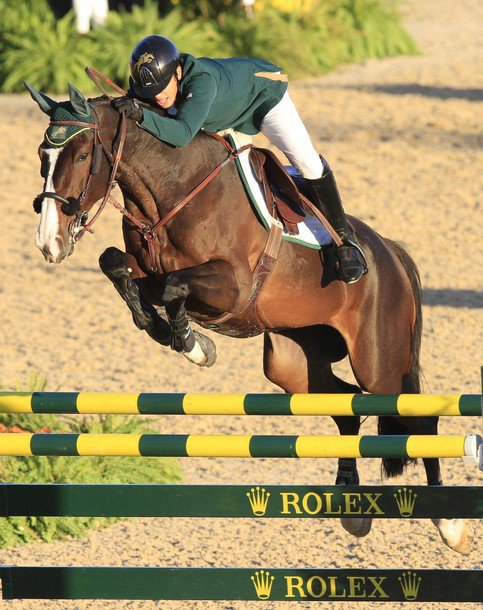 Photo Source : Amna K. Surour – Facebook
You are very famous for buying and selling horses so fast that you think you should be in the Guinness World of Records. What is your secret?
(Laughs) Well, I’m doing it as a business! I always believe that if someone gives me a good offer for my horse I will sell him. Of course, if this horse has a special place in my heart, that’s another story but otherwise I can sell. I also believe that you should buy and sell horses as long as you are getting profit, you should also let the other people make a profit and enjoy the horse that you enjoyed too. You shouldn’t be so selfish and say no, because if everyone did that then we won’t have the opportunity to buy anymore horses. You should buy, sell and enjoy it – it has to be like that in a circle! I mean everyone has their own opinion but I think it’s not right to be selfish and say no to selling especially if you don’t have sponsors like me, so when I make some profit I get to finance myself with other things because I don’t ask my family to buy me horses – I’m very independent !
Main Photo Source : www.dehoefslag.nl