Marion Hughes didn’t really catch the horse “bug” when she was a child, she was literally born with it ! Starting with ponies she finished that off with a Team Gold in Hannover back in 1984 with a pony she remembers quite well called ” Bright Ruby” !

Fate then brought Marion & the famous Flo Jo where things started shaping up at a whole new level and stepped onto the winners’ podium two years in a row at Hickstead. They won the prestigious Queen’s Cup – which is probably the biggest and highest accolade in the show jumping sport in Great Britain !

More to add were their wins of CSIO Gijon, Lisbon & Barcelona as well as other wins with horses like Heritage Fortunus – who jumped in Rome, Eindhoven and St. Lo, Rotterdam, Aachen and the list goes on till the Olympics !!

Marion & her husband Miguel have also produced top horses like Special Envoy who went to Nelson Pessoa & his son Rodrigo … Echo Beach who went to Cian O’Connor, Double O Seven who went to Philippe Le Jeune and did the European Championships in Hickstead in 1999, the celebrity Diamond Exchange who went to Jessica Chesney (Kurten) who won the Helsinki & Mechelen Grand Prix and jumped the World Championships in The Hague in 1994. 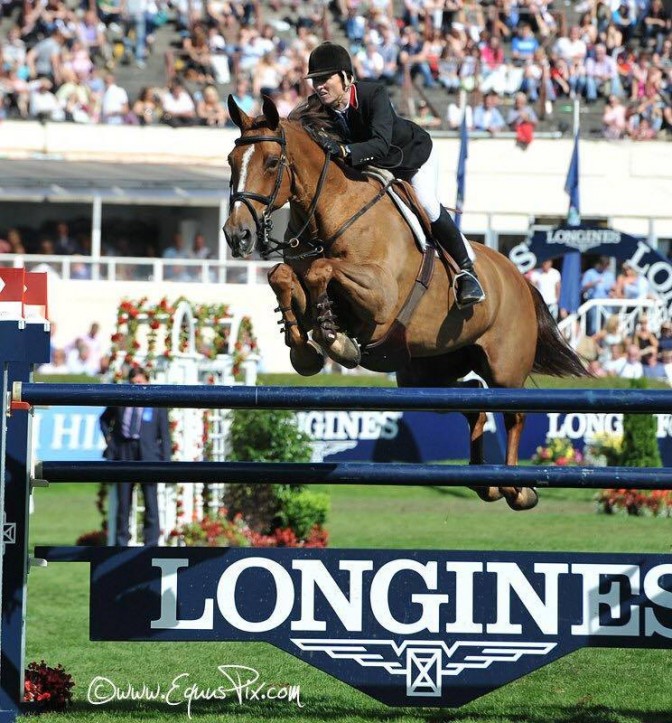 – So you started with ponies and you won a Gold medal back in 1984. Do you think ponies are an essential stage in every child’s life when it comes to riding?

They are very useful, indeed. In Ireland there’s a very strong organization here … The children start riding at the age of 5 and there are competitions here from the age of 6 till 16 ! There are also different levels, so everyone gets to compete at a very early age and I think it’s been proven with the likes of Bertram Allen because there’s a lot of natural horsemanship. We’re definitely a good nation at producing riders and we use this pony system, so something must be good about it !

– Tell us about Flo Jo and the Queen’s Cup at Hickstead.

Flo Jo was a great mare, she wasn’t the biggest or the scopiest horse in the World but she was a super winner all her life, she won at almost every show she went to. She won as a five year old, a six year old and then we started doing some International shows. It was so much fun to have her at Hickstead – the greatest thing about her was that she was so brave and careful with such a strong heart. I mean Hickstead is such a special place and not every horse could jump there. Flo Jo would never look in a hole or any of that – she would just concentrate on her job and nothing else.

She was a real winner, and as a competitor myself I love winning as I find it so hard to just go for a steady clear round. I think it’s just bred into me that I always love to win and that’s exactly why I loved Flo Jo ! 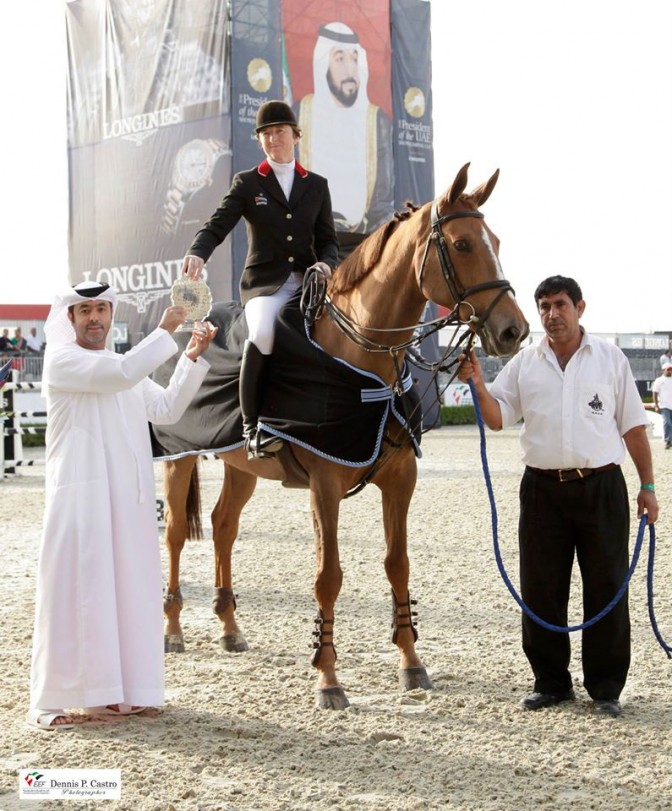 – Why do you think Irish bred horses are always so brave and such fighters?

I think that goes back to the grand parents & great grand parents who were good working horses and good hunters just like in the case of Flo Jo. They were very athletic, brave but actually weren’t such impressive jumpers at home, and it was always difficult to sell an Irish horse at home – you just had to sell them in the ring.

For European horses it’s the other way around, you can get a horse to jump a 2 meter fence backwards and it still looks impressive but take him to the show he could maybe lose the heart. An Irish horse on the other hand, wouldn’t do that at home but could fight for you more in the ring.

I think the downfall for Irish horses was when we used normal Stallions where people based in Europe had access to top sires through fresh semen, frozen semen etc. But I think there are still good mares in Ireland to breed from. Actually, MHS Going Global who is ridden by Greg Broderick is bred by my cousin who refused over 10 Million Euros for that horse and he’s Irish bred from our family line, so at least we’re starting to get back there again !

Yes, Sheikha Maitha Al Maktoum heard so much about Flo Jo and about how great she was. She decided to clone her and she actually has two ! So we’re really excited about that and looking forward to cross them with some of the modern horses like Cornet Obolensky. The clones are now 2 and 3 years old, and the funny thing is when we gave them a little jump, they seem to have Flo Jo’s cheeky character & strong presence. 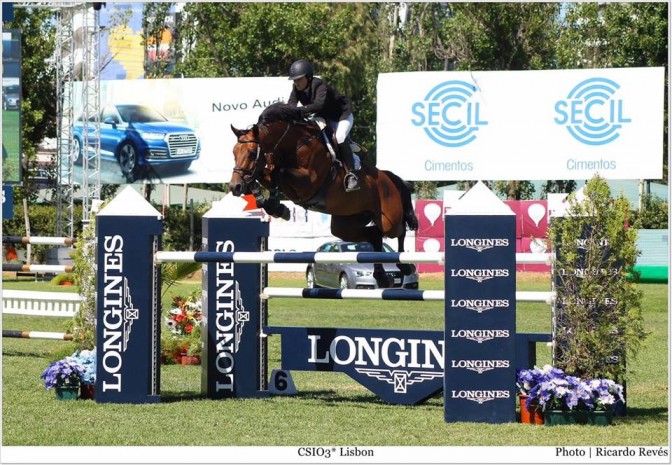 – Can you tell us a bit about your experience at the Olympics in 2004 with the famous Heritage Fortunus and how dramatic it was ?

The build up to the Athens Olympics was great, we started off in La Baule but we felt a bit odd as we were the fifth on the team, and then we went to Rome and we were still the fifth on the team but luckily I had a double clear in the Grand Prix. From there on I produced a clear round in Lucerne, Rotterdam & Aachen CSIOs which led up to the Nation’s Cup in Dublin where we won the Agha Khan Trophy.

After that, we went to the Olympics but I was unlucky in the first round having to retire following Fortunus losing a shoe half-way round and standing on the clip. This was one of the hardest moments in my Show jumping career !!

The second round was 12 hours later ( the first was at 8am and the second at 8pm) so we had enough time with the vet who take the pain away and managed to get him back. So, I jumped in the second round and I had two down but it was quite traumatic because once a horse pulls up lame in the ring, you feel like you don’t even want to go back in there ! It was very dramatic for us in general, especially also that Cian [O’Connor] got and lost his medal, but I’d love to go to another one though ( laughs). 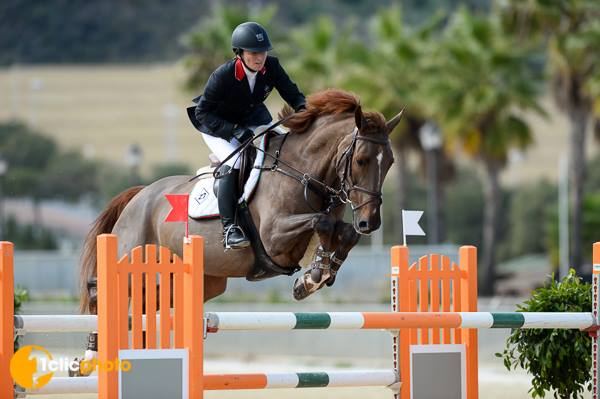 – How do you manage your breeding programme at home ?

I have a really good guy – Brendan Doyle, he takes care of the breeding side. I actually have a very exciting new Stallion : Quite Capitol II (who is out of a full sister to Capitol I and Capitol II) by Guidam De Revel. He actually cost 380,000 Euros as a foal because his breeding was so important and it goes back to the source of all the top Stallions nowadays like Cornet Obolensky and so on. His owner bought him for so much money and he picked up an injury as a 3 – year old but was kept all these years doing nothing till he was 13.

He has one of the best Holstein lines there is, and he could be very useful for Ireland as they could use fresh semen instead of importing frozen semen from Europe as it’s too expensive which not everybody can afford. So hopefully we are lucky and he breeds well, but he definitely has the blood line to do it !

My idea is to use my competition mares like HHS Fortuna for embryos, and then getting them back in the sport and keep them going forward. It’s so important to always breed out of good mares, because even if you get a top Stallion the chances are that they turn out quite normal. Maybe as 3 – year old they look impressive but they just don’t go the whole way if the Dam isn’t good ! 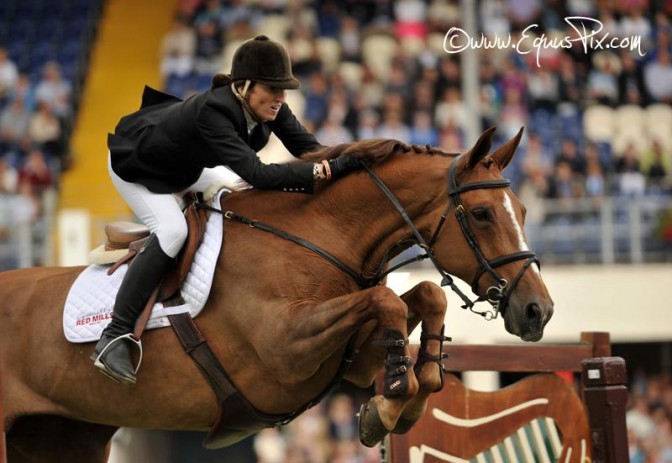 – So, we see you you are doing great in the Emirates. Who are your sponsors there? And what do you think of the shows there?

I’ve been doing the International Tour there for quite a few years now. The standard is good and it brings out a lot in the horses, with more Europeans coming to show. The footing is good too, and it’s really enjoyable. It may be not as competitive as in Europe but it does a great job to prepare the horses for the summer season.

I’m riding mainly for Sheikha Maitha Al Maktoum , and we have some students that ride there as well. The boy we had this year was Jack O’Donohue, and currently on board we also have the talented 16 – year old student named Mikey Pender. Our aim is the European Championships in Millstreet later this year, with Molly Hughes Bravo in Children on Horses, Mikey Pender, Pony Gold medal winner in Juniors and Jack O’Donohue in the Young Rider section. 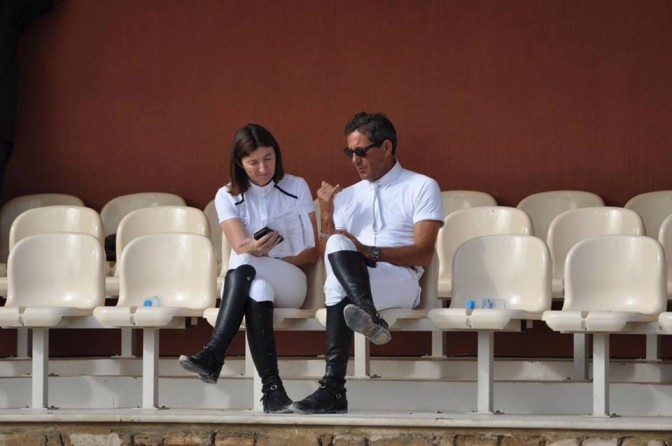 Our mission also is to produce good enough horses for our owner Sheikha Maitha who takes pleasure in seeing her breed becoming successful and making it to the Olympics in 4 years time.

– There’s been plenty of debate surrounding the Olympic seat for Ireland. How do you think that will be decided?

Well, this whole Olympic topic is really important because it’s become so difficult for individual countries to make the team cut for the Olympic qualification. This has made it difficult for the individual rider who may earn an Olympic spot for their country but will not be guaranteed that ride at the Olympics. For Ireland, team participation would have been very valuable to the Nation in respect of the team motivating Nationwide support and allowing access to continued Government funding, so it’s a shame that the Olympic council have restricted the number of Nations taking part. Someone has to look into this as it’s doing a lot of harm to the sport !

As for Ireland and the Olympics this year, it’s so funny everyone is already talking about it and it hasn’t even started ( laughs). I supposed they will make up their mind in July, but first of all you need a sound horse that has good results even though a lot of people are shouting out about their horses but these horses might not be even there for them at the time. It’s just not those two riders that everyone is talking about. It’s a shame because Ireland is capable of supplying 8 riders & horses that could go do well in Rio and they were very unlucky as a Nation not to qualify a team. Second of all, I think they will select the best combination that they can get, you know and also keeping in mind that they have to manage their horses well with keeping enough in the tank and not getting them to do too much before the Games. But, I’m sure they all have a good plan in mind and they will do their best …

Bertram did a fantastic job for getting Ireland a spot, and Denis was unfortunate not to get us a second one !