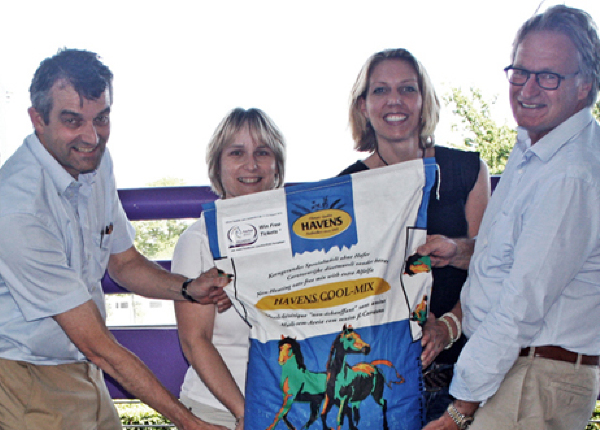 When the FEI European Championships are staged in Aachen from August 11th-23rd in the five disciplines show jumping, dressage, driving, vaulting and reining, the best horses in Europe will also be at the Soers. It goes without sayig that they will be offered the best conditions possible throughout their stay. Great importance is not only placed on ‘luxury’ for the horses in the stables, the feed also has to be top quality. The organisers of the European Championships, the Aachen-Laurensberger Rennverein e. V. (ALRV), are thus delighted that they were able to win over Havens as the official horsefeed supplier for these unique championships. The company from the Netherlands will supply the approx. 720 horses with high-quality pellets and muesli – around the clock and to meet the individual requirements. Because a vaulting horse has different “eating habits” for example compared to a jumping or dressage horse. Here, the feed supplier relies on its expertise, which it has further improved over the course of time. Havens have been the official horsefeed suppliers of the CHIO Aachen since 2004 already, and were also on board in the year 2006 when the FEI World Equestrian Games were held in the imperial city. “After the good experiences we made during the World Equestrian Games in the year 2006 and at the annual CHIO Aachen event, we are very pleased that we are now going to be part of such a fantastic event as the European Championships. This partnership underpins our aim of advancing into becoming the biggest horse feed manufacturer in Europe,” stated Joris Kaanen, CEO of Havens Pferdefutter. In the meantime, the horsefeed manufacturer also lends its name to the “HAVENS Pferdefutter Prize” as the sponsor of this dressage competition, a Grand Prix CDI, which is staged during the World Equestrian Festival. During the FEI European Championships the company is swapping disciplines: On August 16th, the finals of the individual classification in reining will be staged under the same name.

A few weeks before the most important equestrian sport event this year, the head of the company personally dropped off the first of around 70,000 sacks of feed at the Soers.

Frank Kemperman, Chairman of the organisers of the European Championships, the Aachen-Laurensberger Rennverein e. V., was delighted by this gesture and about the continued collaboration: “We have working closely together with the company Havens for years. The participants of the CHIO know that we provide them with top feed products year after year. They can now look forward to the accustomed quality during the European Championships.”

During the FEI European Championships in Aachen around 20,000 kg of feed will be used, including different types of feed with high energy levels, but also herbal muesli and the popular slobber mash.

The Dutch feed manufacturers Havens, whose headquarters are in Maashees, look back on over 150 years of experience, the company was founded in 1845. Havens Pferdefutter sells its products, which are exclusively made out vegetable and 100% natural raw materials, in more than 50 countries worldwide. All of Havens fodder mixes comply with the current GMPs and HACCP guidelines for the production of fodder, which guarantee the high quality of animal feed. The types of feed are regularly tested in a laboratory in England and are ADMR-conform. Havens has been supplying feed to riders at Championships and major shows for years, for example also to the 2014 World Championships gold medal-winning show-jumping team from the Netherlands. Jeroen Dubbeldam (individual gold medallist in show jumping at the 2014 World Championships) has been a customer of the horsefeed manufacturers for over 20 years. The European Championships in Aachen are a further milestone in the company history of Havens.