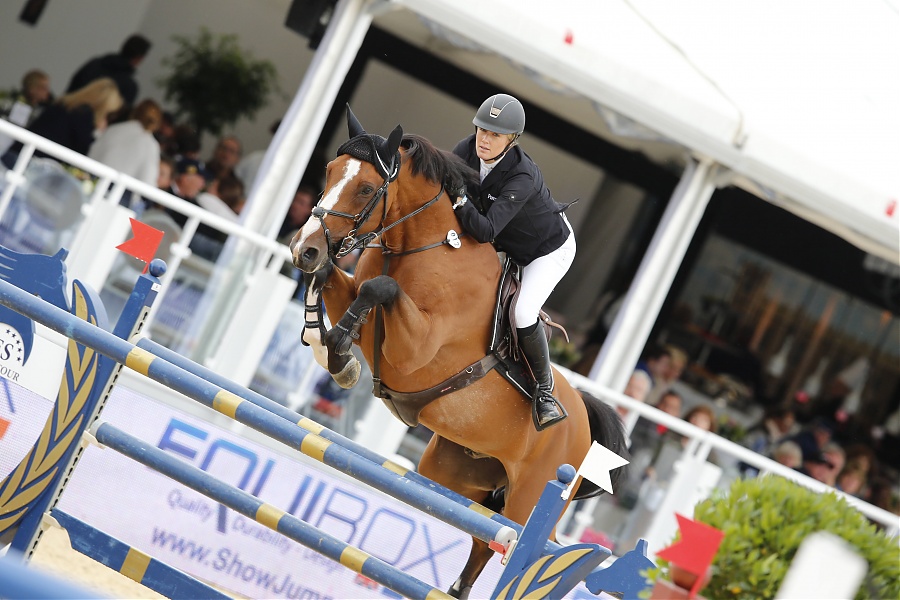 It was the perfect end to the final day of action at the Longines Global Champions Tour of London, as Great Britain’s Laura Renwick (GBR) rode a phenomenal round to take the CSI5* Massimo Dutti Trophy in front of a passionate home crowd. The young Italian Emanuele Bianchi took second place, just sixth tenths of a second off the win with his stunning bay stallion Isco de Amoranda. Third place went to Ireland’s Denis Lynch on his twelve year old bay gelding All Star 5, who lead the jump-off for the majority of the round.

The first round caused many challenges, with many horses spooking upon entering the arena and looking fresh in the cooler weather. The second part of the double was problematic for a few, with the poles tumbling left, right and centre as the world’s best took on the 1,50m course.

However, despite the tricky first round, fourteen world class combinations went clear and through to the jump-off. With a new set up, there was everything to play for as riders such as Simon Delestre (FRA), Gregory Wathelet (BEL), Kevin Staut (FRA), Daniel Deusser (GER), Henrik von Eckermann (SWE), Jane Richard Philips (SUI) and Meredith Michaels-Beerbaum (GER) took to the arena.

Although the course rode fairly smoothly, there was a long gallop to the second of the fences on the related distance, encouraging a quick time but also throwing questions to the world class combinations, with the Massimo Dutti fence the final challenge. The temptation to gallop to the last was strong, but with the water tray and final spread, precision and careful riding were in order for those to go clear.

Denis Lynch (IRL) put in a stunning round, and held the lead for most of the jump-off, watching from the warm up as those following put forward their best shot. Luciana Diniz (POR) and Winningmood rode a strong round, with Luciana clearly delighted with her phenomenal grey stallion who jumped beautifully and crossed the line in sixth place.

Christian Ahlmann showcased his usual smooth and slick riding, with great turns on his agile stallion Colorit, riding home in 38.29s and in a well deserved fourth place. He was quickly followed by Emanuele Bianchi and Isco de Amoranda who managed to shave time by galloping to the first, and despite drifting off the line was able to turn his horse in the air before he’d landed, and coming home with a strong second place.

Laura Renwick (GBR) was one of the final riders to enter the purpose built sand arena, and the crowd hushed in anticipation as their home rider took to the course. The big striding nine year old Bintang II covered the ground beautifully between the fences, and Laura rode an intelligent and careful round to come home in an absolutely superb time of 37.32, half a second ahead of second place man Emanuele Bianchi (ITA).

Laura commented on her win: “It means everything to me, we’ve had this horse since he was very young; he’s a real talent and today he showed just how much talent he has. He’s not a speed horse but he has a really big stride, which suited the run to the last.

The Tour now turns to home, and Valkenswaard, where the spectacular new Tops International Arena is set to be unveiled to the world ahead of the 12th leg of the championship race. With Scott Brash (GBR) and Luciana Diniz (POR) in close competition at the top of the ranking battle, the stage is set as we head towards the final four rounds of the 2015 season.