Ireland’s Greg Broderick smashed headlines with his top class performances at the Furusiyya FEI Nations Cup in Lummen & La Baule in May last year and went on the same cracking streak with a double clear in St. Gallen the month after. He then got a wild card invitation at the Longines Global Champions Tour Grand Prix in Estoril where they pulled off an amazing triple clear rounds to end in third place.

Broderick and his Irish Sport horse MHS Going Global carried their torch of success to the Agha Khan in Dublin and jumped a double clear and helped Ireland to victory. After a dream year in 2015, they came back this year in St. Gallen with yet again a double clear in the Nations Cup and helped Ireland to win again. This followed up on Sunday’s Grand Prix with a double clear to finish 4th as the highest placed combination among the Irish – so the team manager spoke and selected Broderick for the Rio Olympics after much dilemma surrounding who will be the sole ambassador for Ireland in August.

He is based at Ballypatrick Stables in County Tipperary where he operates a sports, breeding and dealing yard on world class level. 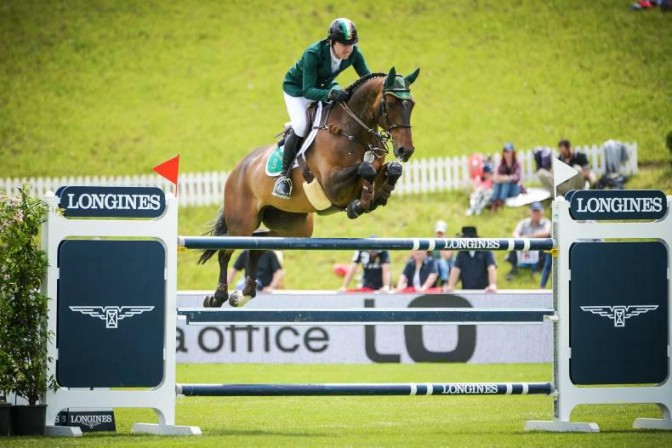 Can you give us a brief about your family and about their interest in racehorses?

My dad was big in fox-hunting, in fact he was the Chairman of the local hunt in our area for 12 years. So, I did a lot of fox-hunting in my younger years and my dad used to train point-to-point horses. We had a very good racehorse called Saracen – he won a lot of big races, so that was my initial introduction to horses. It wasn’t necessarily from a show jumping background, but I did a lot of hunting & hunt-chasing which took me eventually to show jumping.

Take us through your show jumping junior stage up until you entered the European Championships.

I remember when I went to the Dublin Horse Show when I was 18 years old with a horse called Ballypatrick Rebel. I rode him in the equitation class, it was my first time riding there and we won ! I then got a new horse called Quarrier Z who did the young riders’ European Championships, we also did a national circuit at home and he was very consistent in the 1m50 level and that was when I competed him in the European Championships.

At that time Shane Breen was my neighbour and trainer, before he moved to Hickstead with Michael Quirke who also helped me a lot with the flat work and taught me how to work horses properly.

How involved are you with the business part of the sport?

We have a big breeding operation at my home place and I will be the 5th generation to move into my family home ! We have a substantial farm and my sister looks after the breeding operation – we have 30 foals this year, and we built a state-of-the-art stock room and a lab with special temperature controls for embryos.

We have several international mares from America, Canada and some from Kevin Badminton, Shane Breen and Bertram Allen. We also do a lot with young horses, we buy and sell a lot. In fact in 2012, in Lanaken I won the World Breeding Championships with Arraghbeg Clover and also in 2014 in the Dublin Horse Show, which is obviously a very big show in Ireland, I won the 4,5 and 6 year old championships which was the first time ever in history that the same rider wins all 3 classes.

We have around 40 working horses all year round and we do a lot of buying & selling not just competing. 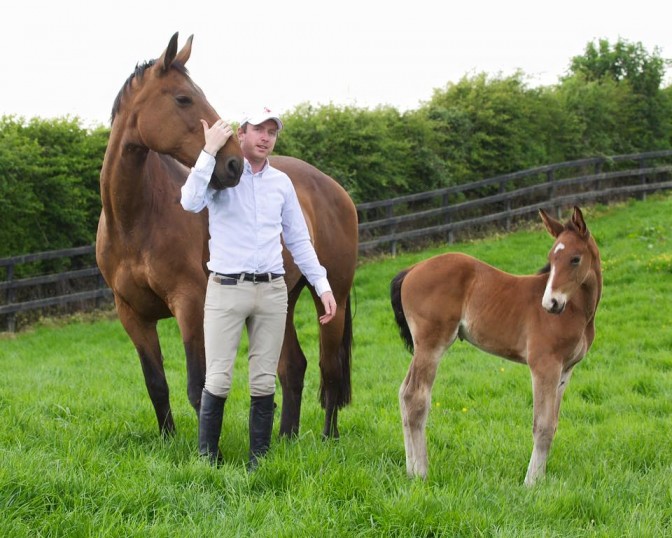 Tell us the story of your Olympic horse MHS Going Global. He was originally sent to you to ride back in 2011 correct ?

He was sent to me by the breeder Tom Brennan as a five year old, basically to get an assessment. He wanted me to ride him for 6 weeks and to see exactly what he learned, and I immediately felt he was a super star.

I had a good friend of mine Lee Kruger who was over for the Dublin Horse Show at that time and she had some young horses competing, so I told her that I had a very special horse at the stable and that she should come with her husband Paul and have a look. So she came the Monday after Dublin and we jumped the horse in my sand arena – she fell in love with him and we bought him together … MHS Going Global has been here since then ! 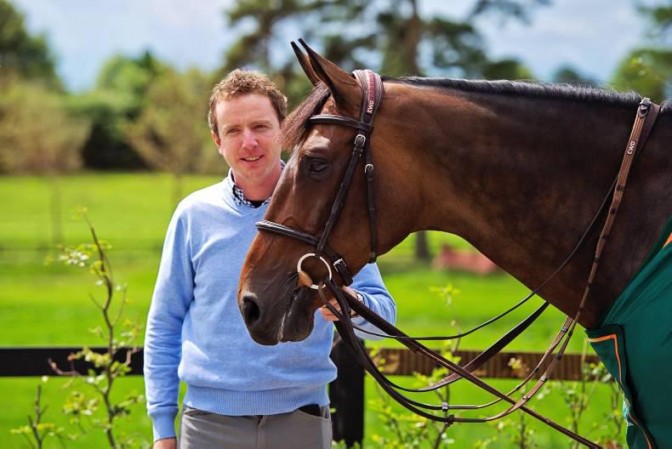 With all the spotlight he got in Estoril, La Baule, St. Gallen and even Aachen the owners rejected crazy offers for him. Was all this to preserve him for Ireland as a National value till he retires or is it only for the Olympic Games?

The Olympics was certainly a cause, but it wasn’t the sole reason to keep him. When Lee bought the horse with me, she wanted to have a horse at the highest level, and last year was a dream year for all of us – we won the Agha Khan in Dublin where the atmosphere was fantastic especially for us Irish riders, so to jump a double clear and win the Nations Cup was truly a dream. Now the Olympics is the next chapter, so hopefully it gets better and better.

If all goes well in Rio, we’ll be going to Spruce Meadows for the Masters and selling him is not on the agenda at the moment …

How do you see the format for the team selection per nation for the Olympics? Don’t you think that the qualifications have become more and more difficult for a country to be represented by a team or even an individual?

It certainly is, especially in Europe. When you see the likes of Belgium for example, who won the Furusiyya FEI Nations Cup final in Barcelona last year and have so many fantastic riders – so the fact that they are not in the Olympics is very unfair. Of course, the same case applies to Ireland – we have 4 strong riders with 4 top horses, so it’s a shame that we didn’t make it as a team for Rio.

And what do you think about the fact that earning a spot for your country doesn’t necessarily guarantee you that place? As in the case of Bertram Allen …

It’s certainly a controversial topic, but it has happened with Ireland before when the person who won the spot didn’t go. I do feel sorry for Bertram, I definitely didn’t set out to take the spot from him, he’s my friend and if he was going to the Olympics I would have been standing behind him 200% and I hope he wishes me all the best. But looking at the facts & figures, my horse jumped unbelievably well in St. Gallen and that was when I got the spot, so hopefully we get there and we win a medal ! 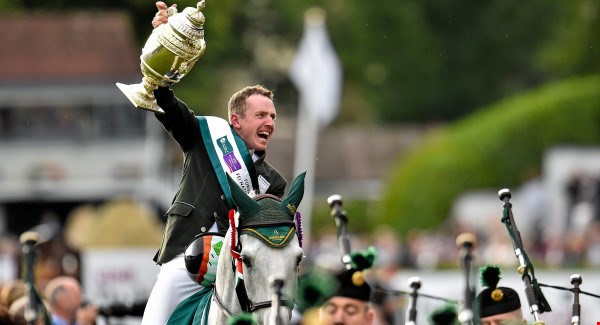 Tell us what was team manager Robert Splaine’s strategy for the last couple of months to select the best contender to represent Ireland at the Olympics?

It was put down to the criteria of results for the last year and a half  in Nations Cup and 5-star Grand Prix classes. Last year, Going Global was the most consistent – he jumped clear rounds in Lummen, La Baule, Dublin, Estoril and St. Gallen, so his record was second to none at only 9 years of age. Since last year we did 7 team events and we were the best combination on five of them, so it was very hard to surpass that.

How did you receive the news?

I got a phone call from Robert Splaine on a wednesday morning to inform me that they had selected Going Global for the Games. I do think that the horse and myself can do a great job – he’s fresh, he’s well and in great form. I also think that he’s a true championship horse, he’s scopey and he has the heart for the big occasion. 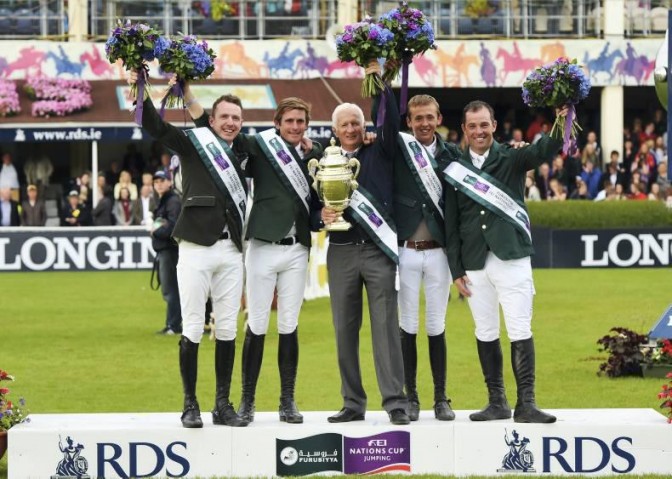 And What is your plan from now on till the Olympics in August?

I have a few shows to choose from, but I have to finalize it with Robert as there will be some fine tuning at shows but I won’t be over jumping him between now and Rio. It’s possible that we’ll be doing another Nations Cup but it’s not probable. I also want to say that all four riders that were short-listed for the Olympic Games could have done so well there – Cian, Denis and Bertram are obviously three top riders and have three top horses so we all could have gotten a medal.

What is your opinion regarding the idea being proposed of having three riders on teams instead of four? Some say it will open up seats for other Nations that don’t have teams at all competing at the Olympics.

I suppose its for-and-against, as the old saying ” Old habits die hard” and the show jumping community is certainly used to having four riders on a team which does give a chance for new combinations to break into the team, like I did with Going Global last year when I went to California for 6 weeks and came back I was given the opportunity to ride on the team, and jumped clear rounds thankfully. Personally, I think having four on the team is a better system than having three but I suppose having three riders and extra teams has its Pros as well – so it’s a matter of for-and-against … 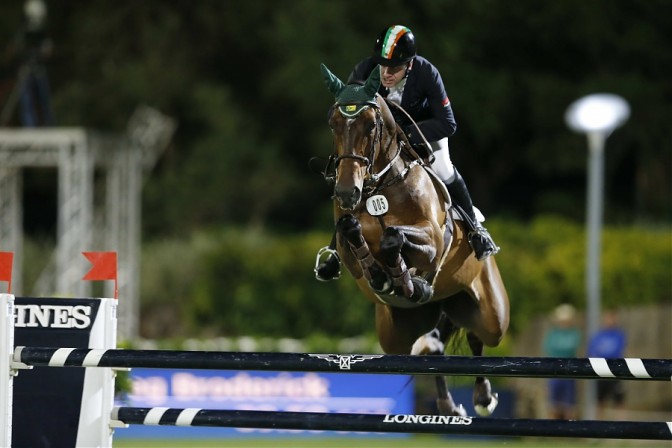