According to the website The Chronicle of the Horse :

On the afternoon of June 3, grand prix rider and show jumping professional Aaron Vale was riding horses and teaching a student at his barn in Williston, Fla., when he noticed something odd near his home.

“Originally I thought it was dust, because we were mowing the paddock next to the house,” Vale said.

When the dust didn’t subside, Vale drove up to the house and discovered it was on fire. 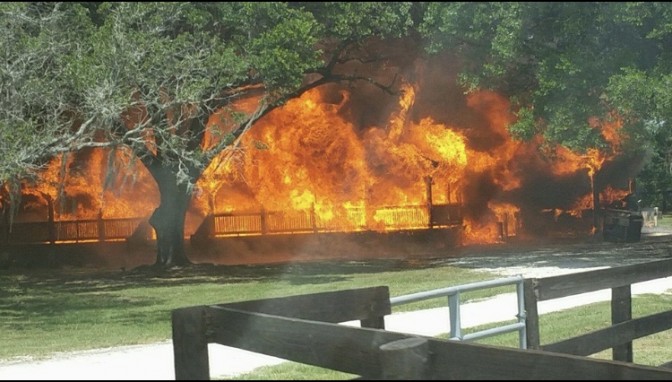 “I turned on my cellphone flashlight,” he said. “You couldn’t see six inches, the smoke was so thick. There was no way I could go in.”

In an hour, the fire, which started in the kitchen, ended up completely destroying the home. Firefighters thought the slow smoldering start pointed to possibly the refrigerator as the cause, rather than the gas oven, which would likely have exploded, but Vale still doesn’t know for sure what started the fire.

Aaron, his wife Mallory and their daughter Kinser lost everything, including tack, riding equipment and business records, as well as their beloved dog, Roo. All the Vales have left of their personal belongings were in a camper, which they were able to move away from the house. The camper contained about half a week’s supply of show clothes. Even Mallory’s car, which was parked next to the house, burned.

“It is just mind boggling,” Aaron said. “You just run the list through your head. It is just countless and endless. It is stuff that you collect over a lifetime.”

Longtime family client Sharon Fuller van der Walde set up a GoFundMe for the Vales on June 5 to immediately help them while they wait for the insurance claim to process. Within one day, it has raised more than $34,000, with a goal of $50,000.

“Unbelievable,” Aaron said. “The horse community is a small one, but a supportive one. You know, it means the world to me.”

He said he would continue his show schedule despite the fire.

“It is going to take a while to get all the insurance and what-not sorted out,” said Aaron. “So we might as well just stay in our camper and work from the horse show and get on with life.”

“Horses will teach you about this,” wrote Mallory on the GoFundMe page. “They will teach you that one moment you are winning the biggest class you can imagine and the next class you are being thrown into the ground. I think the horse community understands this, and that is why we all pull together. We move forward. We look to win our next class. Show jumping has so many ups and downs and then so does life.”

Report by : Laura Lemon/ The Chronicle of the Horse