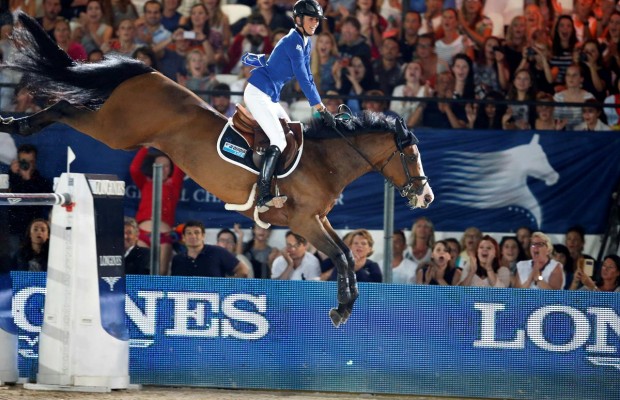 Pénélope’s army of young fans were ecstatic as she powered across the finish line in an eye-popping 36.86, almost a full second ahead of Swedish champion Rolf-Göran Bengtsson on the extraordinary 16 year old stallion Casall Ask.

It was a night of great stories under the multi-coloured lights of the French Riviera arena. In the overall championship race Luciana Diniz has dramatically extended her lead in the ranking after finishing third on Fit For Fun.

Luciana is now on 160 points, a full 50 points ahead of her nearest rival Pius Schwizer on 110 points and Scott Brash on 105 points. Pius, riding Armani The Gun, retired in the Grand Prix and Scott uncharacteristically finished on 8 faults in the first round on Hello M’Lady. Rolf has jumped up the ranking from 10th to 4th place and is on 99 points putting him in serious contention for the championship.

With speed and precision reaching new heights in the Grand Prix jump-off, the winner walked away with 40 crucial ranking points and 99,000 euros for first place.

The championship circuit next heads to Monte-Carlo, Monaco for Leg 7 as the series powers towards its halfway point.