Ellen DeGeneres is letting readers into her homes past and present—seven of them—with her new book titled, simply, Home. That DeGeneres has personally decorated seven properties worthy of a coffee-table book is impressive, but consider that she has actually bought and renovated 15 homes in the past 25 years and the extent of her design prowess becomes abundantly clear. As she writes in her book: “I’m pretty efficient.”

The multi-hyphenate comedian and talk show host has emerged as a serious design authority of late: launching her lifestyle collection ED, hosting Ellen’s Design Challenge, as well as selling a line on QVC. “I think I wanted to be an interior designer when I was 13,” she says. Here, we have an exclusive preview of the horse ranch she renovated and lived in with her wife, Portia de Rossi.

“Portia and I bought a 26-acre horse ranch just north of Los Angeles. Why? Why not?! It had a pretty incredible past. It was built by William Powell in the ’20s as an estate—it then became a monastery, then a rehab center, and then the horses moved in (much to Portia’s delight). It was an incredible piece of property, with eight individual cabins, several barns, and, of course, horse stables. There were also these magnificent, giant boulders scattered about. The whole place looked like it belonged on another planet.

“When we got it, the property had been a little neglected. It was a professional horse facility (I think parts of the movie Seabiscuit were filmed there), and the outbuildings that were occupied were really just basic offices. The boulders didn’t need to be touched—which is good because, well, they were boulders. But the rest of it needed a revamp, to put it lightly. Everyone thought it would take me (many) years to get it in shape, but it actually took me 12 short months. Want me to decorate your house? I’m pretty efficient. (We’ll talk about my fee at another time.)

“The first things to go were these signs that were all over the property: ‘Don’t even think about parking there.’ Wouldn’t dream of it. And then I moved on to the cabins and the barns. I approached it like I was designing and decorating 10 different homes, giving every cabin and space its own unique identity—had I not, I think it would have started to feel a bit like a hotel. But that was a unique challenge, too, because while I wasn’t fixated on making a whole ‘house’ that hangs together as one, I also wanted it all to feel like home. The only real theme that stuck was comfort.

“We lived in every cabin as we decorated and restored them one by one. When we finished one, we’d move in and begin work on the next. The first cabin we lived in didn’t have a kitchen, a bathtub, or any other amenities to speak of. But it was fun. Number 8 was the biggest cabin. For no particular reason, we spent most of our nights in Number 5, which had a screened porch and a view of an epic rock. (It really was epic.) Eventually, I redid the Art Barn, which we used as a dining room for bigger parties. There was the Romantic Barn, where Portia and I celebrated our first wedding anniversary. (I surprised her with some factory lights from the early 1900s that she had seen and loved, hence the name.)

“The last thing I tackled was Portia’s Barn, which I learned should not be decorated at all. Barns are dirty. Nobody wants to dust 16 ornately framed paintings every week. But there were so many cool sculptures and art pieces that I loved in those barns and cabins; I’ve since moved a lot of them to other houses and even to my office and dressing room at work. My staff isn’t allowed to touch anything, but they are free to admire from afar. While we lived on the ranch, we tried to make use of the entire property so we could enjoy the outdoors. We put in a tennis court and put up a badminton net. It was really fun, especially when I won. And if we didn’t have guests over we could always play doubles with the coyotes and skunks that roamed the property. They were a joy. That is one thing I really loved about the ranch—we were so close to Los Angeles but able to feel secluded in a natural wonderland. Portia and I would bring out big picnic blankets and just lay around, surrounded  by wildflowers and huge oak trees. When we were there instead of in the city, this really felt like our home away from home. I have to say, the ranch has been one of my favorite projects to date.” 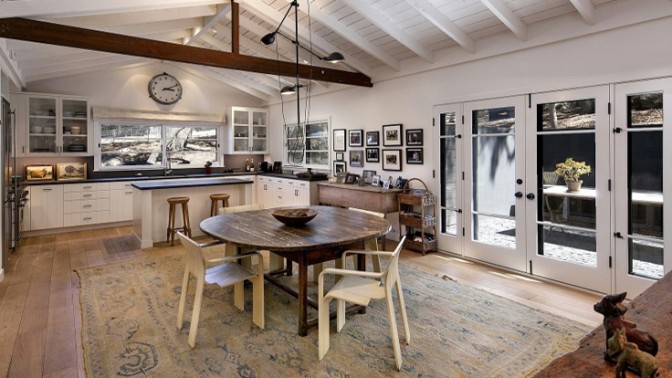