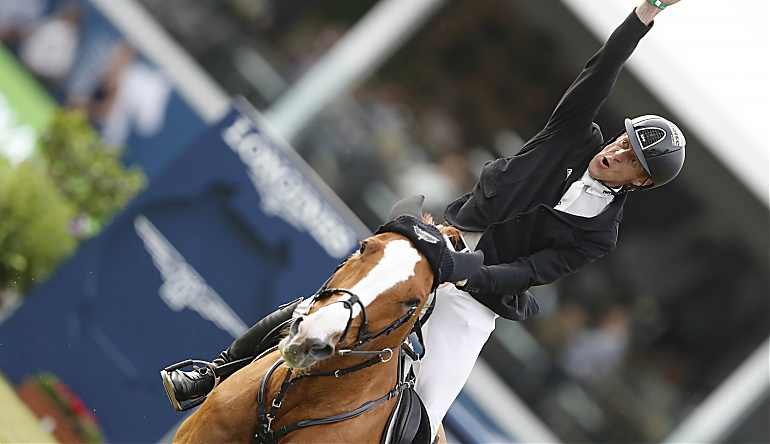 It was standing room only at the stunning Spanish round of the Longines Global Champions Tour as Marcus Ehning (GER) took a sensational win with the 13 year old chestnut gelding Pret a Tout. In front of packed passionate crowds, an eight rider jump off had spectators on the edge of their seats right until the final fence as last combination to go, Marcus and Pret a Tout, galloped the course in a stunning display of skill and speed.

Following his win, Marcus praised his phenomenal horse Pret a Tout, saying: “I knew he was a good horse, but I didn’t expect him to be that good or that quick! [He] showed all the experience and all his quality and I’m really happy to win today.” Marcus also spoke of the momentous and ground-breaking impact of the Global Champions Tour on improving the sport of show jumping internationally: “It is one of the biggest improvements in the sport in the last 20 years for all of show jumping worldwide – for other shows it’s a big goal to come close to the Global Tour. I think over the years you could see how the sport improved, and what kind of countries we have now with all the stages. It’s amazing what Jan did and I think for the sport it could not be something better.”

LGCT Ranking leader Christian Alhmann (GER) spoke of the world class action on show today: “It was an unbelievable class and an unbelievable jump off. It was super fast and it was really nice to watch.”

To the delight of the home crowd, who packed the grandstands to watch the action unfold and cheered passionately throughout the competition, local rider Eduardo Alaverz Aznar (ESP) took home the bronze medal. Speaking of what it mean to take the podium on home turf, Eduardo said: “It’s really special to be on the podium in my city and in my club where I have been riding for so many years.” Abdullah Al Sharbatly (KSA) and his LGCT Grand Prix of Shanghai winning horse, the 16 year old Tobalio, took the Silver medal, and were the ones to beat after setting the initial early pace as the first combination into the jump off.

Only hours before his sell-out concert in Madrid Bruce Springsteen spent time at the show with his wife Patti watching their daughter Jessica Springsteen compete in the Longines Global Champions Tour Grand Prix of Madrid presented by Caixa Bank. The Boss joined guests to watch the high calibre competition before heading off to perform in front of tens of thousands of fans in the City as part of his “The River” tour.

The Infanta Elena, a member of the Spanish Royal Family, was also a guest at the elegant and historic Club de Campo Villa de Madrid for the show jumping extravaganza featuring the world’s top riders. Other guests included Friends creator James Burrows who saw his daughter, the talented young American rider Paris Sellon, jump clear in the Grand Prix first round on Adare.

Against the stunning Spanish setting, the Longines Global Champions Tour Grand Prix of Madrid presented by CaixaBank got underway with a full field of 50 international riders in action for round six of the Tour Championship. Course designer, Guilherme Nogueira, who will be building the show jumping courses for the 2016 Rio Olympics, set a fair but challenging Grand Prix, set to test the best in the world. Big names included 2015 LGCT Champion of Champions and last year’s LGCT Grand Prix of Madrid winner, Luciana Diniz, who returned to compete with her LGCT Grand Prix of Doha winning horse Fit For Fun. Other key combinations were LGCT Ranking leader Christian Ahlmann (GER) who rode Taloubet Z, Scott Brash (GBR) and Hello Guv’Nor and John Whitaker (GBR) with his formidable stallion Argento.

The initial round proved tough, however first rider in Paris Sellon (USA) and Adare went clear, setting the pace for the rest of the international field. Compatriot Georgina Bloomberg (USA) lead the way for most of round one after a beautiful showcase of show jumping with her mare Lilli. 18 riders went through, including Bertram Allen (IRL) with Hector van d’Abdijhoeve, Kevin Staut (FRA) with For Joy van’t Zorgvliet HDC and Gregory Wathelet (BEL) with Citizenguard Taalex. LGCT Ranking leader Christian Alhmann (GER) had an unlucky fence down, but pushed to the final fences, just squeezing him into the top 18 and through to the next round.

The second round was met with further tests for the riders who jumped clear. Harrie Smolders (NED) with Don VHP, Georgina Bloomberg (USA), and John Whitaker – who had an unusual time fault – just missed out on the jump off which saw eight riders through, including Roger-Yves Bost (FRA) with Qoud’Coeur de la Loge, Rolf-Göran Bengtsson (SWE) with Unita Ask, Meredith Michaels-Beerbaum (GER) with Fibonacci 17 and Olivier Philippaerts (BEL) with H&M Legend Of Love.

Abdullah Al Sharbatly (KSA) was first to go, setting the pace at an impressive 36.08s. He put the pressure on the rest of the field who were unable to beat his time as the final stages played out. Each round had the crowd on the edge of their seats as they cheered the horses and riders on. But it was the last combination to go who triumphed, and with his foot to the floor Marcus Ehning (GER) galloped the course, pushing at every opportunity but keeping Pret a Tout careful over the full 1.60m height verticals and intimidating oxers. A flat out gallop to the last, and the pair finished in a blistering 35.17s, with an ecstatic Marcus celebrating as he passed the cheering crowd.

Tomorrow the Global Champions League of Madrid will kick off at 18:00 local time, with the twelve teams battling it out for the top spot in the 6th round of the Championship.

Jan Tops, Founder and President of Longines Global Champions Tour: “It was top sport. The riders went faster and faster and it’s the dream for every organiser and every sport to keep the excitement until the last. What Marcus did today was very slick – in the jump off his horse is naturally very fast; he stayed good to the end and he was the deserved winner today. Abdullah Al Sharbatly did very well, he had a great result, and we are very pleased for Eduardo – he’s not so much in our events because of the ranking, but I know he is a great rider, he comes from a great horse family. His father was also a top rider, so it’s nice to see the next generation do well particularly in his home. Every week Christian is there – he’s like a German machine, like a Mercedes! It doesn’t matter which horse he has, every horse goes great. He’s far in the lead and it will take some beating.”

Alvaro Arrieta Konyay, CEO Oxer Sport: “First of all I want to congratulate all four riders at the table for a fantastic performance. We’re very happy. This is the eighth year that we organise the Longines Global Champions Tour of Madrid. This one is special as, like last year, we have a Spanish rider on the podium which is very important for the City. Thanks to Longines, thanks to all our sponsors and CaixaBank and of course thanks to the Tour, and thanks to my friend Jan. It is his confidence and trust in my company to organise some legs of the Tour – six weeks ago we organised Mexico and now Madrid in this fantastic facility. So I’m happy for the nice sport we have seen.”

Christian Ahlmann, LGCT Ranking Leader: “I had an unlucky rail, Taloubet jumped really good. On the turn to the triple bar I saw the chance and thought ‘ok I need to take a risk’. So I took the short way to the vertical on the second to last. I was really lucky to make it, I was just in the top 18 through to the second round where Taloubet did very very well. I was really happy with him as it was the first show after the World Cup Finals and he did a great job. I want to congratulate the whole podium, especially Marcus as it was an unbelievable class and an unbelievable jump off. It was super fast and it was really nice to watch. Thank you to the organiser and team for this wonderful show. Thank you to the sponsors and hopefully you’ll see us next year again!”

Marcus Ehning, LGCT Grand Prix of Madrid Gold Medallist: “I’m very happy to win here today. For me it’s one of the nicest Globals that we have – it’s a fantastic atmosphere with unbelievable conditions here. Two years ago I came very close, but now I’m happy to win here in Madrid, it’s a traditional show. I’ve had my horse just since January – I knew he was a good horse, but I didn’t expect him to be that good or that quick. I was very close in Hamburg to win the Global. In the jump off I saw Sharbatly, and I saw that he really put us under pressure, but in the end my horse showed all the experience and all his quality and I’m really happy to win today. For us, [the Global Champions Tour] is one of the biggest improvements in the sport for the last 20 years. It’s not only for the Global Tour, but all for worldwide show jumping – for other shows it’s a big goal to come close to the Global Tour. I think over the years you could see how the sport improved, and what kind of countries we have now with all the stages. It’s amazing what Jan did and I think for the sport it could not be something better.”

Abdullah Al Sharbatly, LGCT Grand Prix of Madrid Silver Medallist: “I would like to thank everyone and all the organisers, especially our friend Jan Tops, our sponsor Longines and everyone who arranged this amazing event. It’s amazing to have the Global Tour – it’s super for the riders, for the owners and everyone. It’s improved the sport. I’m really happy with my horse – he won LGCT Shanghai and was second here. We were first to go in the jump off, which is always a difficult situation when you start at the beginning. But I set a good time without taking a risk before my colleague Marcus did a good round and beat my time – I was really happy for him as he deserved to win today. My horse is 16 now, but really in great health, and I hope he’s going to jump a couple more years.”

Eduardo Alaverz Aznar, LGCT Grand Prix of Madrid Bronze Medallist: “It’s really special to be on the podium in my city and in my club where I have been riding for so many years. I was very pleased with my horse, it was the first time he did three rounds and the first time I really tried in the jump off with him. The result is there – I went close to them but not fast enough!”