Edwina Tops-Alexander (AUS) and her feisty 13 year old bay mare Lintea Tequila rode a stunning class to claim the top spot in the 2016 Longines Global Champions Tour Grand Prix of Miami Beach. Set against the backdrop of the iconic Miami Beach, equestrian enthusiasts and beach-goers packed the grandstand and lined the arena to watch the stars of show jumping battle it out as the 2016 season got underway. 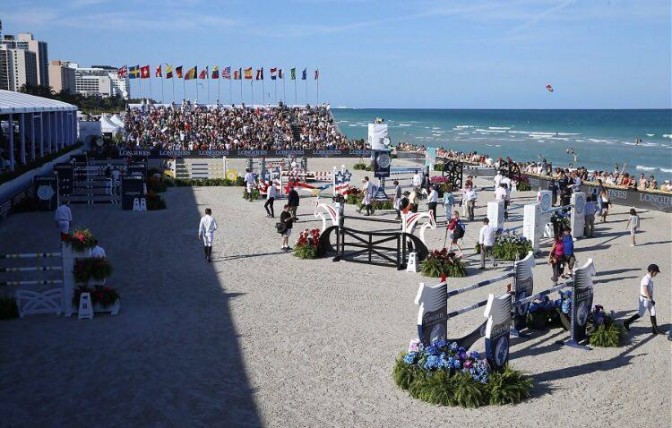 The 50 strong class fielded eight of the world’s top ten riders, promising a spectacular start to the Tour circuit. Italy’s Uliano Vezzani created a challenging first round course, set to test the very best in the sport. Questions were asked throughout, with riders caught out across the course. Despite the challenges, a total of 17 clears went through to the second round, with Kevin Staut (FRA) the fastest of those with four penalties rounding out the top 18. Bassem Hassan Mohammed (QAT), Jerome Guery (BEL), Doda de Miranda (BRA), Jane Richard Philips (SUI), Emanuele Gaudiano (ITA), John Whitaker (GBR) and Jos Verlooy (BEL) were just some of the riders through, with David Will (GER) continuing his fine form with his CSI5* class winning horse Mic Mac du Tillard.

First to go Kevin Staut and Elky van het Indihof HDC jumped clear and in an impressive time of 59.69s. Christian Ahlmann (GER) and Epleaser van’t Heike were the first to jump double clear in the intense second round, wriggling out of trouble to the last fence to clear the full 1.60m height fence. Sheikh Ali Bin Khalid Al Thani (QAT) and First Devision were soon to join Christian after a brilliant round, ensuring an exciting jump-off would ensue. Maikel van der Vleuten and VDL Groep Arera C showcased a classy round to earn their place in the final, bringing the tally to three.

The rest of the field took their chances, with the square oxers and final fence causing a few problems for the world’s top combinations. Home favourite Kent Farrington (USA) and Voyeur were caught out by the triple combination, while experienced duo John Whitaker (GBR) and Argento, and young star Jos Verlooy (BEL) were also unable to make it into the jump-off.

If there had been a roof it would have been sent sky-high as the crowd went wild watching home rider McLain Ward (USA) and his beautiful bay 10 year old mare HH Azur jump a cool and impressive clear. He was joined by compatriot Georgina Bloomberg (USA) with her bay mare Lilli after a beautifully ridden round much to the delight of the watching spectators. Finally Edwina Tops-Alexander and Lintea Tequila who had looked on consistently good form throughout made it six for the nail-biting final round.

The jump-off was a fast paced course, with plenty of gallops, including a flat out race to the last which consisted of imposing planks. First to go Christian Ahlmann (GER) went a steady clear in 37.38s – a shake of his head as he exited the ring confirmed the potential for more speed, and the next competitors readied themselves to do battle for the final top positions. 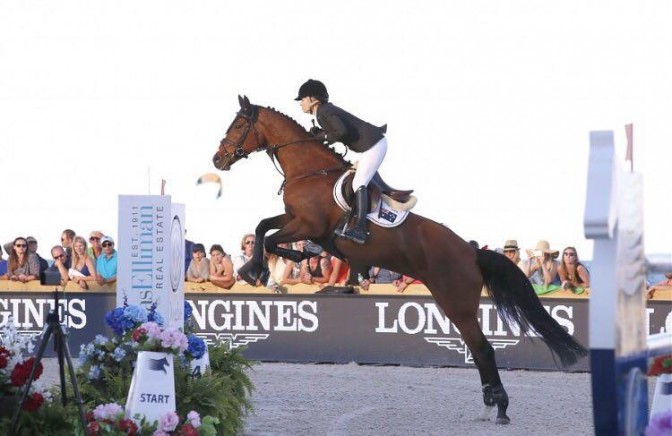 Sheikh Ali Bin Khalid Al Thani (QAT) put in another excellent round with First Devision, however had one down, crossing the line in 37.10s which would have put him straight into the lead. Maikel van der Vleuten (NED) was also caught out by a rail midway through the course, as was local rider Georgina Bloomberg who despite the four faults rode a stunning round with her horse Lilli.

McLain Ward’s mare HH Azur had a ground covering stride, eating up the distances between fences, and McLain rode a clever round to cross the line clear in 35.78s – a full two seconds faster than former leader Christian. But it was last to go Edwina Tops-Alexander (AUS) and her brilliant plucky mare Lintea Tequila who jumped their hearts out against the backdrop of the stunning Miami Beach. Light on her feet and quick around the corners Lintea Tequila showed exactly what she was capable of with Edwina riding her perfectly around the challenging course to maximise the little horse’s agility and speed. They crossed the line a full second ahead of McLain in 34.59s, as the crowd erupted from the grandstands and along the packed edge of the arena. 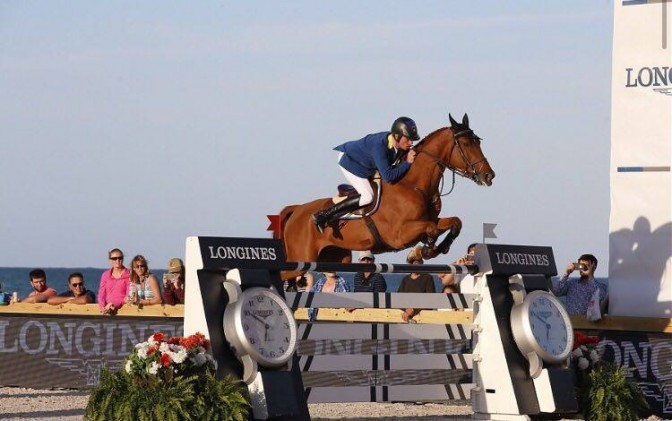 Edwina now leads the 2016 LGCT rankings, as the Tour looks ahead to event two, the debut for Mexico City.

Jan Tops, Longines Global Champions Tour Founder and President: “[It was an] amazing start. You don’t think when you walk the course that there would be so many clears but I think the whole circumstances helped – the footing, the horses feel good in this weather – I think all the circumstances are great. We have a unique sport that’s totally different than our classical arenas which is what makes it so unique for this show. This is what the Tour is about. We are very diverse. This week we have a small arena but you also see big horses like the one McLain or Christian have perform well in these arenas. Next week we have a big grass arena. We are jumping during the day and during the night – we have all these different elements and that is why I think the Tour is so special.

“Tomorrow is another exciting day as it’s the kick off of the new Global Champions League. I’m very excited about that. It’s a new project for our sport and I have a lot of faith in what is happening with the future. The years to come are going to be very exciting.”

Edwina Tops-Alexander (AUS), gold medallist: “I’m obviously really happy. It’s been a while since I’ve won a Global Tour Grand Prix. [Lintea Tequila] just felt amazing. The first round I had a great feeling, everything went really smooth. She was very fresh on the first day and feeling really good – I was a little worried she was maybe a little too fresh but I think it paid off leaving her off yesterday. The second round was a lot bigger and suited a different type of horse. I was in a good position being last to go and I had the chance to watch everyone – that’s always an advantage – and I just went as fast as I could. I was a little lucky on the Miami fence as she fell a lot to the left but it actually helped me in the end. Uliano did again an amazing job so congratulations. It’s not easy to build when you have so many good horses and good riders – to have six coming back for the jump-off was a great effort. I think the ground is absolutely amazing and I think all the horses have been jumping great. They travel over it very easily and their stride gets bigger. The facilities are amazing and Jan’s done an incredible job.” 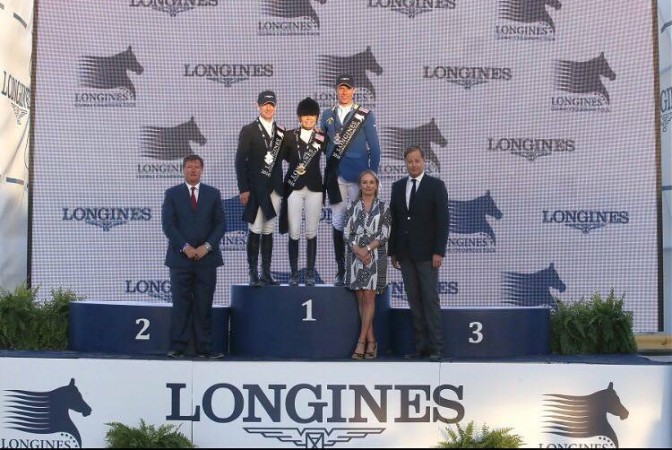 McLain Ward (USA), silver medallist: “I’d like to first say thank you to Jan and GCT – it’s great to have these events in North America; to bring up our sport to the level of Europe and for the top riders in our country it’s very exciting, so thank you. Azur is… Well everyone can see what Azur is! She’s different, I try to stay out of her way – I pulled the reins a few too many times in the jump-off. I’m proud of my horse, and my team, and on to the next.”

Christian Ahlmann (GER), bronze medallist: “First of all I was really happy with my horse he jumped three amazing rounds but my performance in the jump-off, I was not really happy. I did not have the best position – I tried, but I knew the guys behind me and that it was for sure not enough. In the end I was happy to be still on the podium but in any case my thanks to Jan for this amazing show – I go home very happy.”

All Photos by Steffano Grasso / LGCT