Colombia’s Daniel Bluman won the Rolex U.S. Open Grand Prix at the Rolex Central Park Horse Show under the lights of the New York skyline after two stylish clear rounds to claim the showpiece class of the five-day horse show. 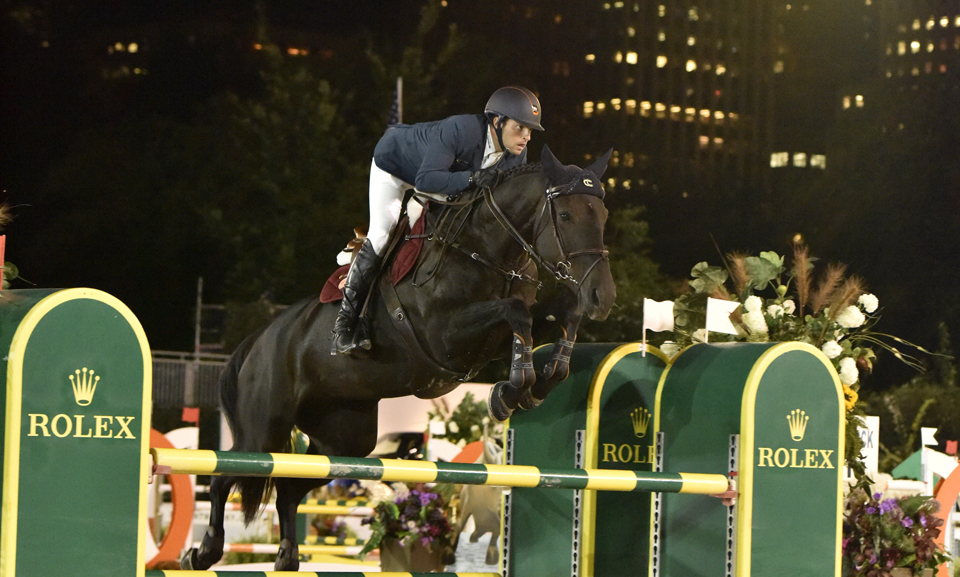 The packed grandstands cheered on Bluman after a two-way jump-off with New Zealand’s Sharn Wordley, with Ireland’s Shane Sweetnam finishing in third place. Only two riders went clear and also within the time allowed in the first round in the challenging course staged in the iconic Trump Ice Rink. Wordley was first to go in the jump-off and tactics were obvious as he steered his horse steadily, but cleanly, around the course in a time of 43.35 seconds. Bluman then entered the ring knowing one mistake would cost him the Rolex title, but he held his nerve and rode another brilliant round taking two seconds off Wordley in a winning time of 41.39 seconds.

A jubilant Bluman said afterwards: “Rolex has been sponsoring equestrian sports for a long time and I’ve always wanted to win a Rolex. I came close a few times this year and I told McLain (Ward) I really wanted that watch! So to be able to win it today in Central Park – its a crown for a champion.”

In just its second year the Rolex Central Park Horse Show has quickly established itself as one of the world’s leading iconic equestrian events, featuring top equestrian athletes at one of the most stunning and unique venues in the world with many of New York’s big names in attendance. Attempting to defend her Rolex Grand Prix title was Georgina Bloomberg, daughter of former New York mayor Michael Bloomberg, who was again at the event to cheer on Georgina. Other leading names from business and society included Donald Trump and Bill Gates whose daughter Jennifer had earlier in the evening won the Junior Amateur class much to the delight of the whole crowd. “Competing here was a dream come true” said Jennifer Gates, 19. “I’d heard about the show last year but I wasn’t able to make it. This year I jumped at the opportunity to compete here”.

Leading riders from across the globe were competing for the Rolex Grand Prix, with riders from eight nationalities competing amongst the 26 starters. The final podium was truly international with Colombia, New Zealand and Ireland finishing in first to third place respectively.

Rolex Testimonee Kent Farrington, finished seventh after another thrilling round on Uceko in the Central Park arena having knocked just one rail down after the slightest of touches in the huge triple combination.

Founder of the Rolex Central Park Horse Show – Mark Bellissimo – wanted to bring the thrill of equestrian sport to a wider audience and conceived the daring idea of staging a show in Central Park in the Trump Rink. Bellissimo said, “Rolex has been a great partner and together we have been able to turn this into a great signature event. We introduced the U.S. Open this year and we believe this will turn into something spectacular – it’s our goal to make this a five star. I don’t think there is any city setting in the world that rivals this show.”

New York City’s Rolex Central Park Horse Show was a huge success in its inaugural year in 2014, and 2015 is set to be even bigger and better, with spectacular performances from top-class horse and rider combinations over the five days across multi equestrian disciplines including Show Jumping, Dressage, Hunters and Arabians.