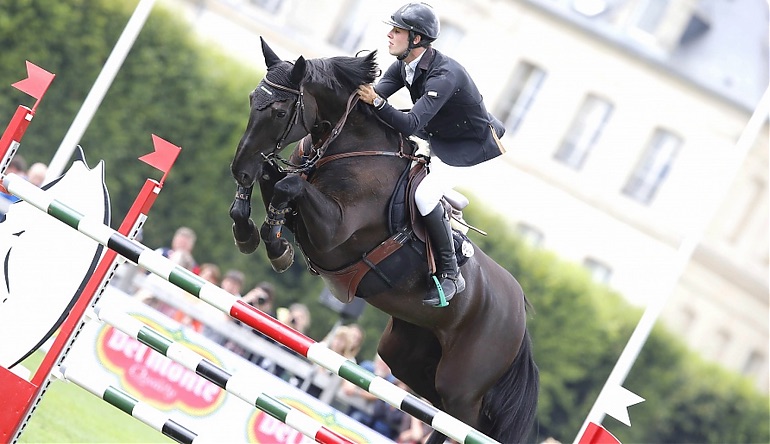 It was standing room only as the final CSI5* class, the Master Airbus Group, got underway under slightly stormier skies. Constant Van Paesschen (BEL) rode a masterful round with his stunning black 12 year old mare Diamanthina van T Ruytershof to take the title. Bertram Allen (IRL) and his bay gelding Belmonde came an unbelievably close second, just six tenths of a second behind, and Ukraine’s Ferenc Szentirmai took third with his chestnut gelding Quickdiamond.

For the first round designer Uliano Vezzani built a course to suit all classes of horse. The fair and intelligent course played artfully with the distances and forced riders to think about the strides to the fences, with the jumps raised at the full 1,50m. There was a rolling distance from fences one to two, before riders approached the first of the related distances with a wide triple bar. Most would take a full eight strides around the corner, before taking another optimum seven strides to the water tray. Next came the 1,50m vertical and planks, before the treble combination, including a short stride to the middle, and a long way to the back rail. The final section would see a gallop all the way to the double, with a big oxer to finish – and all within the time allowed of 79 seconds.

Rene Tebbel (UKR) was the first to ride a phenomenal clear round, holding the horse in a good shape all the way round and producing a cracking result. He was quickly followed by John Whitaker (GBR) and his bay stallion Argento, who both soon impressed with a fantastic performance, raising the bar for the rest of the field.

Alexandre Fontanelle (FRA) was the first of the French riders to go clear, as the thousands of fans packed into the grandstand erupted in patriotic celebration as the combination crossed the finish line. He was joined by Alexis Borrin (FRA), Roger-Yves Bost (FRA), Simon Delestre (FRA), Cedric Angot (FRA), Penelope Leprevost (FRA) who all rode stunning rounds to the delight of the crowd. A few fences caused problems, with the final part of the treble combination catching out a few.

Sixteen top class combinations, six of whom were riding on home turf, lined up for the final showdown of an exciting weekend of action packed adrenaline fuelled sport.

The jump off course looked set to be a flier, with plenty of opportunities for a gallop and only two real turns where riders could gain or lose valuable seconds. Britain’s John Whitaker was the first to set the pace with a double clear in 38.04seconds. However Bertram Allen (IRL) rode his larger striding horse to perfection, making a sensational turn to the third fence, the CWD vertical and galloping to the last to finish in 36.77s. Simon Delestre (FRA) looked hot to change the order and finished with the leading time, however he clipped the last fence behind and finished 9th.

It was down to Constant Van Paesschen (BEL), who rode an incredible round to pip Bertram’s time in 36.71 with Diamanthina van T Ruytershof. Constant held her off the vertical and released into the double, making an audacious turn back to the fence and galloped flat out to the last.

The Tour now moves to the beautiful surroundings of Syon Park, London, from the 24th – 26th July for the eleventh leg of the championship race. With just three points between current ranking leader Luciana Diniz (POR) and world number 1 Scott Brash (GBR), both of whom will be in London, it’s set to be a dramatic race as the title battle continues.