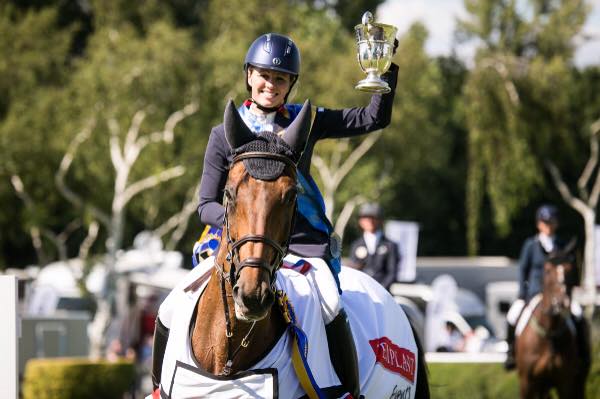 A total of 26 riders came forward for this prestigious national final, which is open to the highest-ranked riders on the Area/International points league. Aptly, Chloe topped the list in 2014 and was a worthy winner of today’s £12,000 Queen’s Cup at the Longines Royal International Horse Show. She also picked up the trophies for the highest-placed lady rider and the best under-25.

Six riders made it through to the jump-off, with first to go Tina Fletcher and Hello Sailor setting the standard with a clear round in 53.32sec. Kerry Brennan (Wellington M) made a valiant attempt to better the time, but finished just one hundredth of a second in arrears. Regular Hickstead winners Trevor Breen (Old Town KC) and Timothy Davies (Valentijn O) both lowered a pole each to keep them out of contention. But Chloe Winchester set an unreachable new target of 49.57sec, a time so quick that even Phillip Miller and Caritiar Z were some three seconds slower.

“It’s a dream come true. The plan was to just keep going forward because I knew Phillip was coming after me,” said Chloe, who is part of the British squad at next week’s FEI European Young Rider Championships in Austria. “I obviously did more kicking and flapping than Phillip!” she added.

Chloe got the mare from an eventing yard and has produced her up through the levels to 1.50m classes. “We jumped here at Hickstead at the All England Jumping Championships last year, but nothing like this,” she said, adding that it was the biggest win of her career.

Phillip had to settle for runner-up spot with his 2013 Hickstead Derby winner, Caritiar Z. “I didn’t see Chloe’s round, but a few people had said to me how fast she was and I was never going to make up three seconds,” he said.

The Italian riders had a day to celebrate after their disappointment yesterday when finishing at the bottom of the leaderboard in the Furusiyya FEI Nations Cup. Piergiorgio Bucci headed a huge class of 48 starters in this morning’s Bunn Leisure Salver, winning on the 11-year-old stallion Casallo Z.

Having started the day with a win, the Italian contingent had further reason to celebrate when Lorenzo De Luca and Homer De Reve won the British Speed Classic. Britain’s Guy Williams – who is renowned for his prowess against the clock – was some 1.35sec slower than the Italian rider, which shows just how blisteringly quick he was today.

Tickets can be bought online at www.hickstead.co.uk and will also be available at the gate.

Vicky tops the bill on Ladies’ Day
Vicky Prescott finished her week at Hickstead in style by taking the top prize in today’s Ladies’ Day competition, held in aid of the Mark Davies Injured Riders’ Fund.

Vicky has been coming to Hickstead for 25 years, and this year she took part in the coloured horse classes with her horse Royale Kristal. Although she didn’t pick up any placings on Tuesday, she more than made up for it today.

Having been selected as the overall winner by the guest judges, showjumpers Scott Brash and Jay Halim, Vicky won an overnight stay for two at Ockenden Manor Hotel & Spa. She plans to take her mum with her as a thank you for convincing her to enter Ladies’ Day and for helping Vicky with her horse all week.

Wearing an elegant grey dress and a pink hat from a shop in her local town, Warrington, Vicky commented that her shoes were her favourite part of her outfit. As a keen racing fan, Vicky has been to Ladies’ Day before at Aintree, but Hickstead is her first win in such a competition.

“I’ve just come running down the hill from the lorry park in my heels!” she explained afterwards.

Vicky’s father couldn’t believe that after all the years of trying to qualify for the International Arena at Hickstead, it was a dress that had finally got Vicky there and not a horse!

Completing the line-up were Jean Weston in second place and Melissa Newman who came in third. Jean won an overnight stay at the Ockenden Manor Hotel & Spa, while Melissa will get to enjoy an amazing eight-course dinner at the michelin-starred Pass Restaurant at South Lodge Hotel.

The top 10 finalists were joined in the arena by TV presenter Davina McCall and supermodel Jodie Kidd, who were both enjoying the top-class showjumping today at the Longines Royal International Horse Show.