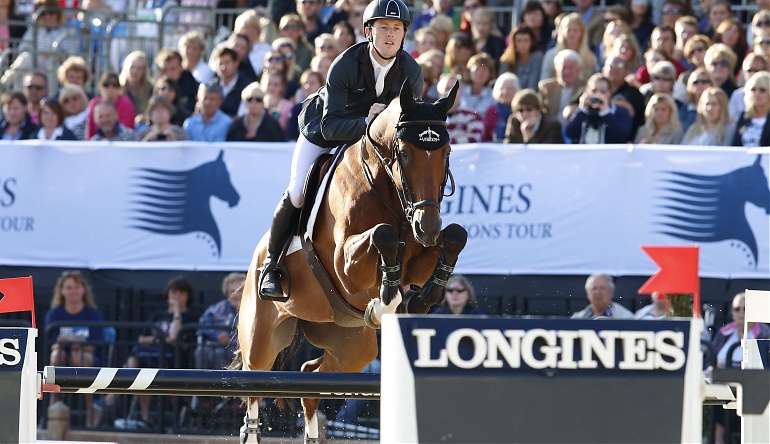 World Number 1 Scott Brash, Ben Maher, Michael and John Whitaker will be just three of the top British names in attendance at the Longines Global Champions Tour of London this weekend in Syon Park.

With the Championship battle reaching a dramatic point in the season – with current leader Luciana Diniz (POR) just three points ahead of Scott Brash (GBR) both riders will be pulling out all the stops in what is set to be another thrilling leg as we head into the 11th round of the circuit.

There will be a strong British turnout for the London Grand Prix, with four big Whitaker names competing – John, Michael, Robert and William – in the Longines Global Champions Tour Grand Prix of London Presented By Qatar on Saturday 25th July. Ben Maher (GBR) will be looking to repeat his stunning 2013 Grand Prix win on Cella at the Tour’s debut in London and looks to be on strong form following his CSI5* win on the final day in Paris just a few weeks ago. Ben said: “Global Champions Tour holds one of the greatest memories for me, it was one of my best ever wins with Cella. I encourage everybody to come and watch and support our riders that weekend. It is entertaining, fun and some of the best possible sport you will ever see.”

2014 London Grand Prix winner Scott Brash (GBR) will bring his famous gelding, Hello Sanctos, and be looking to do the double by winning the Grand Prix and earn the top spot on the ranking board.

Scott Brash commented on the upcoming event: “It is a great feeling to ride in front of your home crowd; the British fans are so supportive and I’m always grateful to see how strong the show jumping community is. I go into every round focused on doing my best, but there’s a certain feeling and energy you get when you know the crowd around you are literally cheering for you; it’s pretty special. Because there are some of the top names in British show jumping competing this year, I think there will be an extra energy; individually for the riders of course, but also collaboratively as everyone will want us to do well! That’s a good feeling.”

The stage is set for an action packed weekend of world class sport. The competition will kick off on Friday 24th July at 14:00 local time with the first CSI 5* competition. The Grand Prix will be broadcast live on GCT TV, BeIN Sports, Class Horse TV, Equidia Life and live from the second round on Eurosport at 18:05 (please check local listings).