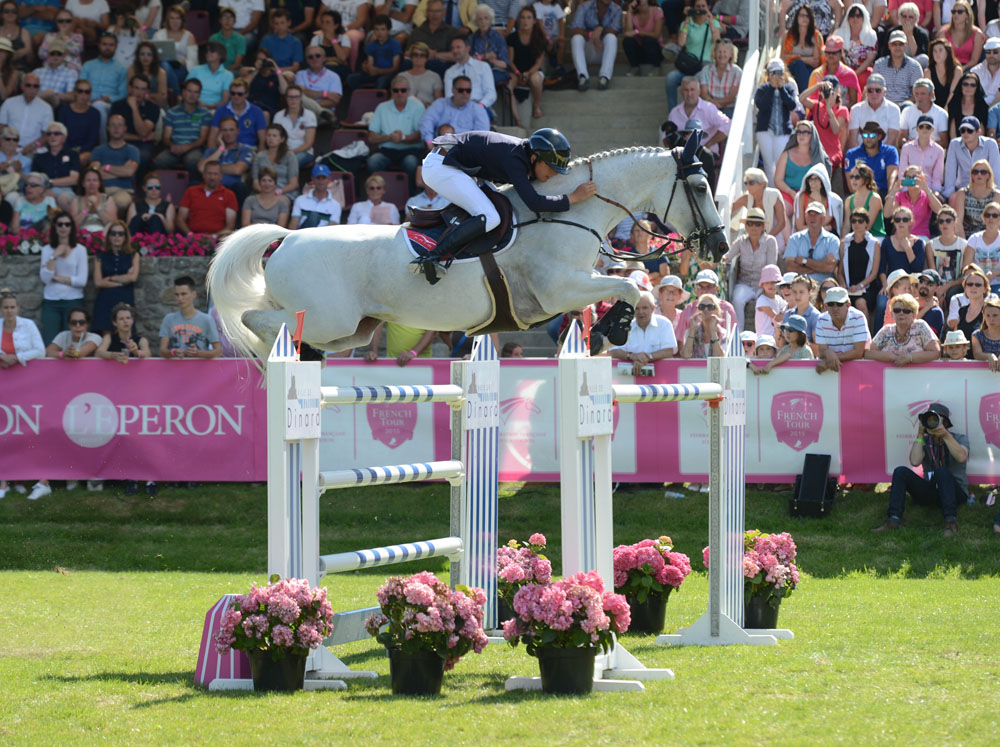 Incredible scenario for the Grand Prix of the city of Dinard, since the public had to wait for the 22nd contender, Kent Farrington to ride the course to watch a perfect clear round that finally opened a jump off with five riders. In this small elite group, three French riders, Kevin Staut, Aymeric de Ponnat, and Jérôme Hurel, but also the young Irish prodigy, Bertram Allen, who was celebrating his 20th birthday yesterday, and was riding Molly Malone for the occasion.

After a tough battle, the young rider, definitely unbeatable, clinches victory one more time at the highest level, with disconcerting ease, in a time of 46″54, in front of Kevin Staut (Rêveur de Hurtebise), clear as well, in 46″95, and Jérôme Hurel (Quartz Rouge), who crosses the finish line without a fault, in a time of 49″14. Aymeric de Ponnat has one rail down, and finishes 4th, in front of the American, who scores 12 points. This 2015 edition of the new CSI5* of Dinard will leave a very positive impression, not only to some of the best riders and horses in the world, who will be back, for sure, but also to a record number of 14000 people who showed enthusiastic support to their champions for the Derby and the Grand Prix.

Bertram Allen (IRL), n°1
He is very pleased with his mare. “It was a difficult decision for me to bring her here and not take her to Dublin next week because it is the most important show of the year for us, but I hope this will be a good preparation for the Europeans.”

Kevin Staut (FRA), n°2
Kevin Staut is a little disappointed about the way he rode the beginning of his jump off, where he lost time, but still very happy about Rêveur de Hurtebise HDC.

Jérôme Hurel (FRA), n°3
“When I watched the first riders at the beginning of the class, I thought I would never make it within time allowed, so I am very happy about Quartz, but he always takes a little more time than another horse between and over the jumps, which makes it a little difficult to beat the fastest riders.”