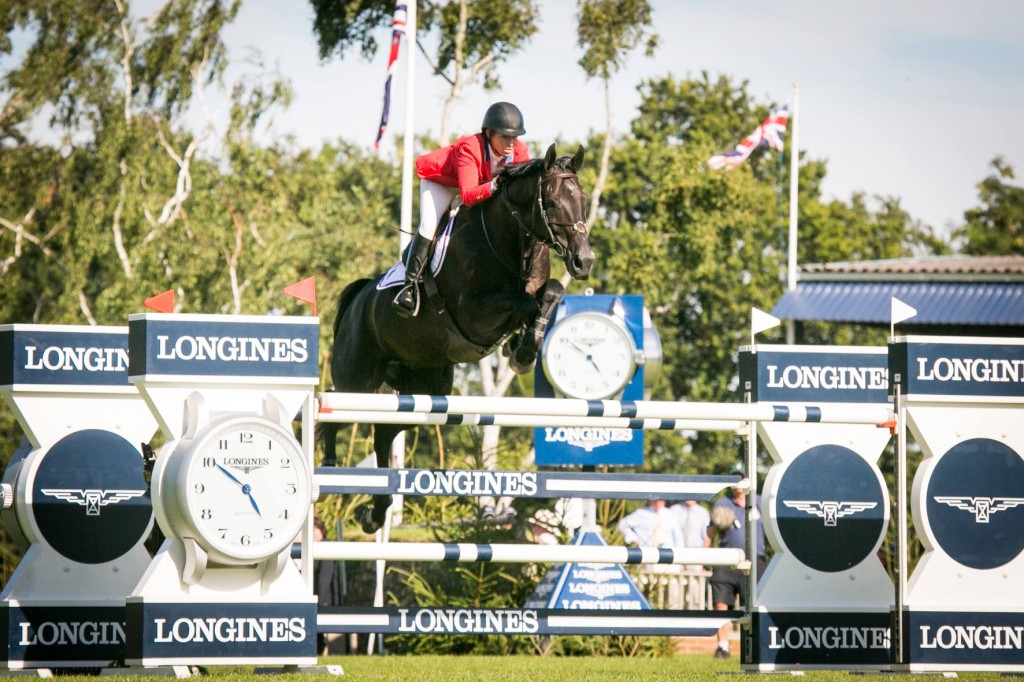 As the reigning victors, Beezie and the 13-year-old Cortes ‘C’ started favourites for this year’s renewal, and today they looked just as strong as they had 12 months ago. In 2014, she became the first lady winner of the class and today Beezie made history once again by becoming the first female rider to win the class in consecutive years.

The 52-year-old rider obviously meant business after Friday’s Furusiyya FEI Nations Cup, in which she jumped-off for the US team, but had an uncharacteristic 8 faults. “It’s quite an honour to win it back to back,” said Beezie. “Friday’s jump-off was not my finest moment, but I learned a little from that as he likes to jump left and I took too sharp of an angle and didn’t compensate. I know he’s amazingly naturally fast and that I could leave strides out, like the right turn to the vertical and at the second last fence, so I really tested him there and was able to coast home a little. I knew there were a few fast ones behind me, so I had to respect that, but I didn’t want to run the wheels off and have what happened on Friday.”

Cortes obviously relishes the famous turf of the International Arena. “He really prefers grass over sand – he really loves it here,” Beezie added.

Kelvin Bywater’s 1.60m course certainly posed a challenge today, with some of the world’s top riders not completing the track, including Guy Williams and John and Michael Whitaker. The double of gates after the water jump was particularly influential, causing 22 out of the 42 combinations to fault.

Six riders made it through to the jump-off, including Beezie and her fellow American Todd Minikus, Penelope Leprevost (FRA), Jur Vrieling (NED) and two of Britain’s brightest young talents, Jessica Mendoza and William Whitaker.

Jur Vrieling set the pace with a clear in 49.54sec, but Beezie then knocked more than 6sec off the time to take the lead. Todd had four faults, before Jessica attempted to net a home win and came incredibly close – finishing 0.3sec quicker, but knocking the very last fence to end up in fourth. William Whitaker was last to go, but he was nearly a second in arrears of Beezie’s time with one down, finishing in fifth place.

Jessica Mendoza – who was reserve for Friday’s Nations Cup team – was unlucky not to win and truly marked her card as one to watch on the international stage. But competing in this historic 109-year-old class, which was only opened up to lady riders in 2008, didn’t phase her at all. “I wasn’t really that nervous, but my Dad was more nervous than I was – he kept going on about how this was the most prestigious class and how he’d love us to win it!” she said.

In the Underwood Supreme Pony Championship, the title went to Susie Eddis and Beat The Boss, the winner of the BSPS Supreme Working Hunter Pony Championship, while the British Horse Society Supreme Horse Championship went to top producer Jayne Ross and the hunter Time 2 Reflect.

Today saw the Longines Royal International Horse Show reach its conclusion, and indeed the 2015 international season has now drawn to a close. But the All England Jumping Course will still play host to a number of major events this year, including the Hurstpierpoint National Schools and Pony Club Jumping Championships (6th August) and the All England Jumping Championships (3rd-6th September). The International Arena will also play host to the showground’s first music festival when the inaugural Boomerang Hickstead is held on the 12th and 13th September.