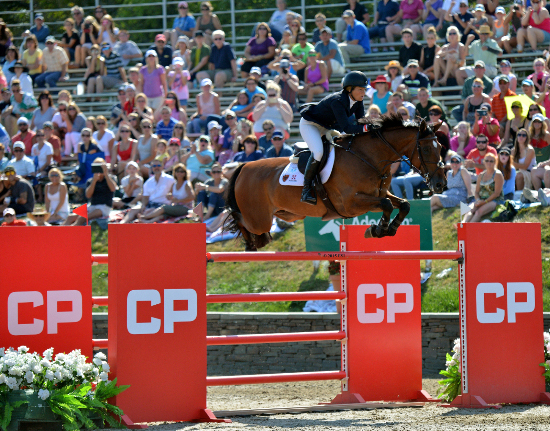 Sunday at HITS-on-the-Hudson in Saugerties, New York was anything but an average day of show jumping competition. Horse sport royalty descended on the Hudson Valley for the nation’s highest ranked class of the year, the Canadian Pacific $1 Million Grand Prix FEI-CSI 5*, presented by Wells Fargo. Only one would be so lucky to return home with the big check and blue ribbon, and that one was none other than Beezie Madden, of Cazenovia, New York, aboard her iconic mount Simon, owned by Abigail Wexner.

Thousands of spectators filled the grandstand and hundreds more watched from the Legend VIP to get a glimpse of the historic event before them. The sixth annual seven-figure Grand Prix held in Saugerties, debuted as a FEI CSI-5* on September 6 and attracted the top riders from across the world.

A field of forty-one gave it a go over the course set by Steve Stephens of Palmetto, Florida. It was evident as soon as the class began that the track demanded a high level of athletic ability and mental toughness with the first five entries scoring six faults or higher. Sixth to appear at the in-gate was a newcomer to the 5* circuit scene, Nikolaj Hein Ruus and Gerardo Pasquel’s Big Red.

They carefully completed the course with no jumping faults, but in a time of 94.650, just four seconds over the time allowed, leaving them with two time faults and the lead.

“This was my first 5*. I was very, very happy about it,” said Ruus. “He [Big Red] is a little inexperienced and for me, it’s my first really big show. I’ve only had him over the summer and I work him every day.”

“I always thought ‘Could I compete with these guys? That would be so nice to find out one day.’ And here I am. It’s like a dream come true,” he continued.

Onlookers grew anxious, hoping for another clear round but the next twenty-six contenders entered and exited the ring with down rails in their path. Thirty-third in the order, Madden came into the ring with determination in her eyes, never veering from her plan for success.

They weaved through the course, navigating their way over the tricky Liverpool and above the sizeable triple bar that many others had trouble with. The crowd erupted in cheers as Madden crossed the timers with a clear track behind her and a time of 88.320 to bump Ruus from the top.

“I think it was a difficult course. I thought so even when we walked it,” said Madden. “This is about as hard as it gets other than the Olympics or World Championships.”

With only eight left in the order of go, each trip kept fans on the edge of their seats. Pablo Barrios riding his own Antares, Conor Swail piloting Ilan Ferder’s Viva Columbia, and 2014 Saugerties Million victors, Todd Minikus and Quality Girl, owned by Quality Group, all fought to follow in Madden’s footsteps and go clear but were unsuccessful in their efforts. Then, two-time Million winner McLain Ward and Sagamore Farms’ Rothchild entered the ring thirty-ninth, and anyone who’s anyone knew he would give Madden a run for her money.

Eager to make this his third $1 Million Grand Prix victory, Ward zipped through the course but had a rail at C of the triple for four faults and a time of 84.500 for third place.

“It started off right away with a big triple bar, then a very big power test with a double oxer with one stride which you don’t see too often. It really takes a world class horse,” said Ward about the course. “Later there was a very careful triple combination, three verticals with a Liverpool behind, and then some big single fences at the end. So you had many places to make a fault and I think you saw that.”

The final two riders of the afternoon, and the last two opportunities for a jump-off, were Margie Engle with Royce, owned by Elm Rock Partner’s LLC, and Daniel Bluman on his own Conconcreto Sancha LS. Both finished with 12 faults, leaving the current leaderboard intact and confirming a one round sweep for Madden.

From any seat in the house, Madden’s beaming smile prevailed as she reappeared for her victory gallop and took center stage once again.

“Simon went beautifully. The round went pretty much exactly as I wanted it to and he tried his heart out. I couldn’t be happier with him,” said Madden. “I’ve had him for three years and that was one of our best rounds ever.”

It was unanimous amongst the top finishers the impact 5* classes have on the sport and they graciously gave credit to HITS President and CEO Tom Struzzieri, as well as the sponsors.

“Thank you to Tom for making this a 5*, and for making Thermal a 5*,” said Madden. “It helps us as riders and brings more importance to the sport as well. I think that show today was a super day. Thank you Tom, Canadian Pacific, and Wells Fargo.”

Ward agreed, adding, “I think there were several parts of the course that were very hard – which it should be, it’s one of the biggest Grand Prix in the world. I think that the standard of horses and riders was very high this year, being a 5* event, and we can thank Tom for that.”

The HITS Championship marks the close of the eight week HITS Saugerties Series. The next event on the HITS competition schedule is the Marshall & Sterling Insurance League National Finals September 9 -13 at HITS-on-the-Hudson. The Marshall & Sterling Insurance League is a grassroots organization dedicated to providing competition for up-and-coming Children’s and Adult Hunter, Jumper and Equitation riders. For more information please visit, www.HitsShows.com.