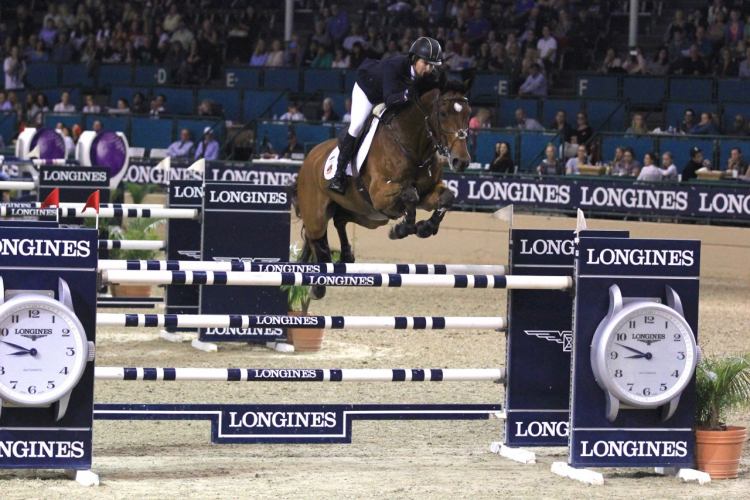 Against a field stacked with seasoned, international competitors, Beezie Madden (USA) reinforced her ranking as the USA’s number one Jumping athlete, and the world number two in the Longines Rankings, by riding the fastest clear in an eight-man jump off.

The stands in the indoor venue were packed as Madden strategically maneuvered 16-year-old Dutch Warmblood gelding Simon (Mr. Blue x Polydox) to the win in 37.33 seconds, over a second faster than Jack “Hardin” Towell’s 38.75-second round.

“I saw a couple of the earlier rounds, thanks to the TVs that Longines now provides in the schooling areas,” Madden said. “I planned to do seven strides up the first line, same as the others, but then to catch them on the turns later in the course.

“I actually didn’t see Hardin go, but I think my turns at least to the double combination and probably after the double combination – my horse is brilliant with that. He has a lot of practice trying to do short turns because running isn’t always his best thing. But I have to say, he and I together are figuring that part out a little better and doing seven up the first line wouldn’t always have been in our plan, but tonight and the way he’s been going lately, I’m very comfortable doing that with him. Indoors especially, he can be really fast with the short turns.”
Madden’s plan worked accordingly, and she and her veteran mount shaved additional time with tighter turns than the rest of the field.

“Simon has been my World Cup Final horse for the last three years,” according to Madden. “He doesn’t really have any quirks except that he whinnies at the in gate every time before he goes into the ring. He’s a pleasure to deal with and to ride.”

Earlier in the year, Madden helped launch the inaugural Longines FEI World Cup™ Jumping North American League, but tonight’s event was the first of the series that she could attend, without conflicting with her international commitments. She recently returned to the United States after competing on the country’s all-female team at the Furusiyya FEI Nations Cup™ Jumping Final in Barcelona in September.

“I like that the North American League has reduced the number of qualifiers and number of scores that count toward qualifying for the Final,” said Madden. “It gives more opportunities for international competition. This is the first one I’ve done in the League, but I can still get enough in to get four good scores and not really over jump my horses.”

The next qualifying class for Madden will be aboard Breitling LS (Quintero x Acord II) in Lexington, Ky. on November 1, followed by the East Coast stops in Toronto, Palm Beach, and Ocala. Madden will also compete in the CSI-5* in Thermal on November 8.