With 41 riders from throughout the world competing in the 1.50/1.55m CSI5* class, the crowds packed themselves around the arena and in the VIP hospitality in anticipation of the final competition of the weekend. Under the view of the Eiffel Tower, the high profile combinations once more took to the 55 x 28m sand arena. As the competition unfolded the triple bar down to a double of verticals caused many of the top riders to pick up faults in a course that was particularly challenging at the end of an iconic weekend in Paris. Just three went through to the electrifying jump off, with Edwina Tops-Alexander (AUS) riding a faultless first round with Heidi du Ruisseau Z to earn the first of the jump-off spots. She was soon followed by Karim El Zoghby (EGY) who delivered an equally stunning round on his ten year old bay mare Amelia to join her, and third last to go Ben Maher (GBR) with the effortlessly stunning Cella made it the magic three in the final.

First to go Edwina Tops-Alexander (AUS) laid down the gauntlet with yet another flawless round to the admiration of the crowd, setting a superb time of 33.63. Karim El Zoghby (EGY) was next and pushed the pace with his mare Amelia to come home clear in 31.85 – a phenomenal time against the clock. His fast round looked unbeatable due to the pace of his mare, and as Ben Maher (GBR) entered the arena the crowd went silent in excited anticipation of the final result. Despite riding his grey Cella at a more considered pace, Ben Maher’s precision and tight turn to the last allowed him to finish on an identical time to Karim El Zoghby – a feat extremely unusual in this level of competition.

Karim commented: “Today was a super day, as soon as I sat on my mare in the warm up I felt she would be really good. We were lucky – you need some luck – but she jumped great and really did her best for me so I love her for it. I thought the course was more difficult than yesterday as a track – yesterday was straightforward big, today you had a lot of options everywhere. I was lucky that I was towards the end so could watch enough riders and see where the challenges were, so it was the luck of the draw. It’s a new experience for me to share the podium, but I’m very happy.” 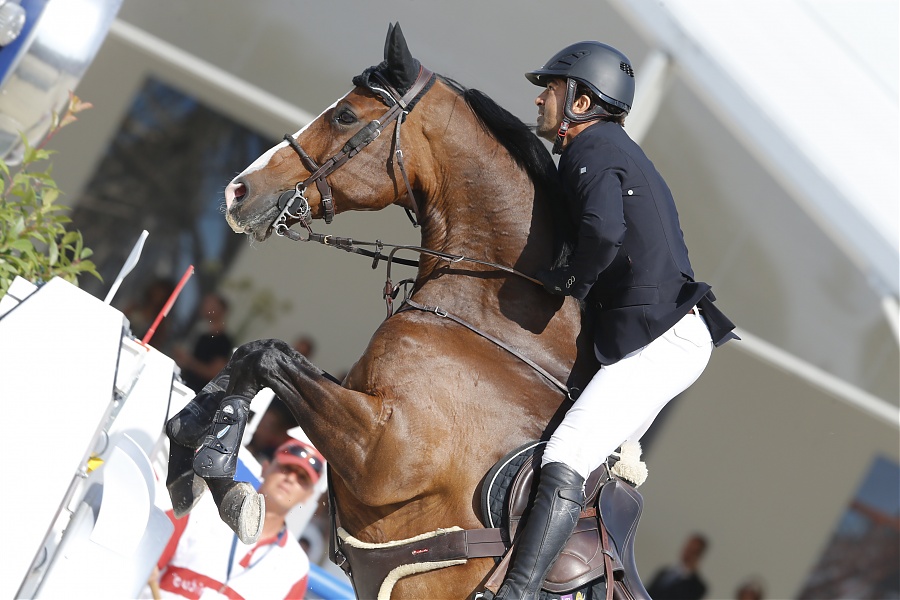 Ben too spoke of the unusual result: “Luckily I had my best mare today, which made life a little easier. I don’t think it would have mattered if there had been three or fifteen horses in the jump-off as it was an incredibly fast round and I don’t think we could have done any more today; it was exciting for the people watching I’m sure. In sport everyone likes a clear winner, but it was hard to separate the horses today and I’m very happy with the result.

“It’s a first for me to have a joint podium, and certainly a first that I’ve seen in that level for a long time – maybe in a smaller competition, but to be joint around such a big course is unbelievable and it will be interesting to see the split timing.”