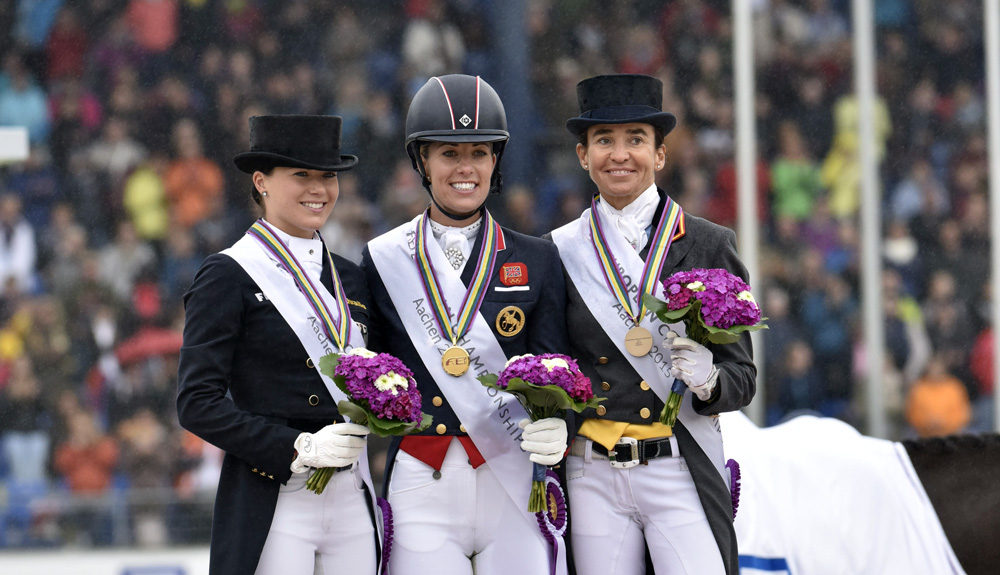 (Aachen, Germany 16 August 2015) True champions are made from something they have deep inside them, a desire, a dream, a vision. Today, in front of a 38,000 strong crowd, Charlotte Dujardin of Great Britain proved that she is an undisputed champion by sealing victory in the D3 Deutsche Bank Individual Grand Prix Freestyle, and retaining her European title, with a score of 89.054%.

Charlotte, riding Valegro, was last to go in the final 15 on the closing day of a week-long dressage extravaganza. Tensions were high for the British rider who had to beat an impressive score, and a lifetime best of 88.804%, from Germany’s Kristina Bröring-Sprehe, riding Desperados FRH. Though we have come to expect great things from Charlotte and Valegro, the pressure mounting from the home-crowd spectators was palpable. It was a test of real metal strength for the duo in the impressive Aachen arena.

Despite the rain and the intense pressure, Charlotte and Valegro rode a beautiful test and placed first, scoring 89.054%. Crowd favourite, Kristina Bröring-Sprehe was placed second – the young rider (28), has had a fantastic week at the FEI European Championships, contributing to Germany’s Team Bronze medal and finishing second in yesterday’s Grand Prix Special.

Following her win and when asked about Kristina’s impressive score, Charlotte said; “Well that is sport and that’s what keeps it exciting. It would be really boring if I was winning by miles all the time but Kristina is catching me, and even Edward on the Grand Prix….. We’re going to go back home and work on it, we’re going to Olympia and also preparing for Rio, so don’t worry, I won’t be giving up easily!”

Spanish rider Beatriz Ferrer-Salat also produced an impressive display of horsemanship to place third on her horse Delgado. Beatriz started competing Delgado in 2009, the pair have been hit with injuries over the years so it was incredibly enjoyable for equestrian fans to see them back on the podium.

The dressage element for this years’ 2015 FEI European Championships has seen participation figures at an all-time high, with the definite entries revealing a massive 20 nations and 72 horse-and-rider combinations entering. 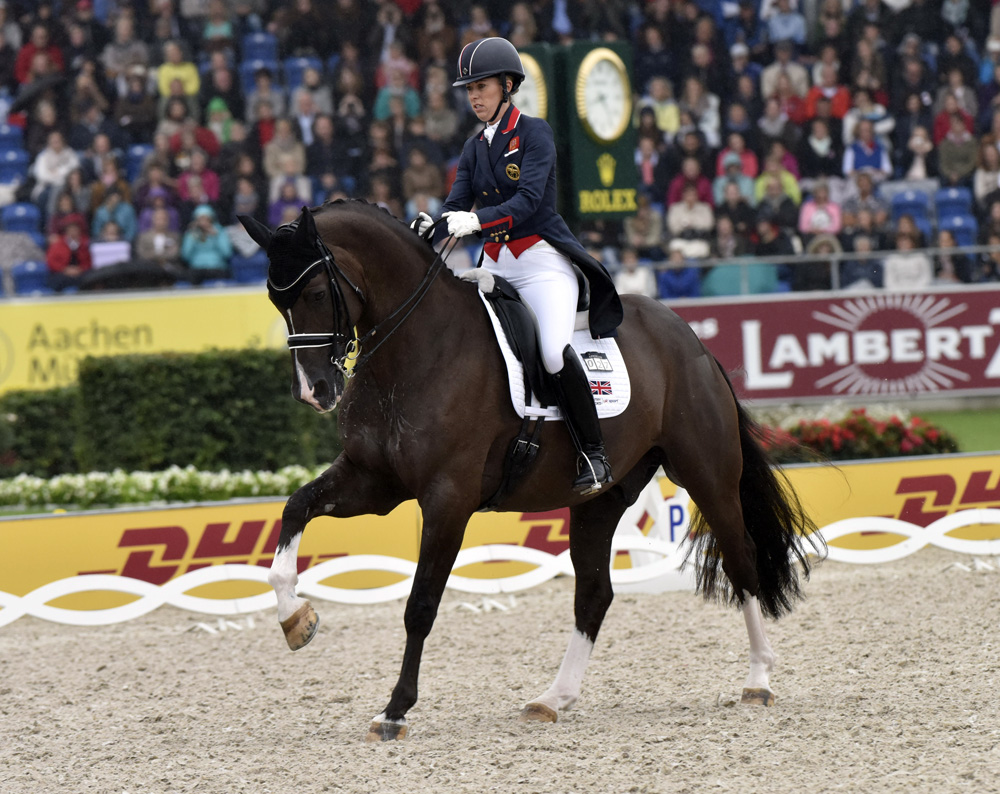 Whilst individual success may have escaped her this year, Rolex Testimonee, Isabell Werth, riding Don Johnson FRH, made a great contribution to the German team claiming Bronze earlier in the week. Yesterday’s Grand Prix Special saw the duo placed seventh, despite a small error, with a strong score of 75.924%. Today’s Freestyle test saw the pair ride an impressive and captivating display to place fourth with a score of 82.482%. After her round, Isabell said “I am completely happy with him. He came out of the shadow of Bella Rose and I’m really happy for him and proud. It was so emotional in front of that crowd. To do it here in Aachen is so great, I’ve been coming here for more than 20 years and have had such great victories so it was like a victory today.”